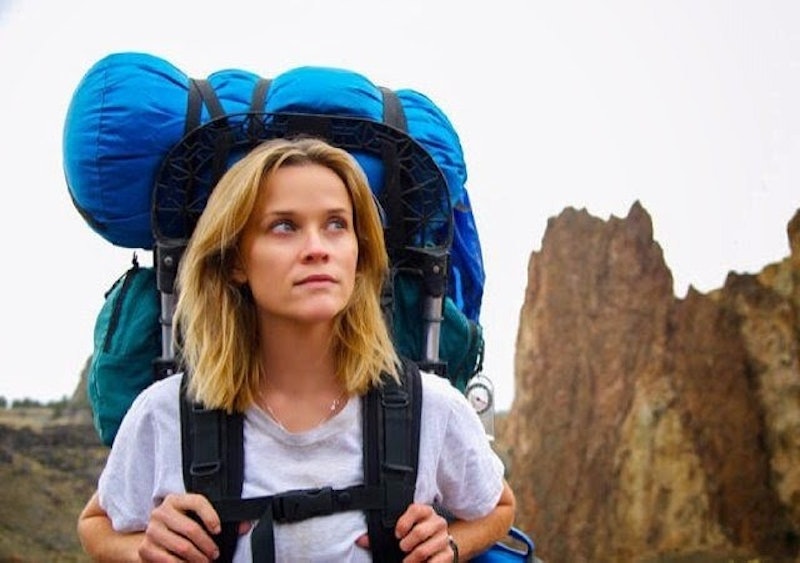 "The book was better." That's almost always the unanimous cry from readers whenever a beloved book gets turned into a movie. While more often times than not that's the case, 2014 has proven the theory wrong with spot-on adaptations of The Fault In Our Stars , Gone Girl , and now, Wild . Director Jean-Marc Vallée (Dallas Buyers Club, The Young Victoria) and writer Nick Hornby (About a Boy, An Education) have brought Cheryl Strayed's astounding, inspirational memoir Wild: From Lost to Found on the Pacific Crest Trail to the big screen, and it stays pretty faithful to the original text.

It's safe to say that the cinematic version of Wild (which stars an Oscar-worthy turn from Reese Witherspoon as the flawed, but achingly human Cheryl) captures the essence of Strayed's journey, both spiritually and physically. Wild follows Strayed's 1,100 mile hike on the Pacific Crest Trail as she tries to find herself and pick up the pieces of her life after the loss of her mother and the collapse of her marriage. But in terms of details, both big and small (the book is full of them), how true does the movie stay to the book?

Now, let's point out the obvious: there's no way in hell that a two-hour movie, no matter how effectively it uses its time, is going to catch every nuance and detail that a 300-plus page book can. Especially a book that's written from the perspective of the person who lived it. (Hornby is a tremendously talented writer, but only Cheryl Strayed can ever truly capture the essence of the life of Cheryl Strayed.)

WARNING: MAJOR SPOILERS AHEAD ABOUT THE MOVIE WILD.

Wild fans will be happy to know that can't-leave-out details from the book, including Cheryl's unfathomably heavy backpack Monster, her too-small boots (not to mention her makeshift duct tape sandals), her lost toenails, her handy water purifier, and her affection for Snapple are all featured on screen. Even smaller, but memorable moments like when she wakes up covered in frogs, thankfully made the final cut.

Of course, it's not just her exhausting, exhilarating time on the trail that makes up the heart of Wild. Strayed's story is one of great love and great loss, and the flashbacks to her life before her fateful journey on the PCT are just as important. The big screen version of Wild shows Cheryl's deep, close relationship with her mother Bobbi (played by the great Laura Dern) and how her death caused her to fall apart at the seams and spiral into a life of drugs and carrying on multiple affairs. Absolutely pivotal moments from the memoir—like when Cheryl eats some of her mother's ashes, and the heartbreaking execution of Bobbi's beloved horse— were, wisely, not cut from the movie, though they do not carry nearly the same emotional heft and devastation as they do in the book.

While the movie does stay close to the book, the most noticeable omissions are some of the other important people in Cheryl's life, both on and off the trail. The film does catch up with most of the other hikers Cheryl comes across on the PCT, even if we only get a passing glance of them. (In the book, we get to know these hikers very well, while the movie treats them as very minor characters.)

However, the biggest difference in the movie version of Wild is the exclusion of both Cheryl's sister and her stepfather. Both of these people were a major part of Cheryl's life, so for anyone already familiar with her story, it's hard not to notice their absences on screen.

Still, even if Wild didn't perfectly capture every detail of Strayed's best-selling 2012 memoir, it's hard to imagine that fans of the book still won't be happy with the respectful, loving adaptation or the chance to revisit the steps of this awe-inspiring journey once again.