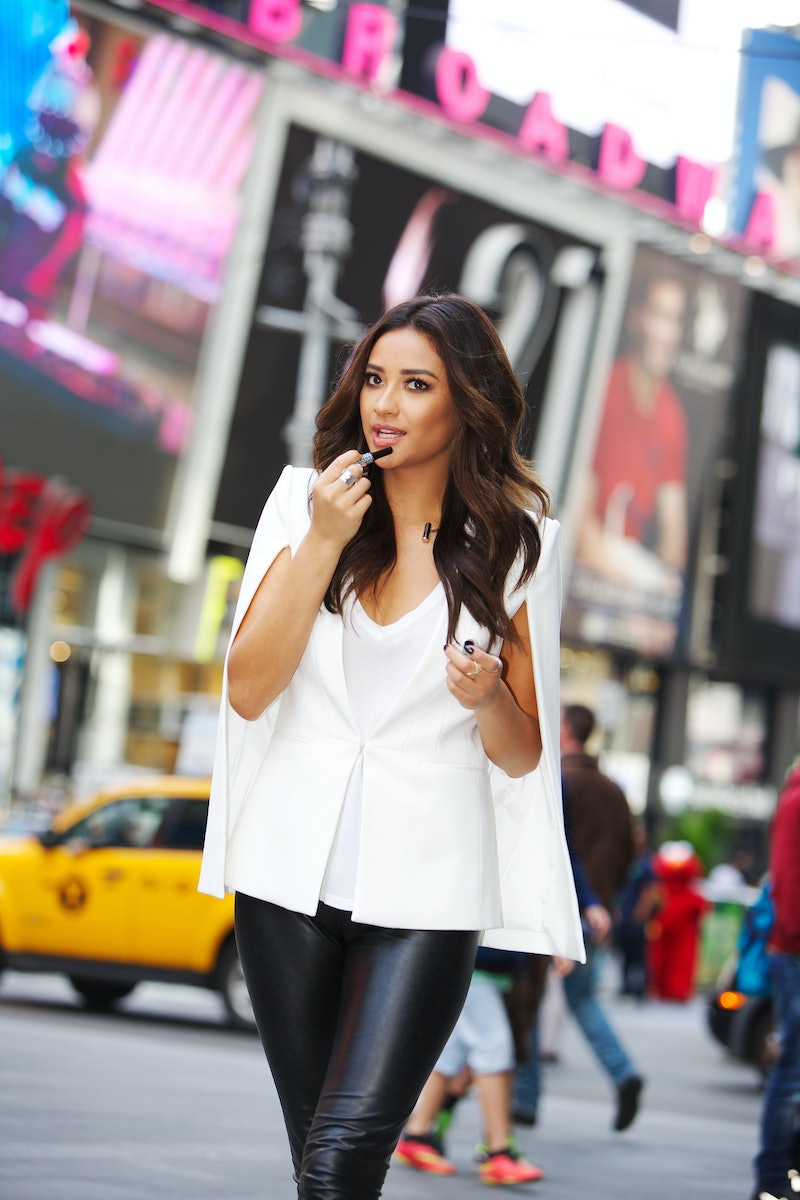 Let's all be honest: Is there anyone out there with stronger beauty game than Shay Mitchell? I think not (and for the record, I rather geekily called her beauty game "off the charts" when I interviewed her, and being the super nice and gracious person she is, she thanked me, instead of slowly backing away like most people would have). Recently, Shay Mitchell started Amore & Vita, a lifestyle/fashion/beauty blog, with her best friend, so we've all gotten a little peek into your daily routine — but I wanted more.

Well, as it would turn out, the key to Mitchell's beauty prowess (outside of genetics, of course), is all about being adventurous. We chatted for about 15 minutes, and that was what I took away re: her approach to life in general — don't be afraid to try new things! It's a good maxim to live by, especially when it's a frame of mind that often takes you overseas philanthropically (she told me she recently went to Africa with Free the Children), and gets you trying crazy lip colors. "I love playing around with different lip shades, all the time," said Mitchell, adding that she's particularly fond of dark, dramatic shades.

For Shay, it would seem all of the traveling (both for fun and for her various causes) dovetails nicely with her makeup adventurousness — she said, "When I go on vacations, I pull out the brighter [lipsticks]," adding that she went for a "deep plum" during a recent trip to New York. Coconut oil's another thing that tops her travel checklist, as it's a multi-tasking product for both hair and skin (especially after a little "too much sun" in Bali), along with the also-multi-tasking tinted moisturizer ("it kind of knocks out three birds with one stone — it's SPF lotion, moisturizer and a little bit of foundation, so that's always easy and fast").

Of course, it made a lot of sense when she got named as the newest face of Carmex (Carmex Moisture Plus, to be exact), what with her super-duper beauty know-how and everything. Plus, she's actually got some nice history with the brand — she referred to that "infamous yellow and red tube" as her "first accessory [she] ever got," and recalled the first time her father ever bought it for her (to protect her against the scary, Canadian winter). She called the whole thing "a cool and fun, organic partnership."

And in that vein I had to know all of her top five drugstore faves (actually, I would have asked that anyway, but her new gig made it all the more relevant).

OK, well, maybe she kinda had to say this, but it isa pretty legit product. "It is so important to have a good base. It's moisturizing your skin, and it's moisturizing your lips, a lot of people forget that. I could put on lipstick on my lips, but if I don't have them moisturized, it's not going to look good. So, first it would be Carmex Moisture Plus Lip Balm."

Mitchell also added that she's a huge fan of the products new makeover(s) — "It's shaped like a lipstick, and the packaging is really cool, and it's great because I can switch it out."

"The body lotion is really awesome too. I love it, I'm always lotioning it up. Not a lot of people know they have lotion, but they do, and it's amazing."

"Neutrogena makeup wipes are great, because when I'm traveling I just take my makeup off on the plane and stuff like that, and I always have a package next to my bed."

"Listerine breath strips. I always have those in my purse."

A bit off the beauty beat, but I also had to take the time to personally thank her for her recent comments re: growing up mixed race in an all-white neighborhood. As someone who grew up wishing every day for blonde hair (sometimes I still do, but more in a Soo Joo Park kind of way), I think it's something that bears taking a look at, especially when Shay is one of a small handful of Asian American actors out there in a only-slightly-larger pool of actors of color. She rather graciously replied:

I grew up in a predominantly Caucasian community, and all of my friends were white, so it was difficult — and that's why I thought, "If I felt that way, there must be a lot of other people that felt that way too," and so I thought I should share the story.

To which I can only say, keep on keepin' on, Shay! And thanks for sharing your beauty adventurousness with us all.