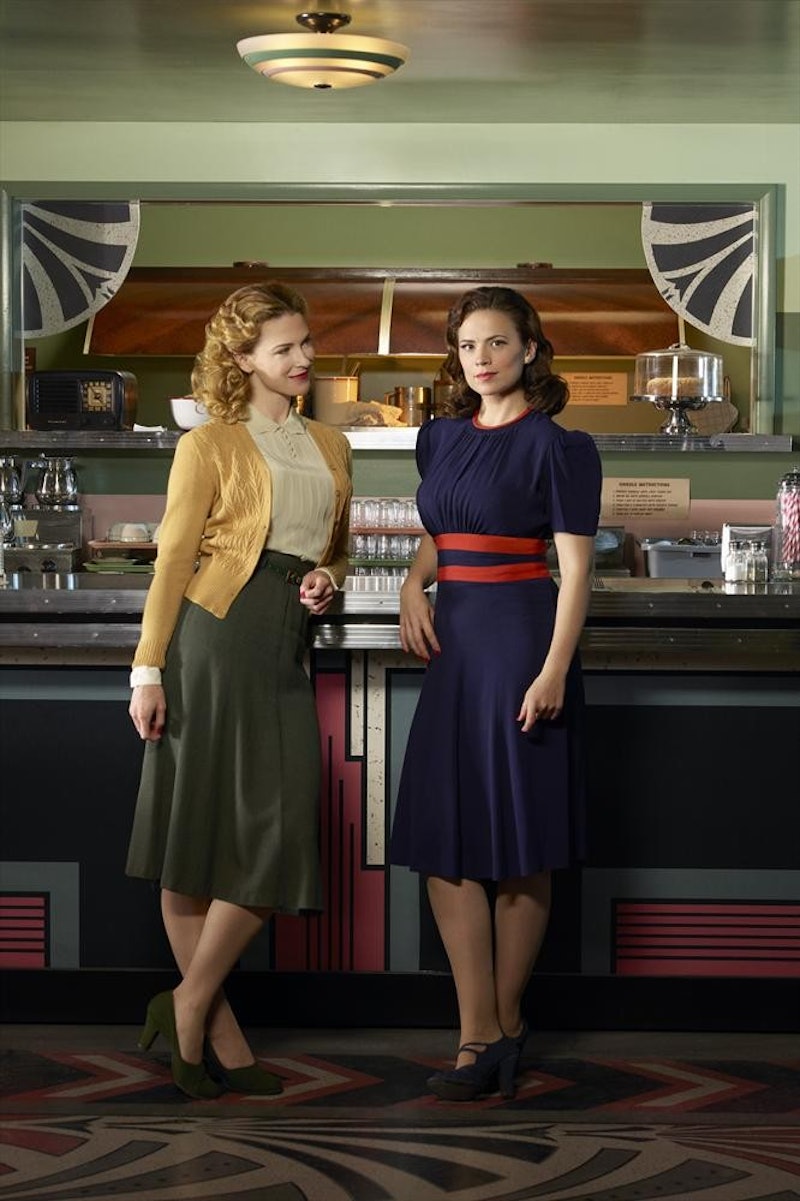 Has another Marvel character revealed herself on Agent Carter? Peggy's neighbor surprised us last week with some impressive fighting moves. Is Dottie Underwood a Black Widow on Agent Carter? If you caught that ballerina clue early on, kudos, because the answer is a resounding "almost," according to showrunners Tara Butters and Michele Fazekas' interview with IGN. It's too early in history to call her a Black Widow, but Dottie Underwood is a shadow of what is to come for Natasha Romanov. As Marvel fans know, Scarlett Johansson's character is not the only one who has gone by that title. Sure, she embraced the name separately in her S.H.I.E.L.D. Agent life, but Romanov started as one of several young girls in the Black Widow Program at the Red Room Academy in Russia. Some recent scenes from Avengers: Age of Ultron have suggested that more of this backstory will be explored in the films.

The promo for next week's episode of Agent Carter makes it even more certain that we're heading to the Red Room Academy and exploring this important piece of Marvel history. In the episode cleverly titled "The Iron Ceiling" (a play on "the iron curtain" and "the glass ceiling"), Agent Carter will reunite with Captain America's Howling Commandos on a mission to Russia where they will find the "Black Widow training grounds." In the clip, we see the pigtailed killers fighting each other, and then one taking out Dum Dum Dugan after living up to his name by saying she was "just a little girl." Check it out below.

Look at those "little girls" go! So, who is this sneaky assassin and why is she after Agent Carter? Leviathan, the big bad organization on this series, is almost certainly involved. One could speculate that Dottie Underwood is Yelena Belova, the second Black Widow, due to her blonde hair. That would mean that the two have swapped places in the canon. However, the showrunners have confirmed that this is not the case. It would be nice if Miss Underwood, if that is her real name, was one of Romanov's teachers or role models, but I don't think that is the case either.

Of course, this already has already taken a little time wiggling. Much of the Marvel Cinematic Universe has had to shift time periods from the original comics to keep the films in the modern world. Tony Stark was originally captured in Vietnam, not Afghanistan. Steve Rogers was a WWII Soldier, but woke up in the 1960s. Natasha Romanov, the Black Widow we are familiar with, also originated in the Second World War, and the Winter Solider was one of Natasha's "teachers" at the Red Room Academy. My yearning to see Sebastian Stan on my television set might be shining through, but does this mean we could see Bucky Barnes on Agent Carter yet?

It's sweet to see these earlier versions of the Avengers and Marvel Cinematic Universe relationships play out on Agent Carter. In last week's phenomenal fight between Howard Stark and Peggy Carter, we saw shades of Tony Stark and Steve Rogers' trying relationship. Not to mention Jarvis, though we see him more with Peggy than a Stark. Now, if this truly is Dottie Underwood's backstory, we have hints of Natasha Romanov and what she became to Steve in Captain America: The Winter Soldier as well.

Unfortunately, the promo clip also crushes my dreams that Peggy and Dottie are going to team up and take on the world together. Maybe they will later on down the road. For now, watch out! Russian spies really are all the rage lately, aren't they? Between this show, Allegiance, and The Americans, they are all over TV. In this additional clip for the episode, Dottie keeps up her wide-eyed act while stealing Peggy's keys.

We know that members of the Black Widow program have the potential to work for the good side. Let's just hope Dottie doesn't cause too much damage in the process. Maybe Peggy's honesty about how to best experience New York City will pay off. It was good tourism advice, but poor spy work, Peggy. What is Dottie going to find in Peggy's room? Steve Rogers' blood is in there, and not hidden all that well. Oh brother. I'm just saying, if I was training assassins, a vile of super soldier blood could go a long way...