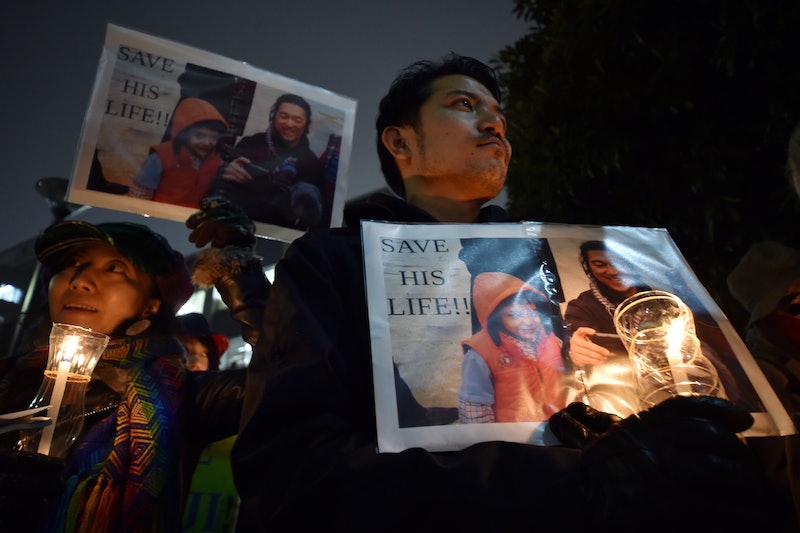 Days after video surfaced that allegedly showed the execution of journalist Kenji Goto, the world has been left with a sick feeling of fear and anger. Both President Barack Obama and Japanese Prime Minister Shinzo Abe condemned the act as heinous, and the loss of Goto and another hostage, Haruna Yukawa, has been devastating. It's clear that Goto was respected not only for his journalism, but also his humanity. BBC reports that Goto went to Syria to try to work for Yukawa's release, and Goto's mother, Junko Ishido, said he went to the country out of "kindness and courage." Now, a 2010 tweet from Goto urging love and tolerance has begun circulating on Twitter, as more evidence of his compassion.

The tweet, which as of Monday evening had nearly 24,000 retweets and almost 26,000 favorites, was posted on Sept. 7, 2010 and is now being used by members of the social media site to honor and remember Goto. The tweet is originally in Japanese, and the Associated Press reports its translation to English as:

Closing my eyes and holding still. It's the end if I get mad or scream. It's close to a prayer. Hate is not for humans. Judgment lies with God. That's what I learned from my Arabic brothers and sisters.

It's a particularly memorable statement, and one part truly stands out: "Hate is not for humans." Goto was known for writing about civilians who were suffering in war zones, and The Japan Times writes that he worked with UNICEF and the U.N. refugee agency. Toshi Maeda, a personal friend who confirmed the Twitter account was Goto's, told the newspaper:

Children, the poor and the needy, those are where he is coming from. He just wants to meet children in conflicted areas and tell the rest of the world their suffering. As he follows their stories, he ends up in war zones.

From his recent actions to his past words, it's clear Goto would want the world to remember kindness, even in times when you want to get mad or scream. It's increasingly difficult to do, especially when ISIS commits such hateful acts. But the popularity of Goto's tweet hopefully shows an understanding of how he would want to be remembered — for his courage, kindness, and compassion. "Hate is not for humans."