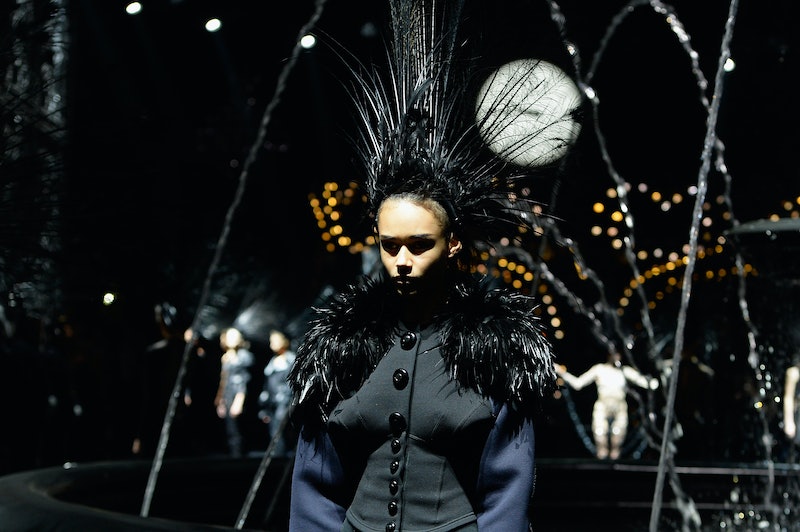 Though Marc Jacobs insisted that his final show for Louis Vuitton was an homage to the "showgirl in all of us," it was impossible to escape the funereal vibes that pervaded both the environment and the designs.

The set was littered with memories of Louis Vuitton shows gone by: the escalators from Spring 2013, the carousel from Jacobs' Spring 2012 show, the giant clock from Fall 2012, the vintage hotel elevators from Fall 2011, and the circular fountain from Fall 2010. This odd crowd of visual flashbacks both served as a reminder of Jacobs' limitless imagination and kept the set cohesive, as they all had one thing in common: Everything was painted black.

The show began with Edie Campbell in a nude bodysuit, graffitied with the Vuitton logo. Her exposed, embellished body fit with Jacobs' showgirl theme, but also with the show's omnipresent nostalgia; the bodysuit was covered in the graffiti-esque font designed by Stephen Sprouse that Jacobs splashed so memorably on Louis Vuitton bags back in 2001, simultaneously desecrating the revered logo and rejuvenating the LV brand.

The rest of the models — some of whom have walked past these very set pieces before, in brighter, airier LV shows — filed out around the noir debris, with giant black feather headdresses that were almost half as tall as they were. Showgirls, maybe, but somber ones. The collection was full of black lace, black embroidery, and swathes of sheer black fabric, with the clock in the background running backwards like a full yellow moon.

Marc Jacobs is known for his cheeky wit (graffiti fonts, neon rainbow colors, a custom gown for Miss Piggy), and his tendency to contradict the stuffiness of traditional Parisian haute couture is what made him such daring success at Louis Vuitton. He's just as exhibitionistic as his wildest models, and doesn't hesitate to strip down in front of the camera (remember the "Bang" perfume ads?). He's made his name as the big, irreverent, beautiful boy of fashion — but this was a grown-up show all the way, an elegant homage to his 16-year tenure at the revered house.

Not say that the show was overly conservative; there were bare breasts, graffitied tights, a sequined shirt that read "14" (for Spring 2014, presumably), and blue jeans decorated with everything from chains to tulle to feathers. But instead of attempting to turn the fashion world on its head, or to shock and frustrate, Marc Jacob's final display for Louis Vuitton appealed to one of the oldest fashion sensibilities in the world: Our sense of beauty.