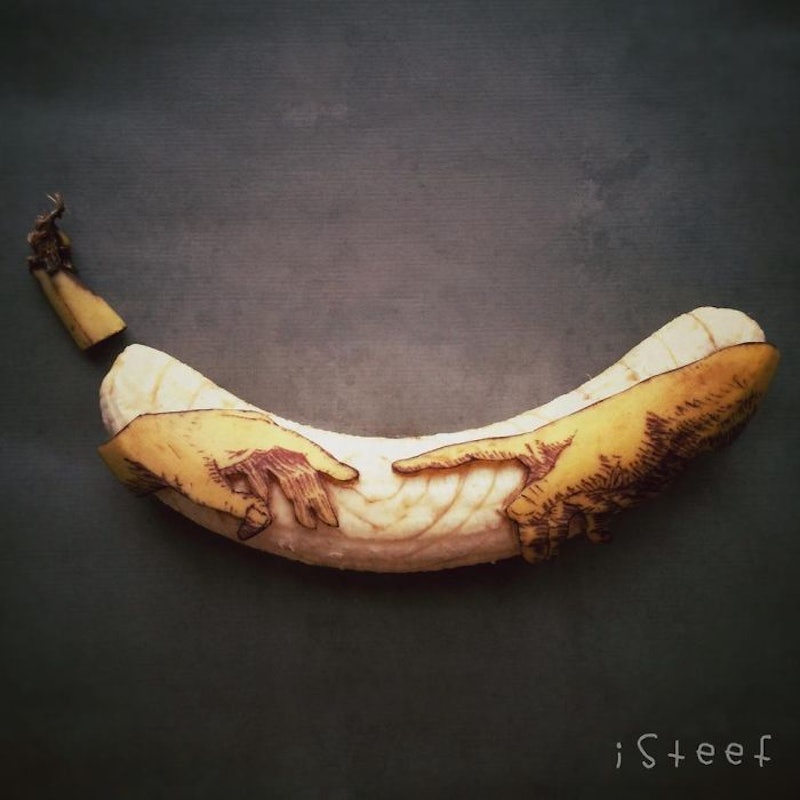 Let's all take a moment out of our busy lives and stare at a bunch of extremely impressive bananas, and no, that's not a euphemism (I wish). Proving once and for all that there is a lot of good that can come from fruit left uneaten, artist Stephan Brusche has been creating art out of bananas that defies pretty much anything about bananas you ever thought you knew. Armed with a peel, he can carve anything from Michelangelo replicas to The Beatles—the only real difference being that these versions of iconic scenes also happen to taste really good with a dab of peanut butter.

What is most impressive about the Netherlands-based artist's work is the nature of the canvas. Think about the last time you had a banana, guys. Those things rot like nobody's business. Full disclosure: I accidentally left a banana in my jacket pocket earlier today and in the half-hour long car ride it took to get where I was going, that thing was already brown as dirt. So you can imagine that carving a banana peel involves some extremely high stakes artistry in comparison to traditional mediums—especially when he is carving scenes this complex.

Brusche also works with other fruits, but there is something especially imaginative and quirky about the way he depicts bananas that makes this series so remarkable. It makes me feel kind of bad about how mindlessly I ate that banana today. It could have been the next Picasso if Brusche had gotten his hands on it first! Instead, it is presently being digested by a stomach that is barely recovered from Super Bowl weekend. (So I guess it's not a total waste. My stomach definitely needs some kind of non-chicken wing, non-beer sustenance at this point.) And to think, it could have looked like one of these masterpieces: