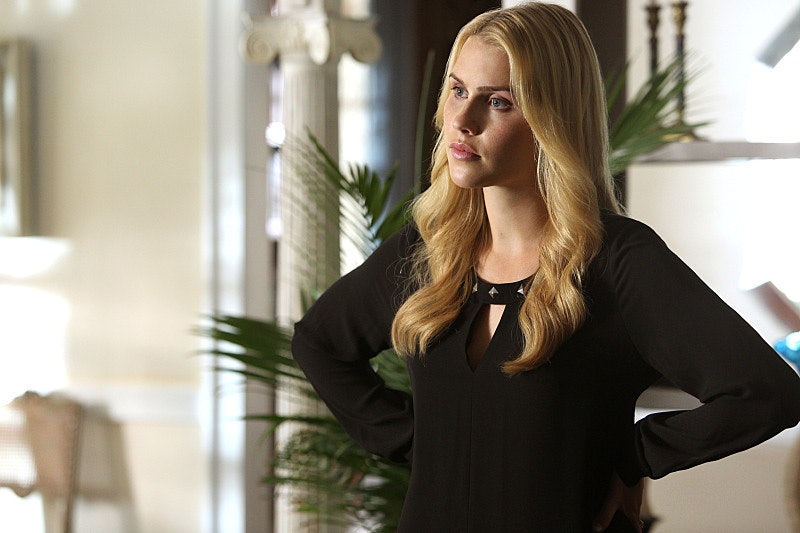 Girls will be girls, I suppose — and for the first time in Originals history, Rebekah Mikaelson isn't the only sister in New Orleans. On Monday, during The Originals' "Sanctuary," Freya Mikaelson revealed herself to Rebekah for real and bore a very chilling resemblance to their dear, old mother, Esther. Sure, last week Freya revealed herself via Scrabble letters, but during The Originals' new episode, she killed someone, broke Rebekah out of their witchy asylum, and vowed to whip their brothers into shape. Because what are sisters for than to keep their feuding, childish brothers in line, right? Well, as long as Rebekah doesn't get in her way.

The way Freya spoke about her impending reunion with the rest of her siblings didn't sound promising for Klaus, Finn, Elijah, and Kol (even if Kol is possibly going to die soon anyway). Apparently, much like Esther, Freya's awoken from a series slumber (100 years is a long time, people) and she's ready to whip the siblings that never knew her into serious shape with some serious magic that she undoubtably learned from her aunt. But how long can her alliance with Rebekah last?

Rebekah and Klaus seem to be in an extremely good place right now — at least, that's what the final moments of Monday's episode made it seem like. So, it's only a matter of time before A) she gets back into her old body (yay, more Claire Holt!) and B) she steps on Freya's toes while she's trying to reprimand her unseemly siblings. Rebekah's not going to let anything happen to Klaus — I mean, she essentially gave her life and body to protect him and Hope from Esther's evil planning, so I can't see her not stepping in when Freya eventually takes this reunion too far.

Is there room for only one Original sister in New Orleans? But, more importantly, will Freya finally take down Finn so we don't have to look at his creepy face any longer? Either way, it's kind of great that Rebekah isn't going to be the only Mikaelson sister onThe Originals— Esther might've been an evil witch, but her daughters are totally badass.

More like this
Vecna Officially Has A Fan In 'Stranger Things' Star Jamie Campbell Bower
By Alyssa Lapid
Yes, Joseph Quinn Is Actually Playing The Guitar In This Epic 'Stranger Things' Scene
By Alyssa Lapid
Jurnee Smollett’s Heart Is Healing
By Rebecca Carroll
Lizzo Proved She’s Team Jeremiah During Her ‘The Summer I Turned Pretty’ Review
By Grace Wehniainen
Get Even More From Bustle — Sign Up For The Newsletter