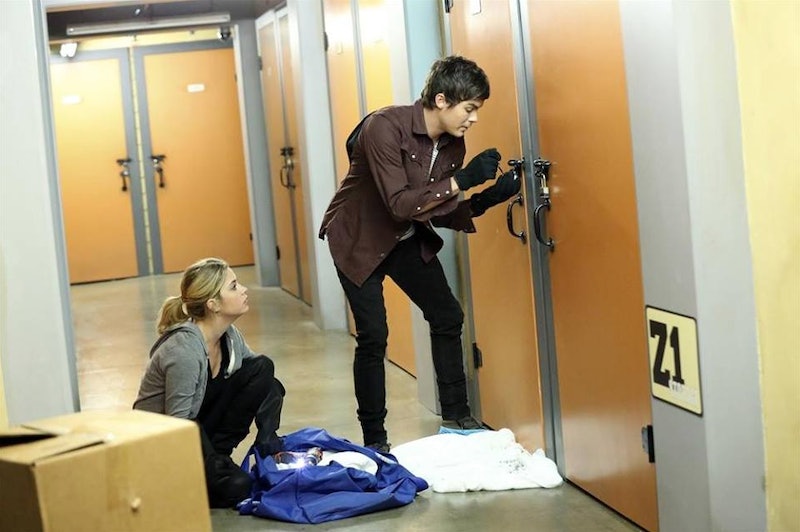 You can't stop thinking about it, right? No, I don't mean Hanna and Caleb going all Bonnie-and-Clyde-ride-or-die on us during last Tuesday's episode. (Even though, if we're being totally honest, I haven't stopped thinking about that either.) I'm talking about the question that's been haunting all of our waking hours AND nightmares: What's in the barrel on Pretty Little Liars ? Because any PLL fan that's stuck by the series' through its past five seasons knows that Mona's body isn't in the barrel. That'd just be way too easy. But what if the barrel holds the answer to another one of PLL's long-standing mysteries? Tumblr users have some PLL barrel theories that are crazy enough that they might just be true.

Obviously we all want answers and we all want to know what exactly happened to Mona's body — or to at least know whether or not the former A-team member pulled an Allison and she's really alive out there somewhere. But, at this point, we're all smart enough Pretty Little Liarsfans (with a good understanding of I. Marlene King's imagination) to know that there's no way Mona is in that barrel. So, we're left to meditate on some of the craziest theories on the Internet because no one is ever safe on PLL— I mean, look what happened to Mona, after all. If I. Marlene King could kill her off when she was on A's tail, it could be anyone in that barrel. Including one of these four people.

Theory: Melissa Hastings' Body Is In The Barrel

It's been a long time since we've seen Melissa Hastings, as Tumblr user prettylittleplltheory pointed out. And I have to agree that Toby's been acting like he knows something seriously disturbing these days. Of course, it's entirely possible that he's just being spiteful because Spencer lied to him about going looking for the bloody knife with Caleb, but it'd be something else entirely for him to know and have to hide that Melissa's body is in that barrel. And it wouldn't be the first time PLL went there.

Theory: Eddie Lamb's Body Is In The Barrel

Sure, Eddie Lamb played a big part on PLLwhen Radley was a hotspot for clues and, as Tumblr user chemicalxwings states, Eddie was "silenced" and never heard from again. But that doesn't necessarily mean that he's dead — OK, fine, if he had anything to do with 'A' and the secrets surrounding Radley, he's probably dead. It'd be a twist for Eddie's body to be in the barrel, but it wouldn't take us anywhere new with the current mysteries on PLL.

Theory: Paige's Body Is In The Barrel

I'll admit that there's really not much to gain from Paige being found in the barrel. Tumblr user plladdiction1 points out that Paige has been MIA since she ditched Rosewood for California and, I mean, she's been avoiding all of Emily's attempts at contact. So, there might be some merit to this theory, but why would anyone — 'A' included — bother killing Paige?

Theory: Sara Harvey Is In The Barrel

Likelihood: OFF THE CHARTS A-STATUS, Bitches

Lots of Tumblr users seem confident that Sara Harvey, that other girl that was murdered around the same time that Allison went missing is in the barrel. Sure, it's extremely disturbing to think that this girl's body has been stuffed in that barrel for all of this time, but this recent Twitter exchange between King and a fan makes it seem more than likely that the body in that barrel is Sara. I mean, it'd for sure bring the closure that King promised.