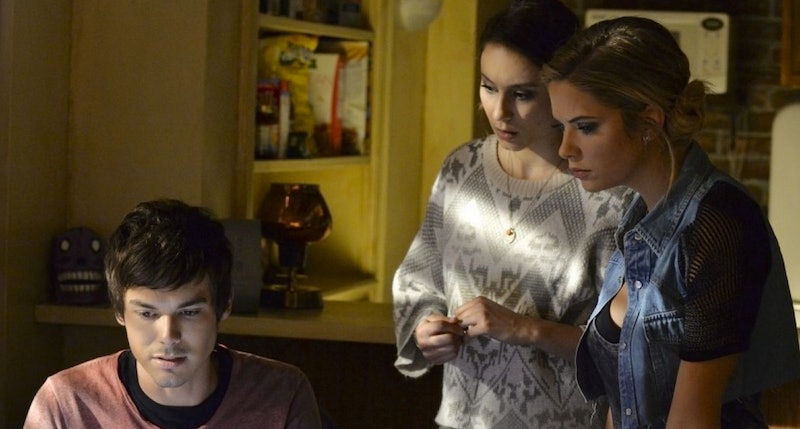 Well, nobody ever said loving Pretty Little Liars would be easy or uncomplicated. Last time we checked in with the gang from Rosewood, Hanna and Caleb were trying to stage a coup against the rest of the liars, breaking into A’s (or so we think) storage room. What’s in that storage room? Just the normal A-type stuff, like plastic sheeting (A must own stock in plastic sheeting, because he/she always has so much of it), a barrel presumably with Mona's dead body in it, and other nefarious objects. But what if something else in is Pretty Little Liars ' all-important barrel?

Let's recap: All of the other liars were content on erasing any harming data on Mona’s now-awake laptop and then dropping it off to the police and letting them do their thing (because trusting the police has always worked out so well in the past for them), but Hanna had to break free, guilting Caleb into her plan in the process. The one thing Hanna didn’t count on was Tanner and Toby (who I will never, ever take seriously as a cop. Ever.) popping in on her and Caleb breaking into the storage unit. Now Hanna is in even deeper doo-doo than we thought, especially because it seems obvious Mona's decaying body was being housed in that same storage unit.

Of course, mean old schoolmarm Detective Tanner took a peek inside said barrel and was…not pleased with what she saw, to say the least. There is definitely something smelly and rotting inside, but is it Mona’s body? Let’s get down to the bottom of this together. Here are some possible theories I've come up with, mostly over long and sleepless nights:

The stink in that barrel and the look on Tanner’s face lean toward decaying organic material (aka human flesh) being in that barrel, but Mona is certainly not the only person who has been killed in Rosewood in the last five seasons. Remember how we all thought Wilden’s body was in the trunk of the car? Even though we have actually seen Mona's body in the back of a car trunk, this isn’t the first time that I. Marlene King has thrown a red herring into the mix. Maybe it’s a piece of Bethany Young in that barrel. Perhaps a piece of Wilden is in the mix. I mean, it could even be half of a cow.

A has connections — remember when he gave Hanna her very own tooth cleaning? There is still a possibility that Mona is walking somewhere around Ravenswood, contemplating why ABC Family ever greenlit that into a show. In Rosewood, the most obvious answer is sometimes the least plausible.

Detectives Tanner and Holbrook definitely have that whole good cop/bad cop thing down. If they both think that the liars have had something to do with all of these Rosewood murders, why wouldn’t they brainstorm means of entrapment? Holbrook has allegedly been out of the picture because he “visiting his sick father,” but since Hanna found this to be very untrue, Holbrook could have totally left Rosewood to dig up more dirt on Ali, Emily, Spencer, Hanna, and Aria. Ali’s travels in the first few seasons alone were mind-boggling. Holbrook and Tanner could have easily split up to cover more ground together: This barrel situation is literally like shooting fish in one, since they knew about it all along and just needed a place to attract any guilty liars.

…Unless Holbrook Is Actually Helping Ali Instead

Remember what I said about Holbrook being in on this with Tanner? What if he was really helping to exonerate Ali for Mona’s murder? When Hanna went to see Holbrook at his father’s house (where he wasn’t there), Holbrook’s daddio thought that Hanna was Ali and asked her a few Ali-centric questions. Holbrook and Ali were also seen canoodling at the dance in the Christmas episode. Ali certainly has a penchant for older men (see: Ian, Ezra, all of her brother’s friends, etc.), so what’s seducing one more? Holbrook, missing in action now for a while, could have planted all of this to attract the liars and get Ali off the hook and out of an orange jumpsuit.

Officer Toby Is In On This Whole Thing

Sorry, Spoby fans: This one’s gonna sting. I know that Toby is like, the best boyfriend and now he wears a uniform so Keegan Allen is hotter than ever, blah blah blah, but did anyone ever stop to think that Toby never left the A-team? This could be the long con of long cons, blowing up his own house (he didn’t get hurt, remember?), killing Mona, and attending and graduating from the police academy to further hurt the liars. Who else knows more about all of the pending investigations against the lying ladies than the cops (and maybe their lawyers… if they have lawyers that aren’t their moms)? I superficially love me some Toby, but he would be a whole hell of a lot more interesting if he was actually evil. Toby following around Detective Tanner keeps him far enough ahead of everyone else so he can report back to A.

Where this all stops nobody knows, but I, for one, have never been so excited for the contents of an industrial-grade oil barrel to be revealed.