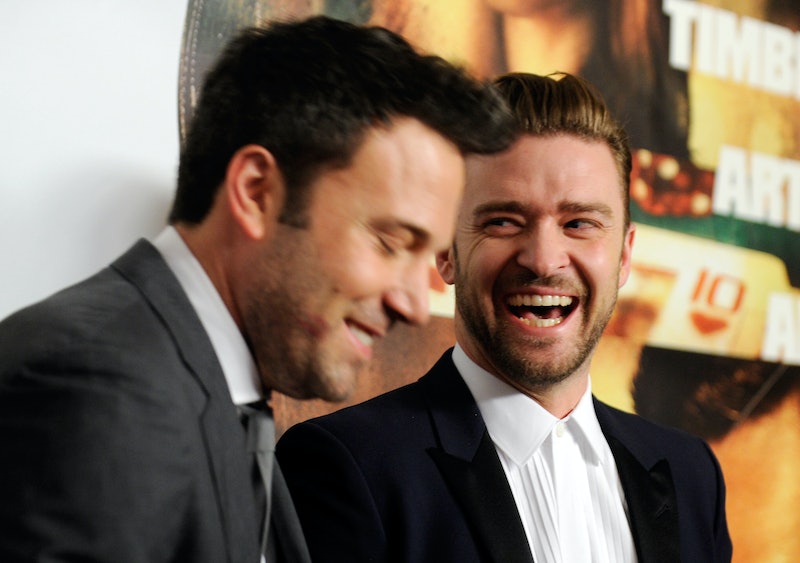 If you haven't heard much about Ben Affleck and Justin Timberlake's new movie Runner, Runner, it's probably because they haven't told you anything about it. Their film hits theaters on Friday, Oct. 4, but there's no way you could've known that because, hell, no one told you. Runner, Runner has gotten so little press that it's become pretty obvious that the studio just wants to bury this film and pretend it never happened.

And critics feel similarly. With only 21 percent on Rotten Tomatoes, no one seems to like this gambling movie, regardless of the fact that it stars two of Hollywood's hottest men at the moment — if the plot sucks, the plot sucks. No one's having it.

For the record, Runner, Runner is "based on the true event" of a Princeton student traveling to the islands to find the man behind the online poker website that took all of his tuition money. Thinking the site is corrupt, Timberlake (the student), seeks to confront the site's CEO, Affleck, but surprise, they end up joining forces and double surprise! Things go wrong.

I called in a few favors and was lucky enough to sit down with Timberlake and Affleck for what is believed to be the only press they agreed to do for this crap bag of a movie. Let's dive right in.

Justin, you play college-kid-turned-gambling-lord-turned-FBI-snitch Richie Furst in the film. Can you describe a little bit about your character?

That was deep man, thanks. What about you, Affleck? As gambling lord Ivan Block, did you draw inspiration from say, your Rounders character, or your real-life recovery from a gambling addiction?

I'll take that as a "definitely." Justin, why sign up for this movie when you've done so many better things? Your album the 20/20 Experience is amazing, and everyone loved you at the VMAs. You just seem too good for this right now.

Same goes for you, Affleck. Helloooo, you won an Oscar for Argo, remember? What was it about Runner, Runn —

Whoa. You're time for what? An Oscar for acting? I don't know, bro, but Runner, Runner isn't going to get you there. Now, Justin. What were your thoughts when you first heard about the project?

Okay, so why'd you do it then?

I know what that grin means: money.

No "buts" about it, Hoss. You agreed to this because you just wanted to pad the bank account with even more hundos.

That's pretty materialistic. Ben, what about you?

Oh my god, dude. You need to relax. I'm just a blogger trying to get to the bottom of this Runner, Runner thing.

Sure has, brosef, which is why we want to hear straight from you, the source, about your movie. What's your beef with bloggers talking about the film, anyway?

Yeah, and? Isn't that kind of the point? Timberlake, help a sister out here. You guys are so hard to talk to.

Wait, when was that ever on the table? I mean, I wasn't, but now I am. This interview is degenerating fast. Interviewing you is like trying to interview Lil Bub.

Wow. You're even more sensitive than I imagined. I've had it with you two. Justin, before I leave, is there anything you'd like Ben Affleck to fake say when you put your hand over his mouth make it look like he's speaking?

That makes one of us.