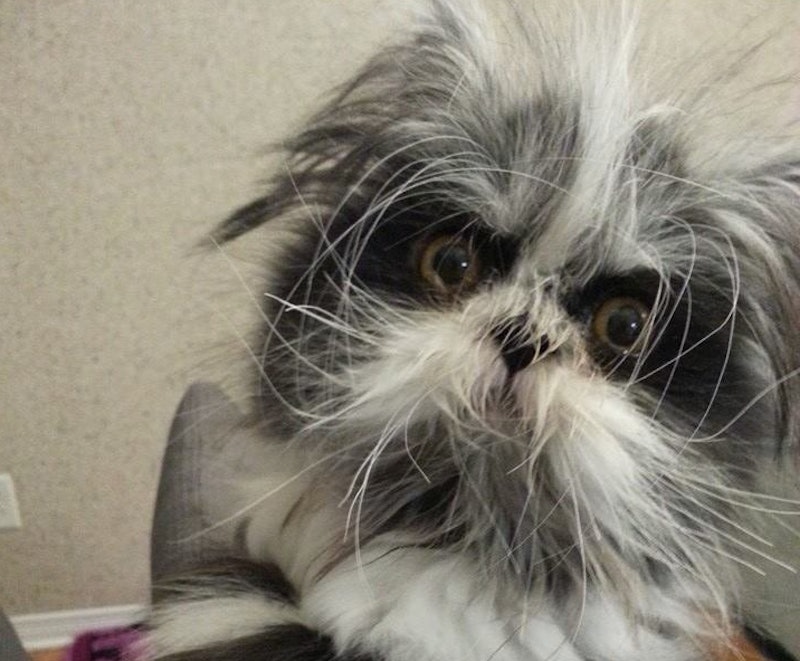 Back in my Tamagotchi days, I remember a pair of sisters at my school whose parents had made the mistake of saying that they could have a pet without specifying what kind of pet. Naturally, one of them wanted a cat and the other wanted a dog, and it took less than five minutes before every 4th grader in our school was screaming their heads off in defense of one or the other. Little did they know, all their problems could have been solved by this cat dog hybrid named Atchoum. Is Atchoum a cat? Is Atchoum a dog?! The world will never know.

Just kidding, we actually do know: Atchoum is entirely a cat. He has a condition called hypotrichosis, which causes abnormal hair growth all over his body. He is basically the Hugh Jackman of cats. And when he isn't prancing around confusing people and getting the Cat-Dog theme song stuck in their heads, he is living an adorably furry life in France, where he has amassed a cult of followers (and who can blame them?) Praise the barely passable French I can recall from high school because I can understand just enough of this video to know that Atchoum enjoys playing with iPads, going on covert missions, playing with the refrigerator and going in the bath.

It will probably be at least a few more years before science actually achieves a cat/dog hybrid and those girls from my youth can finally end their pet war, but until then we have Atchoum, who is way more adorable than anything I can imagine science engineering. BEHOLD HIM IN HIS CAT DOG GLORY.

Here he is as a little kitty-puppy:

And here he is as his poofy cat-sized self:

That's a cat daring the internet to make a meme out of him if I've ever seen one.