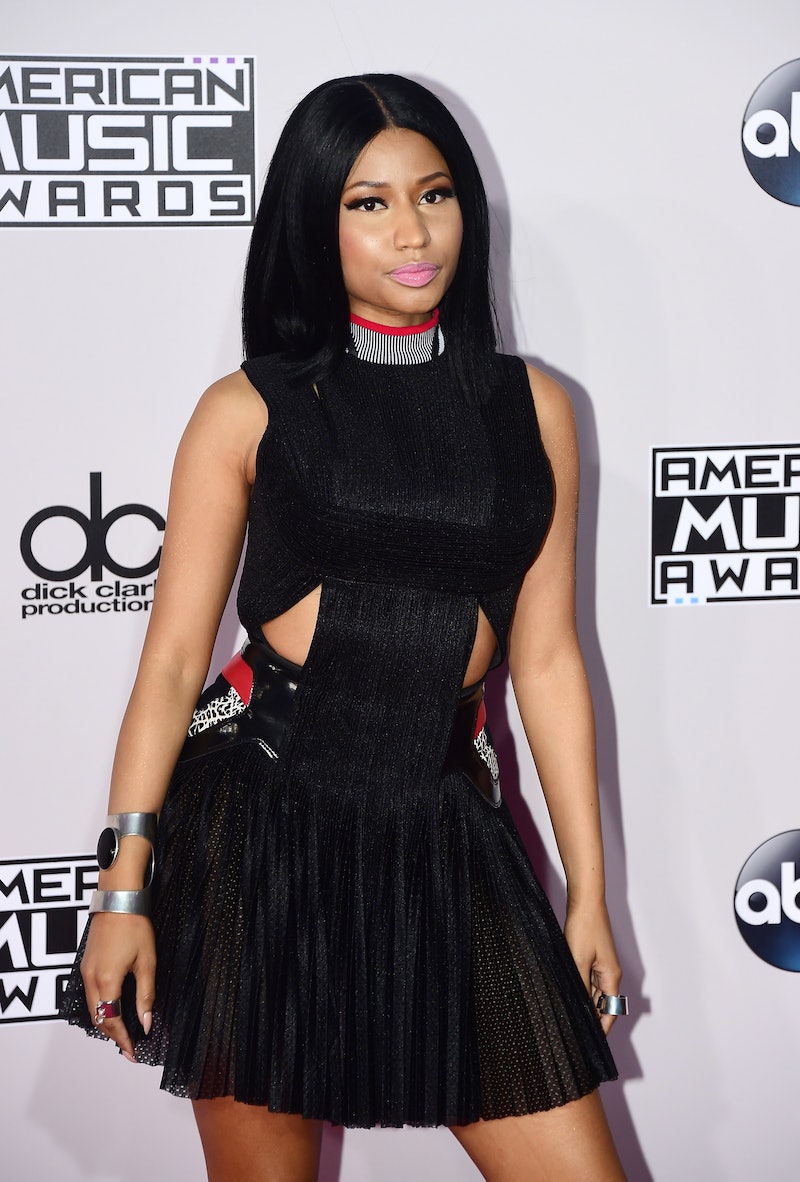 After months of speculation, it definitely seems that Nicki Minaj has found herself a new man! It seems her newest beau — and her first since splitting with Safaree Samuels, a relationship that lasted longer than a decade — is rapper Meek Mill, the guy she's been seen out and about with more and more frequently in the past few months. Until now, Minaj has denied that there's anything between them, but it seems as though she's just been covering up what's really been going on behind the scenes. And although neither party has made an official statement just yet, her latest Instagram post insinuates that Nicki Minaj and Meek Mill are officially together — and they're kind of adorable.

In the photo she posted on Feb. 2, Minaj is smiling bashfully at the camera in jeans and a huge furry blue coat as Mill, standing behind her, leans in to give her a kiss on the cheek. Unfortunately, the pic is caption-less, but I'm pretty sure it speaks for itself. If these two are just friends, they certainly aren't acting like it, and I can't help but feel like this picture was meant to be a wordless announcement that they actually are dating. Plus, how happy do these crazy kids look?

This isn't the first time Mill has made an appearance on Minaj's Instagram, but it's definitely the coziest they've ever looked. About a month ago, Minaj posted the photo below from when they were filming a music video together, and Minaj also appeared in Mill's "I B on Dat" video from last year, proving they've been close for quite awhile.

Now that we know they're (probably) officially dating, it's time to figure out where this couple originated. Since their relationship is so new, neither of them have spoken publicly about their budding love story, but it's easy to trace back. It definitely appears that Minaj and Mill met in the studio, when he collaborated on two of her songs for her latest album, The Pinkprint: "Buy a Heart" and "Big Daddy."

Obviously, they know how to collaborate — a skill that is required of any relationship — but "Buy a Heart" almost confirms that they're together, especially if you take the lyrics to have a deeper meaning. Minaj sings about wanting to avoid "rumors of the two of us," and Mill compares the relationship in the song to the one between Beyoncé and Jay Z. Um, yeah. There is definitely something going on here.

Being a fan of each other is absolutely essential in any relationship, and it sounds like the friendship they formed before they started dating is definitely giving Minaj and Mill a solid foundation for their romance. Congratulations, you two!