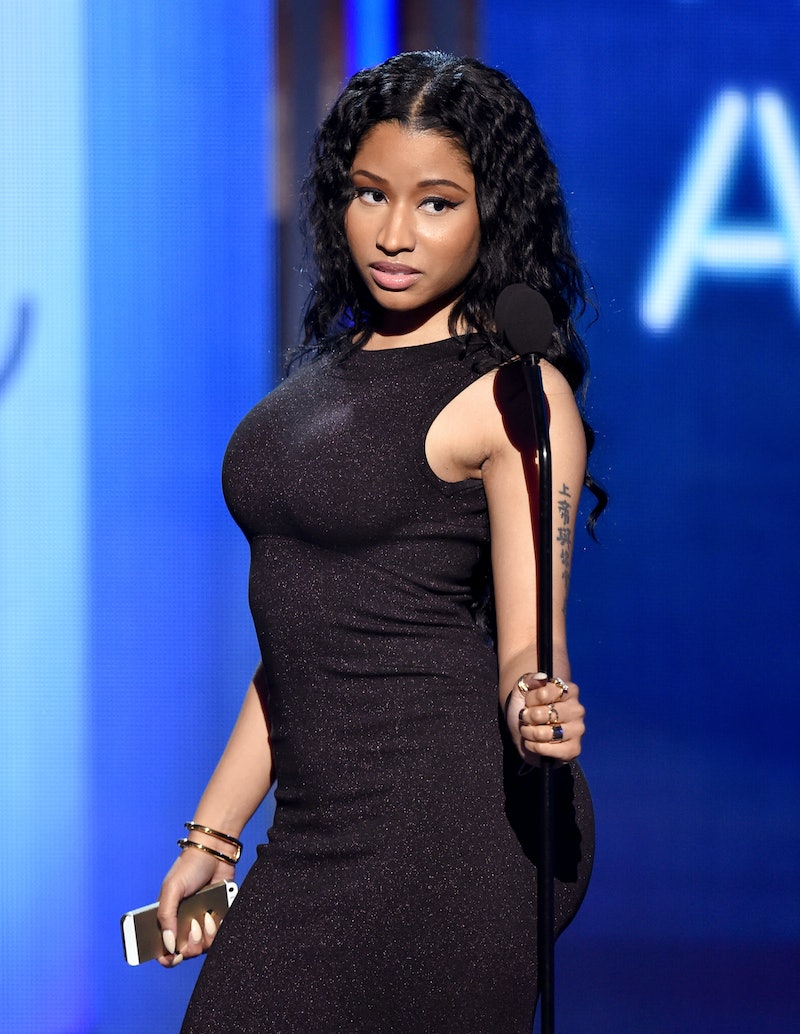 Nicki Minaj, rapper and world renowned anaconda tamer, is not the kind of person whose bad side you want to be on. As a successful female rising through a male-dominated profession, Nicki has always been the walking definition of confidence and intimidation, even in her most vulnerable moments. (Have you listened to "Pills 'N Potions?" It's like a whole new Nicki!) Throughout her stardom, the 31-year-old has had her loyal hype man/assistant/best friend/boyfriend/fiancé/whatever Safaree Samuels by her side, who even served as the co-executive producer and A&R coordinator for her smash album Pink Friday: Roman Reloaded. Unfortunately for fans of the couple, reportedly Nicki Minaj and Safaree Samuels may have broken up after an over-a-decade long relationship.

Dating someone as high-profile as Nicki can't be easy, but Safaree frequently tweeted about how grateful he was to have his life "revolve around" hers. Apparently that's no longer true, however, since TMZ broke the news that Safaree had grown "uncontrollably jealous of her success... success he wanted for himself," and didn't bother showing up at one of her performances, which left her "scrambling for a hype man." That's obviously something Her Minajesty was not prepared to tolerate, and she supposedly broke off the relationship.

On top of the jealousy rumors, Safaree has been seen out and about with a new set of tattoos that cover up the ones he previously had in honor of Nicki.

As you can see in the picture above, the image on the right shows a portrait of Nicki and her name written across his chest, but in the more recent image on the left, both have been extensively covered up by new ink. This isn't the first time news of a split has circled the couple, and even after they've fought in the past they've managed to reconcile. Either way, this kind of celebrity break-up never fails to amaze me (aka the classic tale of girl meets boy, girl and boy fall in love, girl becomes super famous, guy thinks he can handle it, guy runs away screaming). I mean, she's NICKI EFFIN' MINAJ. Obviously being her other half is going to come with certain pitfalls, one of which is that you will never outshine her. Unless Safaree's aspiring music career suddenly blows up to Drake-sized proportions, Nicki will always be numero uno in terms of success.

It's definitely sad to hear, especially knowing how long they've been together (an alleged 14 years!!!!!) and seeing how much he's supported her all this time. Not to mention, Nicki had just told L'Uomo Vogue how she wanted to start a family after seeing the way her "Flawless (Remix)" collaborator Beyoncé balances it all:

Seeing Beyonce with her daughter and husband was so tender, and it showed me that it is possible to be an animal on stage and a caring mother at the same time.

Aw! Although it's clear no one messes with Nicki Minaj and gets away with it (lest you get a nasty song written about you, *cough*Lil Kim*cough*), but maybe this is just a bump in the road for the couple. They've been together for so long, there's bound to be ups and downs. The tattoo situation definitely looks dubious, though some are claiming the reason Safaree covered up his tattoos was because Nicki specifically asked him to out of a respect for her privacy. Hopefully they'll patch this one up!