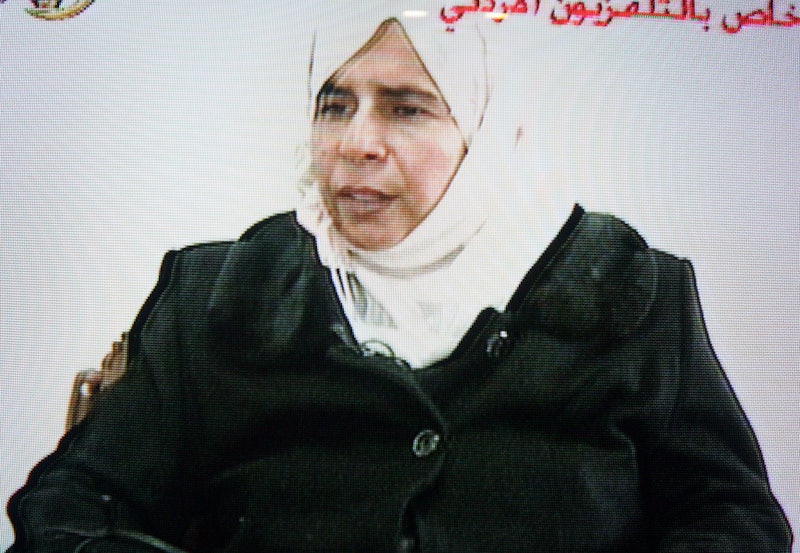 On Wednesday, the government of Jordan executed two prisoners, Ziad al-Karbouli and Sajida al-Rishawi, the female Iraqi suicide bomber ISIS wanted released in a hostage saga that has lasted weeks. Their deaths are retaliation for the brutal murder of Jordanian pilot Moaz al-Kasasbeh on Tuesday. Al-Rishawi represented a legacy of terrorism for ISIS, and had she been released, she could have been used to recruit more women to the militant group.

The executions of al-Karbouli and al-Rishawi also spark renewed concern over the fate of a young female American aid worker who was captured by the terrorists last summer. Although ISIS hasn't publicly murdered a female hostage before, Max Abrahms, a professor of political science at Northeastern University and an expert on terrorist group behavior, believes ISIS will kill the American hostage, because they haven’t shown mercy for women in regards to their violence in the Middle East.

“ISIS does not care that she is a woman,” says Abrahms, despite the laws of Islam that forbid violence against women, even in war. “ISIS kills and rapes hundreds of women. The gloves have come off now. ISIS and Jordan are at war.”

Following the release of the video of the pilot's death, a spokesman for the Jordanian armed forces promised "punishment and revenge" in retaliation for al-Kasasbeh's murder. Al-Kasasbeh hails from a politically influential tribe in Jordan that is supportive of the king, and he is the first member of the coalition attacking the Islamic State to be captured.

This specific nightmare began on Jan. 20, when the Islamic State — also known as ISIS or ISIL — announced it wanted $200 million from the Japanese government in return for two citizens, Kenji Goto and Haruna Yukawa. The Japanese government did not pay the ransom. After executing Yukawa on Jan. 24, ISIS canceled the previous ransom and demanded al-Rishawi be released. Jordan, in response, said they wanted al-Kasasbeh in return for their prisoner, contingent on proof that the pilot was alive. After ISIS failed to provide proof of life, the deadline for the swap passed on Jan. 28, and the terrorists killed Goto.

The American hostage — whose name is not being released at the request of her family — is one of the people held in the same prison James Foley, a journalist and the first American to be killed by ISIS, was held. The group has not beheaded a female hostage yet, but terrorism experts believe al-Rishawi’s execution could lead to that retaliation.

Mia Bloom, a professor at the Center for Terrorism and Security Studies at the University of Massachusetts, Lowell, told Bustle she was concerned ISIS will use the execution of al-Rishawi as justification to kill their female hostages.

Why Was Al-Rishawi A Vital Figure For ISIS?

If Sajida al-Rishawi had been released, terrorism experts believe she could have posed a threat to the Islamic State. Al-Rishawi embodies the female fighter, and ISIS currently forbids women from participating in combat situations. “She may be the source of great fanfare and propaganda,” Bloom says. “Women may start looking to her to be like her."

Al-Rishawi was jailed in 2005 after she and three others wore suicide vests into a Radisson hotel in Amman and killed more than 57 people. However, her vest did not detonate. After fleeing the scene, she was brought into custody and put on death row.

If al-Rishawi had been released, she would have represented a woman who embarked on a combat mission — something ISIS currently forbids, according to a recent study on the life of some women who have joined the Islamic State. Becoming Mulan: Female Western Migrants to ISIS , published by the Institute for Strategic Dialogue in January, details the journey and lifestyles of women who join the terrorist group, particularly from Western countries, through content posted on the women’s social media accounts.

Al-Rishawi told interrogators that her actions were motivated by vengeance. Before the bombing, she was married to Abu Anas al-Urdoni, a Jordanian member of al Qaeda who died fighting the Americans in Fallujah in 2003 or 2004. Not long afterwards, her three brothers were also killed by U.S. military in Iraq. Her eldest brother’s death, according to The New York Times, was the tipping point — he had become a close aide to Abu Musab al-Zarqawi, a Jordanian who led al Qaeda in Iraq. In early 2005, she volunteered for a vengeance mission and was recruited for the planned attacks in Amman.

“[ISIS' demand] has nothing to do with the fact that she is a woman,” Abrahms says. “It would be a big success in the jihadist circle, specifically among those sympathetic to al Qaeda in Iraq.”

Al-Rishawi’s release wouldn't just have affected the women of ISIS. By demanding that Jordan release a female prisoner, Bloom suspects the group could have been trying to spark motivation from the male members of the Islamic State.

“It speaks to men when they feel like their women are being mistreated,” Bloom says. "They are also made to feel unmanly; they don’t want it look like they are hiding behind women, or letting them fight for them.”