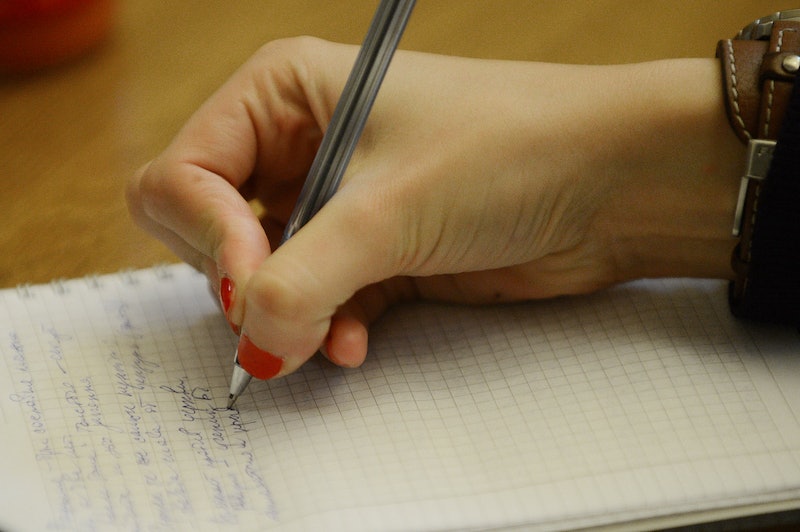 Watch out, Sylvia Plath. Nine-year-old Gabi from Los Angeles has written the darkest poem ever to rival all dark poems and the Creativity Corner section of the Los Angeles Times decided to publish it.

It all started with a poem called "Seashells" by nine-year-old Christopher from Lemay Elementary. He wrote: “Seashells are shining. Seashells are like ocean waves. Seashells beam at night.” Totally standard, right? Something I would definitely write as a third grader and probably think I created a serious masterpiece. The second poem in the creativity corner shared the pleasant sentiment of "Seashells" and was called "Parakeets," by eight-year-old Skylar, also from Lemay Elementary who wrote, "Parakeets are loud. On Friday, I take them out. They are so pretty." Again, pretty standard (though undoubtedly less poetic than Christopher's, sorry Skylar), and totally expected from a young student in elementary school.

The third poem, however, threw everyone for a loop. Gabi from Pegasus School wrote a poem called "Red As Blood" which goes like this:

The fire is red as blood.

I watch the flames go up in the air as I taste the sadness of the people whose houses have burnt to the ground.

I turn back, but all I hear is the bursting and explosion of flames.

As comedian Shelby Fero pointed out, that escalated quickly.

I'm not entirely certain whether or not the poem is cause for alarm, or the sign of a young poetic genius. It's probably a little bit of both, for all truly great artists are a little bit disturbed. Even if they are nine years old.