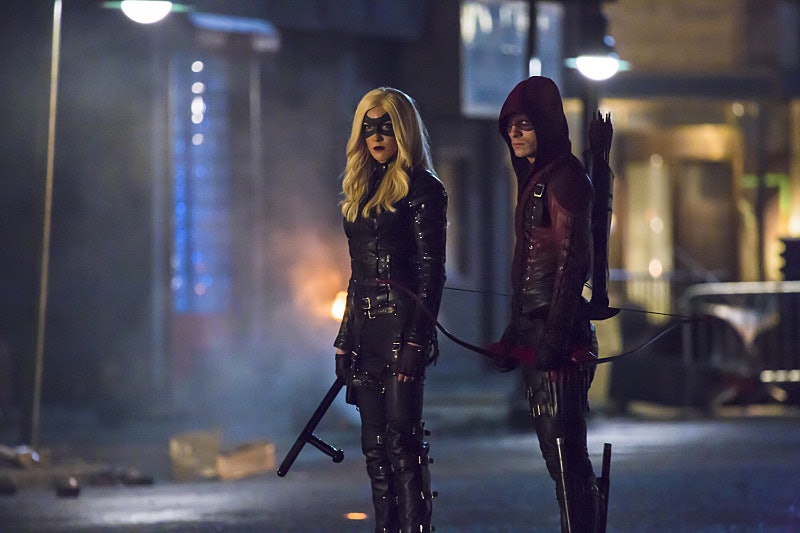 Arrow may be known for its non-stop action and epic cliffhangers, but that doesn't mean there still isn't time for one or two romantic entanglements… and for once I'm not referring to Oliver and Felicity. No, the relationship that has been brought to the forefront of my mind these days centers around Team Arrow's newest recruits, Laurel Lance and Roy Harper (aka Canary 2.0 and Arsenal). With Oliver currently out of the picture (for now at least), Laurel and Roy have needed to lean on each other for support more than ever before, which has created a surprising amount of chemistry between these two very different characters. But could Laurel and Roy eventually hook up on Arrow? At this point, I'd say pretty much anything is possible.

Nothing has happened yet, of course. I mean, what fun would that be without a slow burn, right? But that doesn't mean it won't sometime in the not-too-distant future. Laurel and Oliver sizzled out a long time ago and with Tommy (RIP) no longer around, this Canary has been flying solo for quite a while now. Not that she needs a relationship. (Her badass independence has been proven more than once this season already.) But it would be nice to see a little romance amid all the crime-fighting.

As for Roy, well, the poor guy could use some lovin' these days. Not to mention that it could create quite the tense dynamic between Laurel and Thea. (You know, as if those two needed yet another reason to potentially butt heads, what with Thea being Sara's killer and all.) These two ladies are bound for an inevitable showdown, so throwing Roy's affections into the mix would add even more fuel to that ever-growing fire.

I gotta say, I've never been a huge fan of Laurel's even from Day 1, but I surprisingly don't hate the idea of this particular vigilante hookup. Now that's not to say that they'd necessarily become as beloved as Olicity or anything (that's an almost impossible feat), but a steamy tryst in-between combat sessions could make for a nice little side story. And it seems like many fans are totally open to the idea.

Granted, this doesn't guarantee that anything will come out of this other than a strong friendship. In fact, at this point, I doubt they even view each other in that way. But when you start saving each other's lives on a daily basis, a special bond is bound to develop. They'll grow to trust and rely on one another, and before you know it, the network suddenly has a brand new 'shipping pair on its hands. (Canarsenal? Lauroy? Arsenary? OK, the name needs work.)

So be on the lookout, folks. Because something tells me these Arrow stars may very soon be struck by Cupid's bow. Laurel does have a thing for guys in hoods, after all. Just saying…