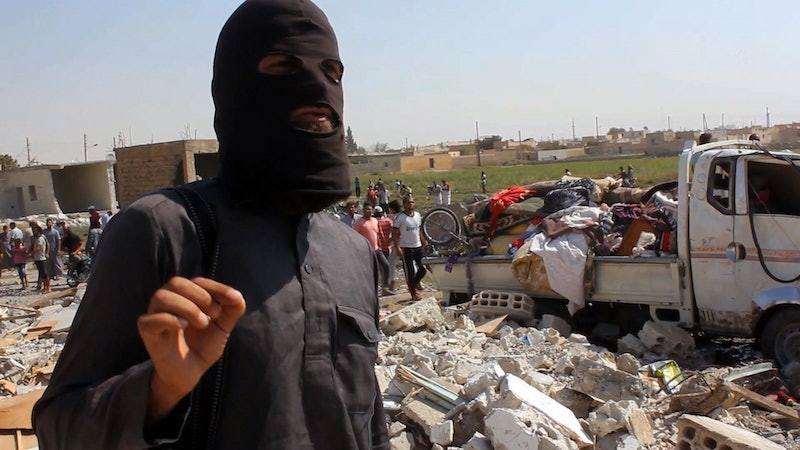 By now, you'll heard the news about ISIS' latest video release. On Tuesday, footage was posted to the internet appearing to show a man, reportedly captured Jordanian pilot Lt. Moaz al-Kasasbeh, being burnt alive in a cage. It's horrifying, to put it lightly, just like all ISIS' gruesome images of execution — basically, par for the course for the Islamic militant group at this point, a sort of terrifying calling-card. So, please, don't watch ISIS' burning-alive video, because beyond being gruesome, it's exactly what the group wants you to do.

To be clear, that's not to say the story should be glossed over or ignored. Is it newsworthy? Absolutely. Any time a captive is executed for show by one of the world's most infamous terrorist groups, complete with threats against more captives, and broadsides against their governments, you're talking about events that could spur high-stakes international incidents. As such, it's hugely important that the public be well-informed.

But when it comes to actually consuming the content? Sitting down and watching a man be burnt to death, or beheaded, or killed in any number of heinous ways? That's not worth anything at this point. It's just what ISIS does, has done, and seems bound to continue doing. In short, watching somebody be killed doesn't tell us anything new about ISIS; it only confirms what we've known for months.

To recap, ISIS has put out a slew of these sorts of inflaming, awful videos over the past many months, showing the deaths of people from different countries and walks of life. The other execution-video victims so far:

Those are just the individual people whose deaths ISIS wanted out for public consumption. In reality, they've beheaded countless more people across Iraq and Syria, not just specific hostages whose executions they seem to feel they can benefit from broadcasting to the world.

There's nothing to be seen in these videos but horror for horror's sake. So if you're reasonably convinced already as to the militant group's awfulness and capacity for violence — the worst of which, it always bears mentioning, is wrought on predominantly Muslim and Christian populations native to their controlled-areas — maybe it's time to start tuning these things out. Not the stories, mind you, just the videos, the images, the still shots of captives staring into cameras, knowing their lives are about to end.

Obviously, you might disagree. But the first thing I thought when I read about this story, in all honesty, was whether the macabre fixation on the way ISIS kills, rather than the simple fact that they do, serves any worthwhile purpose anymore. It's pretty tough to see what's gained by giving these kinds of awful things any more eyeball time, especially while that's obviously exactly what they're longing for.