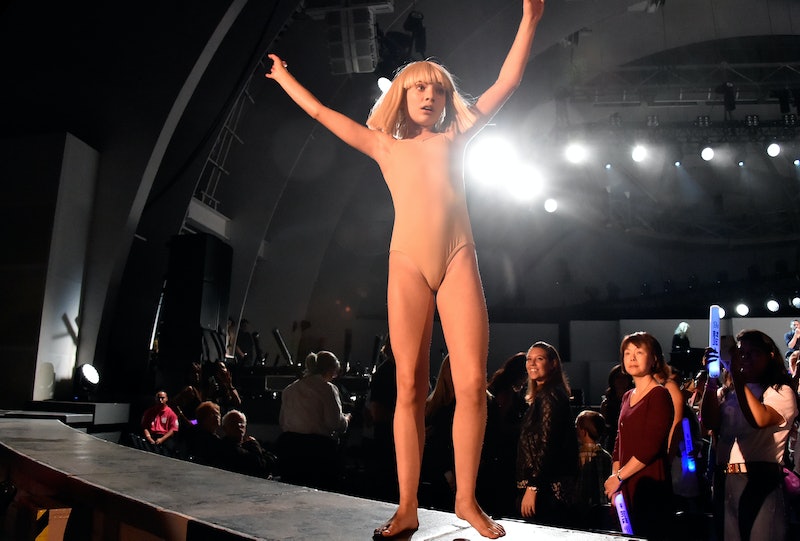 Recently, after writing an article about Kate Moss, I started watching the show Dance Moms. Why? Because apparently, Kate Moss is a huge fan of the show — meaning, yes, it was more than acceptable that I become hooked on the reality program too. Once I tuned in, I began to put together that the show's main star, Maddie Ziegler, was also that girl in the platinum wig from those somewhat creepy Sia music videos. And then, suddenly, Maddie Ziegler started popping up everywhere. From Teen Vogue features, to interviews on popular fashion sites, the girl was a celebrity. But here's one thing I kept forgetting: Maddie Ziegler is only 12. She hasn't even reached her teenage years yet, and she's got people clamoring to know what concealer she uses.

To be fair, Ziegler has been a dancer and in the spotlight for essentially her entire life, both gigs that are usually associated with makeup (especially in the dance world — makeup is an absolute must for performances). Still... is anyone else a little disturbed that Ziegler starting developing a daily makeup routine at age 8? I mean, yeah, of course, she is way cooler than I ever was at 12. But I can't be the only one who finds it scarily easy to mistake her for being much, much older than she actually is?

Here are four times that Ziegler proved she's stylish waaaaay beyond her years.

When I first saw Ziegler's photoshoot for Teen Vogue, I honestly thought I was looking at a 20-year-old model, but no — just a kid casually hanging out in her house discussing eyeliner.

It's not that Maddie Ziegler is sexualized or dressed scandalously in the video—she's only wearing a simple tan leotard and a platinum blonde wig. But both the Chandelier and Elastic Heart videos are, in a word, mature. They're a little strange, a little shocking, and pretty confusing as a whole. And in both videos, Ziegler's talent is incredibly obvious. It's hard to believe that much talent is coming from a 12-year-old girl, and it's even more difficult to believe that she's able to translate that talent into a video that is so different from what most artists release.

The girl is wearing a white suit and a statement necklace for a Good Day LA appearance and in this video, she is not even 12 yet. She's 11. And she looks more mature than I, a 22-year-old, do on most days. During the entire interview, she's more professional than both of the hosts combined. You really do have to see to believe it all.

4. When She Went To The VMAs

Again, she's only TWELVE. Can you tell I'm still having a tough time with that yet? First of all: THAT HAIR. Second of all: THAT MAKEUP. Third of all: THAT DRESS. I'm not sure whether I'm concerned that she's growing up too fast or genuinely jealous of her style. Maybe both?