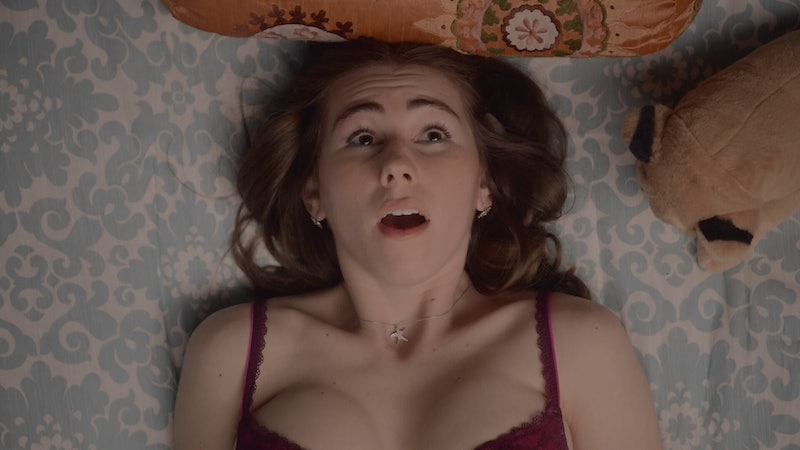 When it comes to women’s feelings about receiving oral sex, it’s a complicated discussion. Unlike men who, by and large, seem to love receiving oral sex under most, if not all circumstances, for women, it’s just not that simple. For us, there are many other factors that come into play — and the two big ones are skill and trust. If we’re not feeling secure, then for most of us, no matter how well our partner knows their way around a vagina, we’re just not going to be able to get that into it.

Then, of course, there are those situations where the person on the other end is clearly confused as to what is where and how to even handle our anatomy. That can make for an even more awkward situation, especially for women who are already feeling insecure about being in such a vulnerable position. It’s not easy to be spread eagle in front of someone else, and even those in committed long-term relationships would sometimes rather do anything but that.

"For me, when [my partner] goes down on me it's the Shavasana pose in yoga. Like, I know I deserve it, it's really relaxing, but if I don't focus on my breathing, I'll just fall asleep. I can do without it, especially because in the case of him going down on me, that breathing is fake moaning. Not because he's bad at it, but because I'd just rather do other things … like sleep."

"It's all good with me. I have to not trust the guy or something to not be OK with it, which, to be honest, means dude didn't get into my bed in the first place."

"I love it, if they know what they're doing or will take instruction. The worst is when they think they're good at it or don't take any of the hints of how I'm physically or verbally responding. I mean, it's best if they're already pre-trained and know what they're doing. But I'm happy to tell someone what I like, if they'll listen."

"I hate it. Hate it, hate it, hate it. I don't know if it's because my first husband — who was also my first sexual partner — was completely adverse to it and I developed a shame for it? But post-divorce, there were dudes who were totally into it, and I would end up either having a panic attack about it, or it would do absolutely nothing for me because I was just waiting for it to be over. Hate it. Ew. No. Gross. Hate."

"I can go without it. Even when it's good, it's not good enough to do anything for me. My partner loves it, so sometimes I'll give in to his request, but I'm just doing it for him. When he does, I just think of it as a great time to figure out what I need to do for the week. He knows I don't care for it, but he doesn't know that I use it as time to organize my to-do list."

"Love it when it's done right, without any pressure for me to climax quickly. Most guys in my experience don't know what they're doing, so it just gets kind of awkward and frustrating. It's all about the partner."

"I usually hate it, partly because most guys are horrible at it, and partly because it is so incredibly intimate to me. There are very few dudes I'm down (ha!) to get that intimate with. With girls, I'm more of a giver than a receiver, so it's mainly a moot point.

I also have a lot of weird baggage associated with it, because the first guy I dated who actively loved giving head, rather than just being kind of into it, was also seriously abusive. Since it got to a point when a lot of our sex life wasn't the most consensual, to say the least, I don't exactly have the greatest associations with getting head, and without massive trust, the whole experience is just stomach-turning.

That said, with the right combination of trust and talent, it's the greatest thing. My current partner is a champion, and I love it when he eats me out."

"I'm a huge fan of it with the right person and enough effort. I'm a big giver, but as I age I expect things to be more balanced and am more comfortable giving direction ... trust and effort are huge in my book."

"I have zero hangups about receiving, always loved it. When I was young, inexperienced, and penises kind of freaked me out, this activity had the least amount of pressure. After all, I don't have to worry about not knowing what I'm doing, I can just lie there and have fun! (Also, I got lucky that so many [of my] early partners — many of whom were women — were decent at it.)

I only had one partner that was not great at it, but I think it had more to do with his previous partners liking totally different things from me. He was good at other things and willing to learn, but I just would get impatient, flip him around and jump on top, rather than taking the time to teach him. My bad."

"Receiving? Eh. People always counter with 'you've just never had good head then.' And no — I've had great head — but it's so far and few between, I'd rather just not get head than be disappointed yet again by another dude who thinks he's God's gift to oral sex, but can't find a clit to save his life. And those are also the guys who get really offended if you try to direct them. 'I know what I'm doing!' You obviously don't because I have now made my to-do list for when you finally f*cking leave and it's 50 items long."

"My ex and first partner was awful at it. I hated it and usually would just be waiting for it to be over. The next guy was pretty good at it, the next guy probably majored in eating out in college. So I guess I've come to love it. And at this point, I've come to know what they can do that really gets me going and so I'm happy to give driving directions."

More like this
7 Women Share Their Best Orgasm Stories
By Lexi Inks
We’ve All Had Bad Sex. Nona Willis Aronowitz Is Talking About It.
By Sophia Benoit
The Best Time To Date After A Breakup, According To Experts
By Bustle Editors
How Do I Deal With Both ED & Premature Ejaculation?
By Sophia Benoit
Get Even More From Bustle — Sign Up For The Newsletter