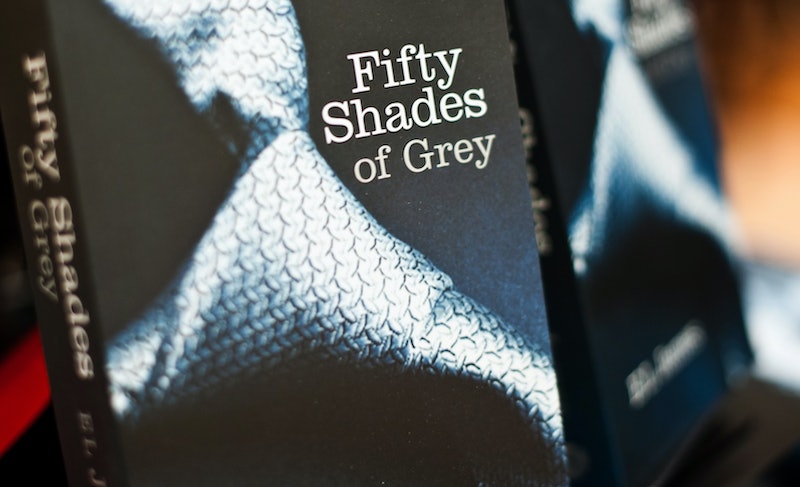 It's no wonder there's been so much anticipation for Fifty Shades of Grey; there's been so much buzz about the upcoming film version of E.L. James' sexy, steamy novel that it's bound to break the box office when it's released on February 13. From the moment that the first trailer — which, all in all, stacked up pretty good — was unleashed onto the web, fan expectations for this movie have been at an all-time high. Of course, the reason for this has a bit to do with the film's stars (Jamie Dornan and Dakota Johnson take on the roles of Christian Grey and Ana Steele) as well as the plot: But, honestly, I'm pretty sure the biggest reason this film is such a gigantic phenomenon is really very simple: all the sexy times it happens to include.

As Bustle's very own Kadeen Griffiths so kindly outlined in her investigation into all the explicit sex scenes in the book version of Mr. Christian Grey's seduction of Ana (page numbers included), the book certainly features a lot of them. But, now, the question becomes: How many of them will be in the film?

Turns out, apparently, the movie will consist of 20 minutes of sex scenes out of a total 100 minutes running time — or in other words, exactly one-fifth of the total length of the movie. That's a pretty hefty percentage, all things considered.

But how does that whopping twenty percent of NSFW scenes stack up to the amount of sex scenes in the book? Sure, there is obviously a world of difference between how books and movies interpret sex scenes, but does the movie cut down on all the "is it hot in here" content from E.L. James' book, or does it stretch 'em out for peak viewing?

Thankfully I have some rudimentary math skills, so it was an easy problem to solve.

To the source: Amazon.com tells me that Fifty Shades of Grey is a cool 514 total pages. Using Griffiths' handy-dandy guide I mentioned earlier that details brief and helpful synopses of the sex scenes in the book, as well as the page numbers they span, the total number of pages dedicated to that NSFW stuff is 67 pages.

Only 67 pages out of 514... that's only thirteen percent. What did the moviemakers do to get that extra seven percent? Did they take liberties with the source material and add some more sex dungeon fare? I mean, if so, viewers will probably be down — this is Fifty Shades we're talking about.

It's worth considering that, because Fifty Shades earned an R-rating, it probably won't be as explicit as you might think. But, it looks like the filmmakers took extra effort to make the movie sexier than the book, so don't fear, if you were worried the movie was gonna be too prudish.