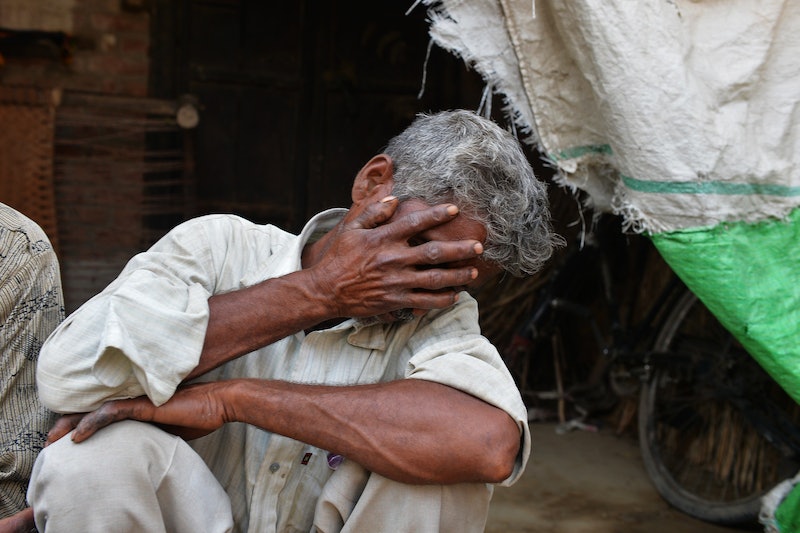 There’s a video going around of an Indian woman who has turned the camera a man who was harassing her, holding him accountable for his actions and publicly shaming him. So far, her name hasn’t been revealed, but either way, she’s my hero. Not only does she publicly call him out for his actions and refuse to be silenced, but she also gives him a lesson on what it’s like to be a woman.

According to BuzzFeed, the incident took place on a Indigo flight to the eastern city of Bhubaneswar. The video was uploaded by YouTuber Shreyas Rao, with a description saying it was forwarded to him by the victim. In the video’s description, he included the message from the woman describing what happened. Apparently the man was seated behind her and at some point during the flight, he “put his fingers in the seat gap to touch [her].” At first, she was too shocked to react, but when she caught him trying it again after the plane landed, she’d had enough and decided to let him have it. She wrote:

I created such a scene, humiliated him in front of the whole flight! He thought like usual girls will keep quiet and he can get away with this! I have lodged an FIR now! He is a very rich man of bhubaneswar and is now very humiliated in front of the people who know him. Cant believe the ordeal i had to go thru but being silent is a crime! The police officer was very helpful and the Indigo staff remained with me throughout. The man is under police custody currently.

In the first video, the man can be seen covering his face with his hands and avoiding looking at the woman while begging for her to forgive him, but she’s having none of it. To her, his actions were indicative of his belief that because she was a woman, she would be too ashamed by his actions to speak up. Clearly, he was wrong. Throughout the video, as other passengers look on, she addressing him loudly in Hinglish, a combination of Hindu and English. BuzzFeed India translated the video:

Girl: “You’re asking for forgiveness. Why? Because I’m a girl? And you have the right to touch me any time, anywhere you want to?”

Girl: “What forgiveness are you asking for? Did you do it only once? Was it by mistake? Look at how old you are. Old moron. Half way into your grave and still not wise enough. Say more? Say more, come on. I’m videotaping you, mister! If you ever do this again, you’ll remember this episode. You think us girls stay silent and you can do anything, right? Look here. Why are you so bashful now? I will call security. I’ll make sure I make a complaint.”

Girl: “Yes, I have purposefully done that. You thought you could do it again, right? You were touching me here again the second time. You thought I didn’t know what was going on and I would stay quiet, right? Only us girls are expected to have shame. You have a right to be shameless.”

In a second video, it's disappointing to see that the man no longer even has the decency to look ashamed. He's smiling at the woman and offering her a written apology, as if that's enough for touching her inappropriately. When he claims he would forgive anybody who harassed the women in his family if they asked for forgiveness, she responds with “Oh, OK, you’ll forgive him. Call them. Call your daughter here. I’ll talk to her.” In the second video, a second man, who's off camera, is also recording and confronting the harasser.

I applaud this woman for refusing the idea that just because she’s a woman and the victim, she should suffer in silence.