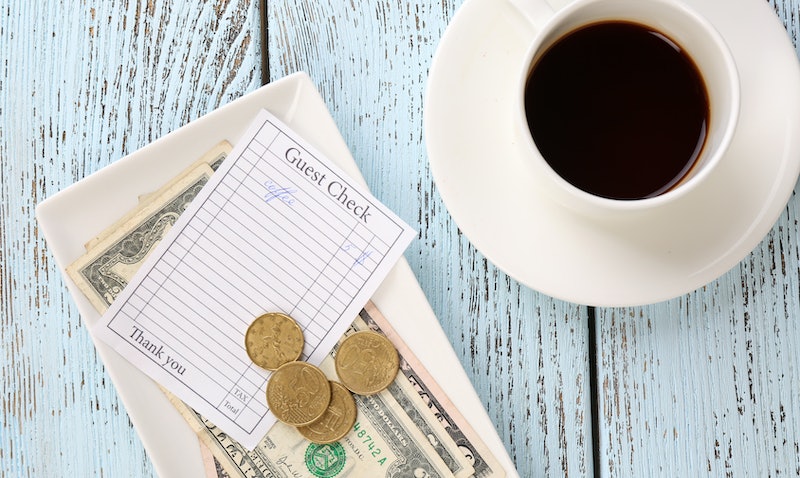 You may have recently spotted an article in the New York Times about tipping — or more accurately, an article about "tip creep," the term used to describe rising gratuities across service industries of all kinds. Interestingly enough, though, the thing about this article that most of us have latched onto doesn't concern "tip creep"; it concerns whether or not you tip for coffee. The question led to a rather spirited conversation here at Bustle HQ, which made us all realize that we really, really need to brush up on our tipping etiquette.

Does culturally embedded tipping as a practice kind of suck? Yes. But until a major paradigm shift happens wherein tipping is suddenly recognized for the bullshit that it is, we all still have to follow the rules. Or, okay: Maybe we don't have to follow them, but if you're a decent human being, you will, because tips are often the difference between a server making enough to pay their rent that month or not. In the U.S, if anyone has delivered you any type of service — they made you a latte, they pulled you a beer, they provided table service, they gave you a rockin' haircut, they did some heavy lifting for you — generally you should expect to tip them; in case you've got a few questions, though, here are 17 pieces of tipping etiquette everyone should know (unless you go to another country, in which case it's a whooooooole 'nother ball game):

1. Get familiar with a few common percentages:

2. Technically there's no obligation to tip in these situations:

4. What about smoothie shops? Ice cream shops? Other shops that aren't sit-down places, but which have tipping jars?

Follow the tipping jar etiquette described above. Generally, the rule is $1 or $2 per smoothie/sundae/whatever. Look at it as being in the same vein as how you tip a bartender.

5. Don't penalize the waitstaff for things someone else screwed up.

Waitstaff are in the unenviable position of not only waiting on you hand and foot (but remember: There's a difference between "serv er " and "ser vant !"), but also of being the face of the restaurant. This means that a lot of the time, they bear the brunt of every single customer's ire, should something go wrong. Did the kitchen screw up and forget to make your food, even though the server followed protocol and put your order in just the way they were supposed to? Don't punish the server for that. They're the only people who get hurt by it, and it's not even their fault in the first place. Tip as you would normally, and if there's an issue of any sort, talk to management about it (nicely! Don't be a jerk!).

6. If your table service is really terrible…

Originally I was going to say, yeah, go ahead and tip less; others, however, might feel otherwise. My take on it was this:

Is the entire place restaurant full and your server is literally the only one on the floor? They're probably absolutely slammed and doing the best they can under the circumstances. There are only so many places one person can be at once; management should have had more waitstaff on the schedule to handle it all. Don't stiff your server. If, however, the place is practically empty, your server ignores you for extreme lengths of time, and you keep catching them hanging out at the bar and watching the game instead of doing their job? First try to talk to someone about it (again, nicely! No unnecessarily jerky behavior, please!); then if they continue to not do their job, then I would say go ahead and tip less. I say this as a former service industry worker myself, by the way. I have no patience for people who don't do their jobs.

But, as Gothamist pointed out last spring, docking the server also means you're docking the folks they share their tips with (because that's a thing, in case you didn't know — waitstaff “tip out” table busers, back of staff, and a whole lot of other people, all of whom also helped get your food to your table). It's a good point, so it might be worth going with Gothamist's suggestion instead: Leave a 20 percent tip as usual, but to talk to the manager about the server.

Remember that whole “talk to someone about the problem first” thing? DO IT. Servers and/or management can't fix the problem if they don't know there's a problem in the first place. Also, no matter how awful your server was, leaving a note in the tip line that says “NO TIP YOU SUCK” is just mean.

8. Don't tip anyone in the love of whatever deity in which you believe.

Jeff the God of Biscuits may love them, but it's not going to help them pay their rent.

You know how much servers earn per hour in the U.S.? Usually around $2 or $3. It's true that if, after tips, they don't make minimum wage, their employers are supposed to make up the difference; however, when you don't tip waitstaff, you're not fighting the good fight against the tipping system. The restaurants themselves don't really feel any heat from it; you're just screwing the servers. That's not how to change things.

10. If you're at a restaurant that has abolished tipping, congrats! You don't have to tip.

This is how to change things: Support places that have already gotten rid of tipping and pay their staff a livable wage. Everybody wins!

11. It's OK to use the “custom amount” function on electronic payment apps.

Seriously. It's OK. You can do it if you really, really want to. But if it's a tipping situation, don't use it to leave no tip at all. All the other rules still apply.

Whether it's a haircut, a manicure, or a waxing, salon services should always get a 15 to 20 percent tip, according to Emily Post.

13. At hotels, doormen and bellhops are tipped positions...

They brought your bags up to your room? Tip a buck or two per bag. They hailed you a cab! Tip another buck or two. They delivered your room service? Between $1 and $3 is a good number to shoot for.

14. ...As is the concierge in certain circumstances…

There's no obligation to tip if they answer simple questions for you, but send $5 to $10 their way if they book restaurant reservations for you or get you tickets for an event. Where those reservations or tickets really hard to get? Tip a little extra ($15 or 10 to 20 percent of the ticket price).

They're cleaning up after you, after all. Aim for $2 to $5 per day left in your room — there's usually an envelope for you to put it inside, or you can leave it with a note that says, "Thanks, housekeeping!" Emily Post suggests leaving the gratuity daily, but others leave it all in one lump sum when they check out; which method you use is really up to you, although if you leave it by the day, you'll know it's going directly to the person who cleaned your room that day.

16. Movers: Also people you should tip.

According to iTipping, how much you should tip the guys and gals who get your couch, your bed, and all your other stuff from your old apartment to your new one can vary; five percent is about as standard as it gets, though. Also, if you're moving on a weekend, definitely tip well. No one likes to work on weekends.

17. And above all, if you can't afford to tip, don't engage in anything that requires it.

Seriously. Yes, it sucks that minimum wage and tipping conventions in this country are such that we need to do a little mental math and make sure we can take on 20 percent more at the end of a meal — but if you aren't able to afford to do it in the first place, then don't eat out. Similarly, don't take taxis (unless it's Uber, I suppose, since technically you're not supposed to tip Uber drivers). Or do any other thing that calls for tipping. Stay home and save the money you would have spent on your tip-less bill instead.

More like this
The 6 Best Spill-Proof Coffee Mugs That Reviewers Love
By Tiana Crump
I Tried The $20 TikTok Viral Oishii Strawberries — Here's What I Thought
By Sophie Hanson
Trust Me, Pickle Martinis Are The New It Drink Of The Season
By Emma Carey
The 4 Most Forgiving Zodiac Signs
By Kristine Fellizar
Get Even More From Bustle — Sign Up For The Newsletter