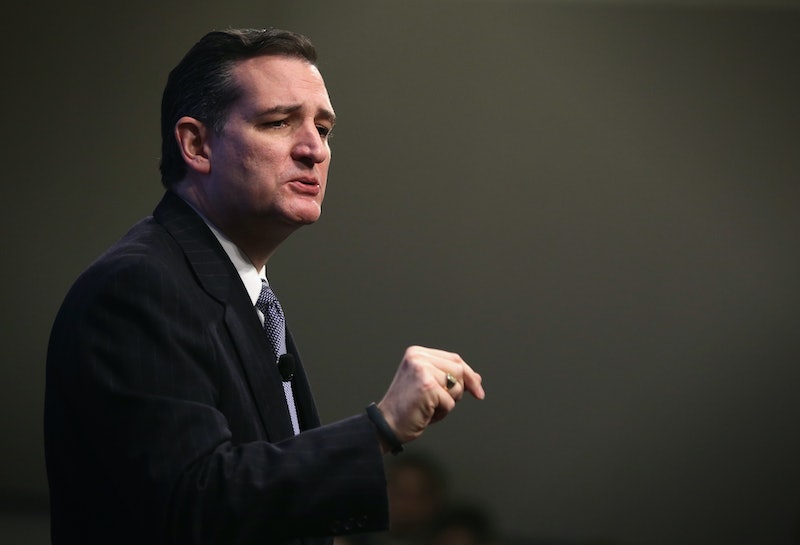 Previous pot-smoking politicians are coming out in droves, the most recent being Sen. Ted Cruz, who recently admitted trying marijuana as a teenager. Not only does Cruz join a bunch of other elected officials in the U.S. who have toked once or twice, but he's also now on the growing list of possible GOP 2016 contenders who have conceded that they've puffed the magic dragon.

The Daily Mail Online asked the spokespeople of 10 likely Republican presidential candidates if their would-be presidents had ever smoked marijuana. Seven responded, but Cruz was the only one with new information. Donald Trump, John Bolton, and Rick Perry each gave a definitive "no." Carly Fiorina, Marco Rubio, and Rand Paul all deflected the question, giving neither a "yes" or "no," and Scott Walker, Chris Christie, and Ben Carson never responded to the request. When it comes to Cruz's explanation, his spokesperson told the publication:

Teenagers are often known for their lack of judgment, and Sen. Cruz was no exception. When he was a teenager, he foolishly experimented with marijuana. It was a mistake, and he's never tried it since.

Now, it's not clear whether Cruz chiefed just one or two reefers in his life or if he blazed his way through high school with bloodshot eyes, but it's just yet another unsurprising "revelation" from the Republican senator. Just a few weeks ago, #TedCruzCrimes trended on Twitter when news broke that Cruz was ticketed for possession of alcohol as a minor. There's no hashtag yet, but Twitter has responded in somewhat similar fashion.

Of the other politicians who are considering running to become the GOP presidential candidate in 2016, Jeb Bush and George Pataki have also admitted to trying marijuana. Although Paul deflected the Daily Mail Online's question, he has previously hinted at it without confirming.

A story in The Boston Globe detailed Bush's marijuana use at boarding school, something he has in common with his brother, George W. Bush, who admitted once his presidency was over that he used to get high. In one of the greatest details of the article, a former classmate said Bush used to not just smoke pot, but smoke hash and listen to Steppenwolf. Bush said:

I drank alcohol and I smoked marijuana when I was at Andover. It was pretty common.

So many politicians have smoked weed that it's not even a big deal anymore. If you're keeping count, that's now at least two frontrunners — if Cruz is to be considered a frontrunner — who have admitted it. And with at least our last three presidents having sparked a joint before, it might actually be better for any presidential hopefuls to just go on and tell the truth. Some people might have a vested interest in keeping it secret if they did, such as Christie, who declared marijuana would never be legal in New Jersey as long as he was governor. For those hedging on telling us though, it's 2015. You'll be OK.

More like this
Eurovision Has Been Given A Whole New Look Ahead Of Its Liverpool Debut
By Bustle UK
8 Charities To Donate To During Black History Month
By Alexis Morillo
25 Galentine's Day Games To Play On Zoom With Your Long-Distance Besties
By Mia Mercado
How To Curl Your Hair With Leggings, According To TikTok
By Carolyn Steber
Get Even More From Bustle — Sign Up For The Newsletter
From hair trends to relationship advice, our daily newsletter has everything you need to sound like a person who’s on TikTok, even if you aren’t.