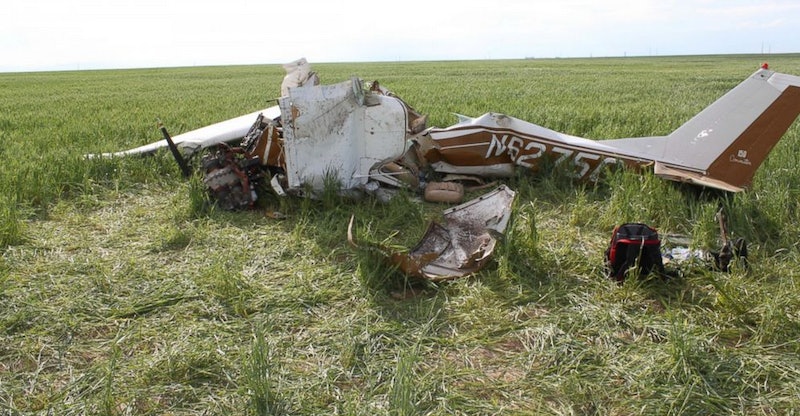 After a nearly year-long investigation into a deadly plane crash that killed two Colorado men last May, officials at the National Transportation Safety Board (NTSB) have determined that the accident was caused by the pilot taking selfies on his cell phone. Investigators found a GoPro camera with conclusive video evidence near the site of the wreckage some 25 miles east of Denver and reported that the men were likely using camera flashes to take "self-photographs," which might have led to disorientation before the fatal crash.

According to NTSB officials on the case, footage from previous flights indicated that both the pilot and passengers were in the habit of snapping selfies during takeoff and throughout air travel traffic patterns. The plane itself was registered to 29-year-old Amritpal Singh, who family members say was flying the Cessna 150, fixed-wing, single-engine aircraft that morning before losing control in overcast, foggy conditions and crashing into an open field on May 31. Although Singh wasn't inexperienced (he had logged 726 total flight hours and 27 hours flying at night), official logbooks showed that he had insufficient training in instruments to deal with engine stall (which caused the plane to plummet) or night flight with passengers.

In their report, the NTSB concluded:

The GoPro recordings revealed that the pilot and various passengers were taking self-photographs with their cell phones and, during the night flight, using the camera’s flash function during the takeoff roll, initial climb, and flight in the traffic pattern.

[...] A postaccident examination of the airplane did not reveal any preimpact anomalies that would have precluded normal operation. Based on the wreckage distribution, which was consistent with a high-speed impact, and the degraded visual reference conditions, it is likely that the pilot experienced spatial disorientation and lost control of the airplane.... Contributing to the accident was the pilot’s distraction due to his cell phone use while maneuvering at low-altitude.

The incident marks another ugly milestone in a disturbing new selfie trend that pushes the idea of "extreme photography" — capturing the most unique photos often yields the most social media hits, after all. Most recently, the U.S. Forest Service had to reprimand park visitors about trying to take selfies with wild animals — specifically bears.

Back in August of last year, a Polish couple fell to their deaths while attempting to take a selfie on the cliffs of Cabo de Roca in Lisbon, Portugal. A week earlier, a Mexican man accidentally shot himself in the head while posing for a selfie. And no one can forget YouTube user Jared Michael's brush with death last April after he was kicked in the head while posing in front of a passing train.

With the number of selfie-induced accidents on the rise (Instagram documents thousands of photos under the #DrivingSelfie hashtag alone, prompting serious concerns), it's unclear how many more close-calls and tragic deaths will occur before people start taking the problem seriously. For now, the use of handheld cell-phones while driving is banned in 14 states, and the Federal Aviation Administration (FAA) has banned the personal use of electronic devices in the cockpits of commercial flights. It's a good first step — but unless the public makes a concentrated effort to encourage personal responsibility in adherence to these guidelines, this tragic Colorado crash might not be the last.