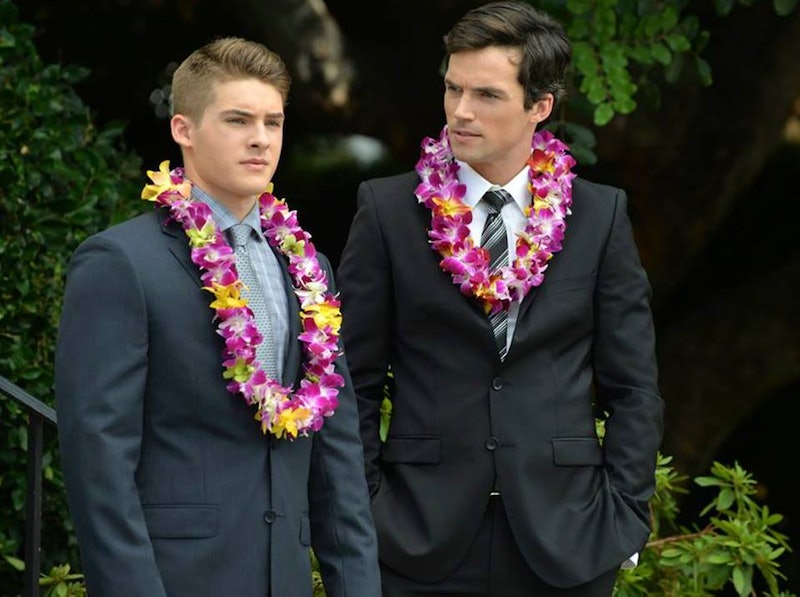 Did anyone else totally forget that Mike Montgomery existed until Pretty Little Liars Season 5B started? I can't be the only one that's questioning why Aria's little brother has suddenly become a potential A-Team member. Sure, Mike was dating Mona and that caused a minor stir, but after that he kind of dropped off the face of the earth again — exactly where we like him. However, Tuesday's new episode, "Oh, What Hard Luck Stories They All Hand Me," the series revealed that Mike is visiting Alison in prison on PLL and he's also acting shady as hell. Typical Montgomery behavior.

At this point, the only Montgomery that PLL hasn't tried to convince fans might be 'A' or working for 'A' is Ella (bless her soul). Sure, fans have been theorizing that Aria is 'A' for as long as the series has been on ABC Family but this is the first time we've questioned Mike. OK, fine, I've questioned why Mike seemed like such a disposable child in the past, but never whether or not he might be totally evil. But, apparently, we've got a new red herring in our midst.

On Tuesday's episode, PLL revealed that Mike's visiting Ali in prison as well as leaving creepy bags of gumdrops on a bridge. And, when Aria confronted him about all of this shady business, he really looked like he might kill her. Just like that, Mike Montgomery's storyline has gone from zero-to-100 REAL QUICK. In the same episode he creeped out Hanna and Leslie (what is her deal anyway?) when he went nuts over Mona's book leaving her room, he creeped out Aria on the bridge by telling her to "be careful walking through the woods," and he creeped me out at the end of Tuesday's episode when he went to visit Ali and was so obviously the wearer of the black hoodie in the episode's final moment.

What is Mike's deal? Why would PLL make him such a major player this late in the game? Unless he's been playing all along, under our radar — either Mike only started dating Mona under Ali's direction and he's a total sociopath or he really doesn't believe that Ali killed Mona and she's convinced him that she'll help find Mona's killer if he can get her out of jail. Either way, apparently Aria's not the only Montgomery Rosewood should be looking out for.

More like this
Everything To Know About The 'Pretty Little Liars' Reboot On HBO Max
By Mary Kate McGrath and Jack Irvin
Who Could Die In The Stranger Things Season 4 Finale?
By Kadin Burnett
Julie Andrews Revealed A Surprising Behind-The-Scenes 'Bridgerton' Detail
By Grace Wehniainen
'Stranger Things' Star Joe Keery Ditches The Upside-Down With New Single "Change"
By Radhika Menon
Get Even More From Bustle — Sign Up For The Newsletter