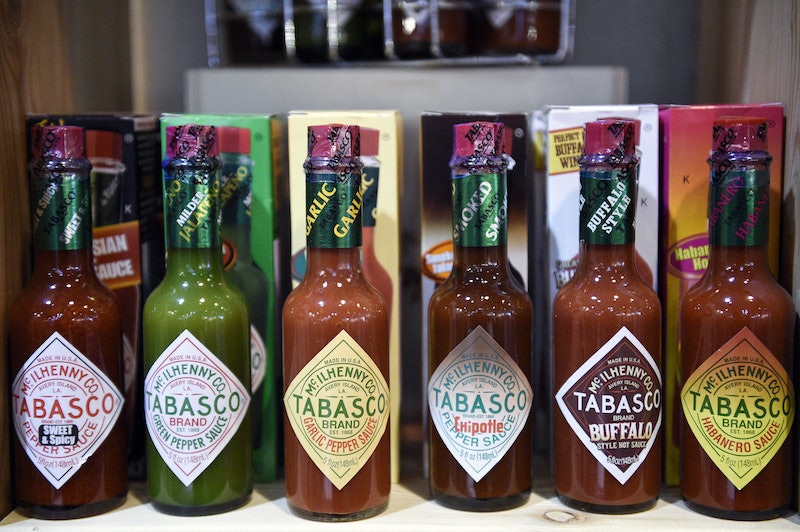 If you're not into spicy foods, 2014 was probably a pretty hard year for you, what with the Sriracha keychains, National Sriracha Week, and general abundance of increasingly weird, tongue-searingly spicy sauces on the Internet. If you're the lone dry-eyed diner left at a dinner party surrounded by a dozen teary people somehow still loudly declaiming that Sriracha is akin to ambrosia, and no, they're totally fine and it barely even hurts, it turns out your white bread upbringing isn't solely to blame: According to science, your personality affects how much you love hot sauce. Sorry, Sriracha. It's not you, it's me.Previous research has linked personality to affinity for hot sauce before, such as a study back in the 1980s that found an association between liking roller coasters and spicy foods. A similar study in 2013 showed a link between participants' scores on the

Arnett Inventory of Sensation Seeking (AISS) scale, which measures the desire for new experiences as well as risk-taking, and their enjoyment of a spicy meal. People with higher AISS scores tended to prefer the spicy food more than those with lower scores, which means my roommate is probably correct to call me unadventurous and boring when I look askance at her for dousing macaroni and cheese in Tabasco sauce. Dammit, science! I feel so betrayed.

The most recent study on the subject, which is published in this month's Food Quality and Preferences, goes beyond just personality to look at gender differences, and the results are pretty much what you'd expect, NPR reports. Women tend to have intrinsic motivations for slathering everything in sight with hot sauce, while men tend to have extrinsic reasons. In other words, ladies like spicy food for the taste, but dudes most likely eat it for the (dubious) bragging rights that come from eating an entire glob of wasabi at once. Lead authors Nadia K. Byrnes and John E. Hayes put it best in the paper detailing the results of the study. From NPR: "It is possible that the cultural association of consuming spicy foods with strength and machismo has created a learned social reward for men," the paper concludes.

Hey, if a dude wants to put an absurd amount of hot sauce on his food because he thinks it'll impress me, I'm not going to stop him. I'll just sit back and enjoy my ultra-bland meal while he tries to avoid making the "KHAAAAN" face in public. It's a win-win.