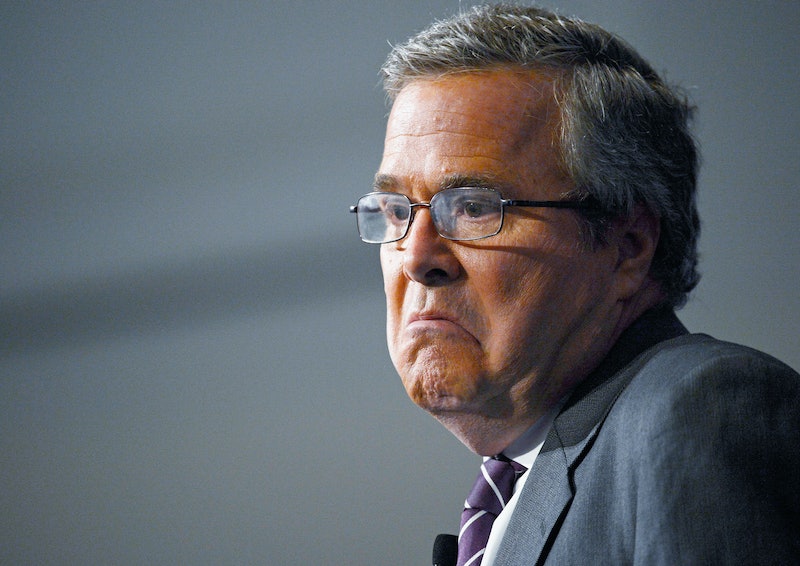 The first task of former Gov. Jeb Bush (R-Fla.) and his presidential exploratory committee: buy back the website JebBushForPresident.com from the self-described gay, nerd couple in Oregon who has owned it since 2008. Now the site’s homepage reads, “Work in Progress,” and promises to serve as a platform for discussions about what it is like to be LGBTQ in America today. Bush, who has historically opposed gay marriage in strident terms, might have a harder time wresting the domain name back for a potential presidential run — C.J. Phillips and Charlie Rainwater told Business Insider that they have no intention to sell.

A “couple of high tech bears who both work in the microprocessor design industry,” Phillips and Rainwater bought the domain name to JebBushForPresident.com nearly seven years ago. Disheartened by a legislative proposal before the Texas state legislature that would allow people to void any marriage-like contracts — a measure that threatened the financial security and medical decision-making of LGTBQ couples who often rely on such contracts in lieu of marriage rights — they decided to start a blog where they could chronicle the political struggles of LGBTQ couples.

“Hi there, and welcome to the page,” the site reads.

CJ and Charlie are two guys in a great relationship who are looking to inform our friends and family about some of the challenges we face being part of the LGBT community. This page is intended to prompt understanding, insight, and healthy dialogue in the ever changing landscape of civil rights and social justice.

While they didn’t intend to advocate for or against a particular candidate, the couple originally decided to use Jeb Bush’s presidential aspirations for their domain name because of his past opposition to gay rights and a number of LGBT policy proposals. Phillips and Rainwater figured that Jeb Bush would put his hat in the ring for president at some point over the next few election cycles and so they held on to it.

On a SquareSpace site linked to JebBushForPresident.com, Phillips explains why the couple chose to highlight the former Florida governor:

Simply put, he was pretty vocal about not extending rights to LGBTQ peoples, and the domain name was available. Honestly, he's got family connections, a whole lotta cash, and a political party behind him... We've got the internet and a couple of hours a day outside of work, school, and tending to the household. This is how we're trying to make a difference.

Now it appears that the domain name is about to beareth its fruit.

In December, Bush announced that he was actively exploring running for the GOP nomination in 2016, and Mitt Romney’s recent announcement that he would not be entering the contest yet again helps solidify Bush’s status as an early favorite.

But Bush might have a difficult time facing down his record on LGTBQ rights in a presidential contest. Back in 1994, during his first, unsuccessful run for governor of Florida, Bush penned an editorial in which he derided the attempt to protect LGBTQ individuals from discrimination as pandering to a special class of victims. The state, his argument went, does not have an obligation to protect the interests of all people from discrimination. After all, we discriminate against “bank robbers, drug dealers, litterbugs, and homeowners who repair their seawall without a permit.” Nor do we grant special rights to “polluters, pedophiles, pornographers, drunk drivers, and developers without proper permits." (Note the equivalence being drawn here between drunk driving and homosexuality. Sigh.)

At the article’s close, Bush took the rhetoric one step further:>

[S]hould sodomy be elevated to the same constitutional status as race and religion? My answer is No.

A spokesperson for Bush told Buzzfeed’s Andrew Kaczynski and Ruby Cramer that the governor had revised his views on LGBTQ rights over the past 20 years and that he would not use the same terminology that he employed in the 1994 editorial if he had been writing today.

But it remains unclear as to whether or not Bush has actually changed his tune on the policies that benefit LGBTQ couples and protect their rights. When a federal court ruled that Florida had to allow same-sex marriages, Bush told reporters that he saw gay marriage as a states’ rights issue and cautioned the courts for overturning the rule of law. The rhetoric might be more tame, but the politics doesn’t seem too different.

And, at this stage at least, any attempt to Google Jeb Bush’s presidential campaign site will bring a reminder of where Bush stands — or does not stand — on LGBTQ rights. Fair play, CJ and Charlie.