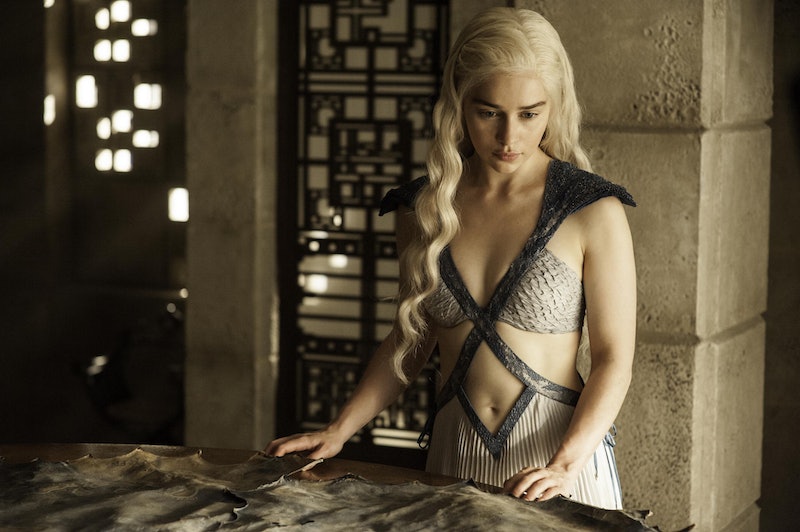 If you're anything like me and the rest of the eager, hungry, completely obsessed Game of Thrones fans of the world, for the past year you've been impatiently awaiting HBO's Season 5 premiere on April 12th to slowly approach us — twiddling your thumbs, biting your nails and trolling the internet for spoilers, leaks, a Season 5 trailer, and any other tidbits in order to attempt to satiate your thirst for everything Thrones. You've been re-reading the books (they're really not that daunting), re-watching the last four seasons, and keeping up with all the gossip and news on the blogosphere in order to distract yourself from the void left by the finale of Season 4. Don't worry, my friends of the Realm. In this, we suffer together.

Game of Thrones gained the massive popularity that has only grown over the years with its twisted and unpredictable plots, beautiful, vast scenery and locations, and deep, complicated characters filled with humanity that we both love and loathe. Not to mention the presence of violence, gods, tits and wine. But looking back on the beloved series (as someone who always had an eye for everything to do with fashion), one of the greatest things that stands out about this show is the beautiful, rich, detailed costuming, and the glorious, epic hair.

Game of Thrones hair has most definitely set the standard for television (and even film, perhaps coming second only to Marie Antoinette by Sofia Coppola) and has influenced us all with its creativity, style and grandeur. So grab a goblet of wine, and let's have a look at all the epic hairstyles we love and the 15 ways Game of Thrones rules the realm of luscious locks:

Probably the most famous hairstyle of Game of Thrones to date, Daenerys Targaryen's Khaleesi braids have changed the world of braids forever. These complex, intricate, impressive braids came to be once Daenerys wed the infamous Khal Drogo and became Khaleesi, quickly turning into Danny's signature look. These braids mix the tribal with the royal — a perfect combination for both a Khaleesi of the Dothraki and Queen of Westeros.

The GoT version of the man-bun, and just as sexy. In Dothraki culture, a man's braid is cut off when he is defeated in combat as a way of emasculating him and showing shame. As demonstrated by his long, luxurious braid, Khal Drogo's hair had never been cut. The longer the braid, the manlier and sexier you are considered — worth eating a horse heart for, even.

As both a Lannister and the wife of King Robert Baratheon, Cersei shows off her status and importance as Queen by her elaborate, regal, ornate up-do. Known as the "hairstyle of the South," many women in King's Landing copy Cersei's style and wear their hair in the same showy way as their golden-haired queen (including Sansa Stark).

When discussing ornante up-do's, one's attention is immediately drawn to Margaery Tyrell's wedding hair during her [brief] marriage to Joffrey Baratheon at the "Purple Wedding." Known for her gorgeous hair and a love and attention to fashion, you can count on Margaery to have a queen-worthy hairstyle to outdo them all. Drawn up in an almost a towering up-do, then left to cascade down her back in perfect ringlets, and topped with a regal crown, her hair was easily the grandest spectacle at the wedding — aside from Joffery's timely demise, of course.

Once Daenerys is invited as a guest into the Great City of Qarth, her hairstyle becomes looser and more relaxed, as she trades in her signature braids for long, free-flowing crimped hair — which still leaves the ghostly imprint of her former braids, remaining true to her identity and status.

When not twisted up in ornate up-do's, the women of Westeros tend to wear their hair in long, luscious waves — putting all mermaids and princesses to shame.

To add to the glory of her long, red waves, Melisandre sports a large, elaborately braided hair bun at the top of her head — surely her version of a crown that the Red God gave her.

Although most of the female characters tend to favor long, luscious locks, there are some others (such as Arya Stark and Brienne of Tarth) who sport a more boyish look with short, cropped hair in true tomboy-style. After all, who wants their hair getting in the way of fighting men?

9. THE POWER OF THE PONYTAIL

After moving to King's Landing, Margeary Tyrell brings with her her wealth, her family, and of course, her personal style. One of her most glorious hairstyles (aside from her wedding 'do) is her power-ponytail. Always seeming feminine, polite and gentle, Margaery is also wise, cunning, and ambitious — much like her hair always demonstrates.

One is King in the North, the other a Watcher on the Wall, but both Robb Stark and Jon Snow share something in common (other than being brothers with pet wolves), and that's their natural, sexy man-curls. These two easily coin the term "heartthrobs" within the show, and really, we can thank their sexy, deliciously curly hair for that.

Game of Thrones seems to have quite a love for redheads, including characters such as: Catelyn Stark, Sansa Stark, Melisandre, Ygritte, and even everyone's favorite lady of the night, Ros. These women have all been "kissed by fire" and their red hair is always something that especially stands out (and tends to be quite a popular sign of attractiveness to boot).

Braids, waves, curls, and up-do's may take the stage in Game of Thrones, but you can't forget the cool dye jobs when one wants to get creative with the hair of a faceless man.

When coming from the South (and I mean the real South, not what King's Landing claims as "south") one has to represent a sense of the exotic. Ellaria Sand, paramour of Oberyn Martell, Prince of Dorne, shows off her exotic beauty by wearing delicate gold chains draped over her head and hair, true Sand-princess style.

If you didn't know already, Game of Thrones loves its wigs. Let's be real — the majority of the hairstyles we love in the series are thanks to the glorious, beautiful wigs used by the hair and makeup crew. Daenerys Targaryen's hair? Wig. Cersei Lanniser's hair? Wig. Margaery Tyrell's hair? Wig. Melisandre's hair? Wig. You get the idea. Even some of the men's hair are wigs, including Viserys Targaryen and our beloved Ned Stark.

Despite using a plethora of different wigs in the show, there are also a lot of characters who show off their lovely natural locks, such as Sansa Stark, Shae, and Missandei. Whilst somewhat shadowed by the splendor of their wig-counterparts, these natural hairstyles are still gorgeously beautiful and glorious in their own special way.

More like this
How To Curl Your Hair With Leggings, According To TikTok
By Carolyn Steber
An Honest Review Of BeautyTok's Beloved Sleepy Tie Hair Tool
By Rebecca Strong
This Week’s New Makeup Releases & More Beauty Headlines
By Audrey Noble and Erin Stovall
13 January 2023 Beauty Launches Our Editors Can't Get Enough Of
By Rachel Lapidos
Get Even More From Bustle — Sign Up For The Newsletter
From hair trends to relationship advice, our daily newsletter has everything you need to sound like a person who’s on TikTok, even if you aren’t.