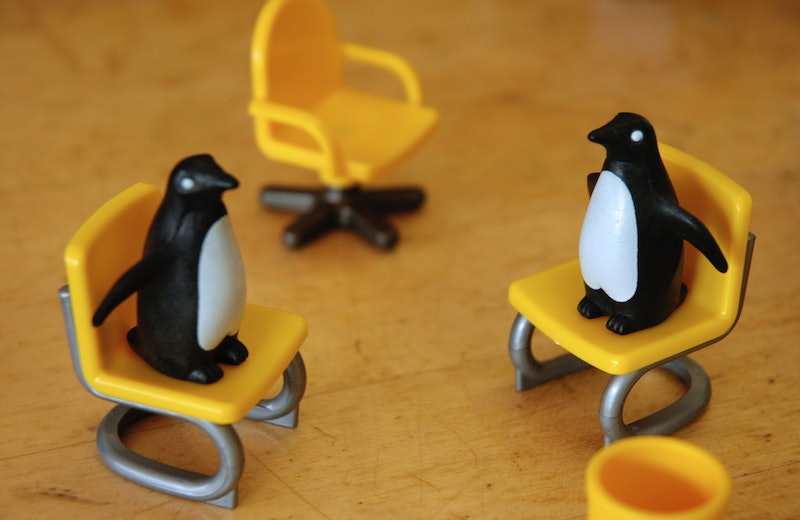 I'm a little wary of office romances, mostly because as far as I can tell, they pretty much never end well. If however, you've been thinking lately about trying to get a little somethin' going on with someone at work, you definitely need to watch Fast Company's “How You Really Sound While Flirting With Your Office Crush” video first.Seriously. It's required viewing for everyone who has ever existed in the entire history of the universe — and not just because it's useful. It's also really, really funny. Happy Hump Day, everyone!

Like FastCo's hilarious and informative “How You Really Sound in Job Interviews” video, this latest offering features performers from the Upright Citizens Brigade illustrating a wide selection of workplace do's and don'ts. This time, of course, they're geared towards how to flirt with your office crush — or perhaps more accurately, how not to flirt with your office crush. Creepy behavior is always a no-no, but it's especially frowned upon in your place of employment. No matter how classy and professional you think you're being, you're probably weirding everyone out — and whatever you're doing might even qualify as sexual harassment. (And no, just because you don't mean something as harassment doesn't mean that it isn't harassment. It is, and you need to stop.)

None of this is to say that you can't have an office crush, by the way (they're kind of fun, after all); you just need to be aware of your behavior such that you maintain a sense of professionalism, even around someone you dig. Check out a few highlights here; then scroll down to watch the whole video:

You think you say: “Nice haircut!”

Everyone likes a compliment, right?

You actually say: “Woooooooow, haircuuuuuut! I love it! It's like... sex hair!”

This is not a compliment. This is extremely inappropriate.

You think you say: “You on Facebook? Friend me? Awesome, thanks!”

Networking is part of the job, after all…

What you think you do: Laugh mildly but encouragingly at an amusing joke or anecdote.

What you actually do: Laugh maniacally and terrifyingly at an amusing joke or anecdote.

Or rather, well-told jokes deserve acknowledgment in moderation.

What you think you say: “Mind if I join you? What are you reading?”

Flirting is all about good conversation, right?

What you actually say: “THERE YOU ARE! Salad, gross. What's this dumb book?”

The key word being “good.” This? Is not good.