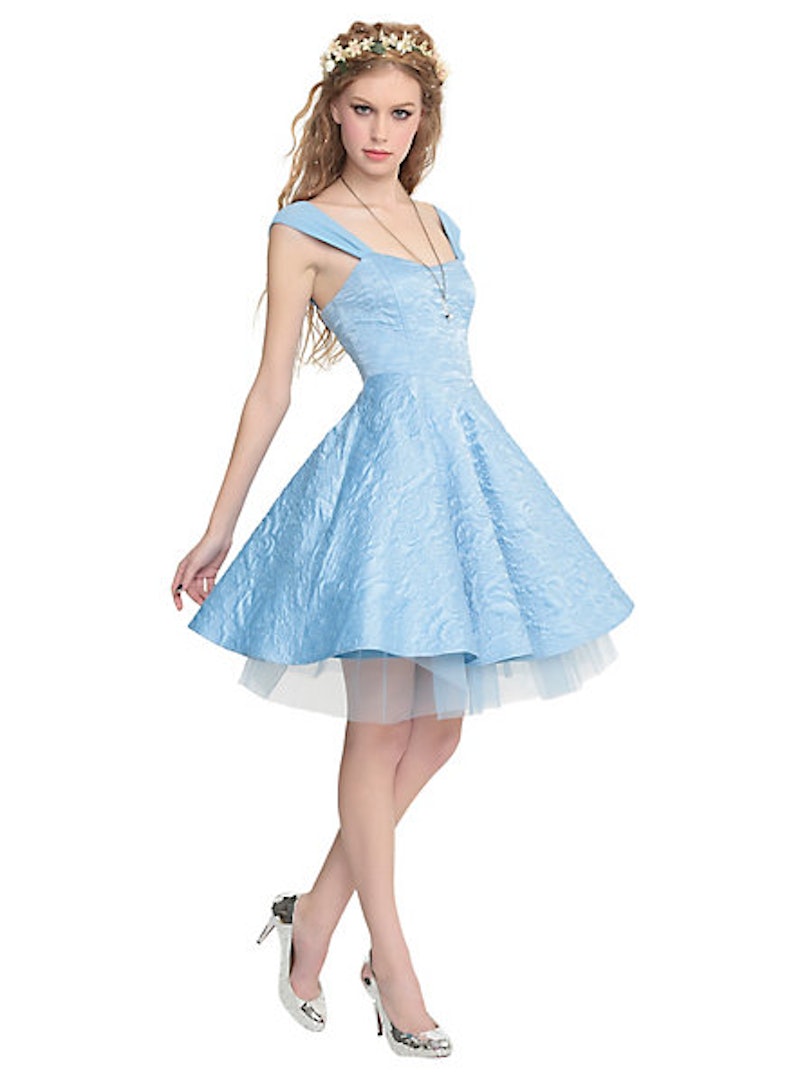 Anyone else recall the Hot Topic of their middle school years? Where all the angsty, pierced kids with black fingernails and spiked chokers would hang until it was time for their mom to come pick them up from the mall? I remember hurrying past that store — with its scary music, dark lighting, and intimidating salespeople — and into the safe, loving arms of Aéropostale as fast as my gangly 11-year-old legs could carry me. Monkey graphic tees and pleated denim minis? Way more my speed… But since then, Hot Topic has taken a bit of a turn toward the tame. Lately, the once edgy retailer has debuted some interesting collaborations and pop culture tie-ins that would have had early 2000’s mall goths gagging. The latest? A Hot Topic line inspired by Cinderella .

The collection is based on the costumes that Lily James wears in the new film adaptation of the classic fairytail. Just a tad bizarre considering that, from what I can remember, Hot Topic’s original target demographic preferred chunky platform boots to glass slippers. But, hey, to each their own. And I must admit, I’m kinda into the texturized Lurex and tulle play on Cinderella’s princess ball gown. It’s not exactly everyday wear but appropriate for when you’re feeling all pretty and regal. Their Peasant Sweetheart Dress would also be perfect for anyone who's permanently in a "steampunk mood." Something for everyone!

But this isn’t the only Hot Topic collaboration that would’ve made my middle school self face her fears and take the plunge into that dark, Hot Topic abyss to get her hands on a princess-inspired frock. Check out these other Hot Topic tie-ins that I'm sure would make the band-tee sporting mall goths of yesteryear decide to buy their Manic Panic elsewhere.

Back in 2010, when everyone was losing their mind over the new Tim Burton film, Hot Topic jumped on the bandwagon with another Disney-inspired line.

What? My Chemical Romance fans don't enjoy a rousing musical theater number here and there?

Just try telling me that Molly Ringwald's character in The Breakfast Club wasn't the epitome of everything goth lite teens are against.

It's a show about a pink pony named Twilight Sparkle. 'Nuff said.

And Good Charlotte, and black eyeliner, and studded belts, and temporary blue hair dye (because you're still 13 and your mother would kill you, obvi).