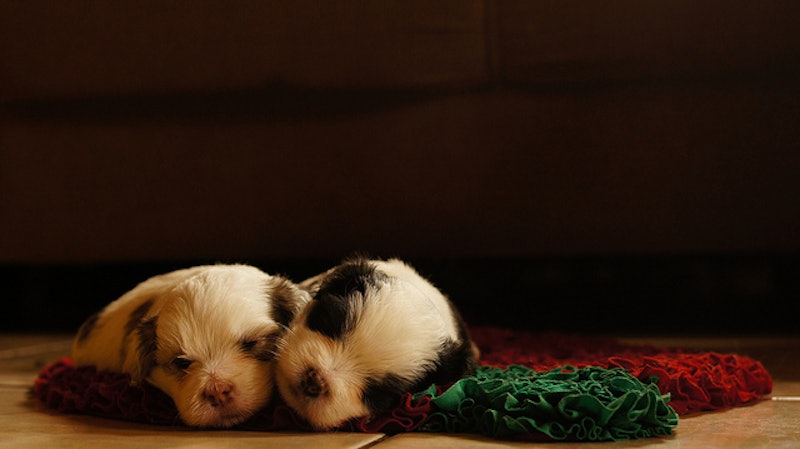 When I met my boyfriend, I thought he was the guy I had been waiting my whole life to find — until we started sleeping together. I don't mean "sleeping together" — I mean, like, actually sleeping together, night after night, in one bed. As we got serious, and ended most nights with an adult sleepover, I realized, with increasing horror, that our dream relationship had one real world problem: we could barely stand to sleep in the same bed.

Though I had never experienced this problem before, it's as common in relationships as "where is this all going" conversations (and twice as unpleasant): some research has suggested that as many as one in three couples struggle with finding sleeping arrangements that satisfy both partners, while other studies show that 25 percent of American couples sleep separately, often due to sleep quality issues.

While my boyfriend and I were still in the honeymoon phase of our relationship during our waking hours, at night, we felt like a long-married couple who could barely tolerate each other any longer. Our wildly different sleeping styles — my boyfriend moved frequently in his sleep, which was deep; I curled into a tiny, motionless ball, and woke up if anyone in the next room even thought about anything particularly hard — clashed, leading us to constantly wake each other up, and spend late night hours in a foggy haze of sleepless resentment.

I was on the verge of buying us I Love Lucy-style twin beds when, through trial and error, I discovered the tips below, which allow us to sleep in the same bed without wanting to murder each other. Not that there's anything wrong with sleeping in separate beds — some people think that it's the secret to a successful relationship, and older couples, who are more secure in their partnership, often go for full-on separate bedrooms. But if you like to sleep in the same bed, don't have the room for a second bed, or just want to reap the supposed health benefits of sleeping with a partner (which, ironically, include better sleep quality), read on. Because if you do break up, it should be over your clashing political views or your glaring sexual incompatibilities — not because you have a rough time sleeping side by side.

1. Get the largest bed you can possible afford

There's an urban myth that king-sized beds are bad for relationships — that they sap your intimacy by allowing you to sleep far apart, that smaller beds somehow create "enforced cuddling" that's beneficial to a relationship, yadda yadda. Let's examine this idea for a second — when was the last time being forced into close physical proximity with someone made you like them more? For instance, are you now married to the last stranger that you had to fight for armrest space on a plane? I thought not (unless you are, in which case: congratulations!). There's never been a study conducted to actually prove this "big beds are bad" theory, and if there was, I'm sure its figures would be dwarfed by the number of divorces incited by one partner's frustration with the other's incessant sleep-flailing.

So fight the urban myth, and get the largest possible mattress you can afford/fit into your home. The larger the mattress is, the less one partner will feel the other's motions. And did you know that a full-size mattress gives each partner a crib's worth of space to sleep in? That is not conducive to relationship harmony; that is conducive to acting like a baby (waking up at all hours, crying, peeing your pants, etc). Don't doom yourself and your partner to garbage sleep just because your Aunt Doris once told you that king-sized beds lead to divorces. Go big or don't go to bed!

Spend enough time sleeping next to someone, and you'll eventually hear that person snore. Serious, heavy snoring can be indicative of a health problem, and should be checked out by a doctor; but non-serious, occasional snoring is a fact of life, and likely something you never even knew that you did until you shacked up with someone who then started complaining about it.

A lot of people swear by ear plugs to block out snoring, but I found that they actually made their own weird noises in my ears. So my solution to my boyfriend's snoring (as well as rowdy neighbors and garbage trucks backing up on our street in the wee hours) has been white noise, and lots of it. White noise creates a sonic masking effect by providing a consistent sound level all night — so that all the random noises that pop up in the night don't startle you (and wake you up). There are fancy white noise machines and iPhone apps, but I've found that the best white noise machine on earth is a small box fan from the hardware store. Run it all year round, and just point it away from you in the cold weather. If it helps me sleep through my next door neighbors coming home hammered, it'll help you sleep through your boo's snoring.

3. Invest in a good mattress topper

If you got the biggest bed you could possibly fit into your abode, and it still feels like your partner is doing rhythmic gymnastics in their sleep every night, it's time to look into a good mattress topper. For those of us who can't afford an actual Tempur-Pedic, a really good mattress topper can turn your bed into a sort of budget Tempur-Pedic — it will absorb most of the vibration from any motions made in bed, making it less likely that your partner's movements will disturb you, and vice versa. I have a memory foam mattress topper, and I genuinely think it saved my sanity and relationship. They're like magic blankets that solve almost all of your sleep incompatibility issues, and they make it feel like you're sleeping on a giant piece of sponge cake. What could be better?!

4. Make sure you have the most stable bed structure possible

If you've taken all these steps, and are still getting woken up by your partner's movements, it's time to break out the big guns: a new bed frame. Certain types of mattresses are incompatible with box springs and can only be used on platform bed frames — check to see if your mattress is one of these, and if this mismatch is the source of your sleep woes. And even if this isn't the case, you might look into a platform bed frame anyway. In my personal experience, they're usually more stable and less likely to bounce than a typical collapsible metal bed frame/ box spring combo. They feel more like sleeping on a mattress placed directly onto the floor, which can often help you sleep better (but which, if you don't live in a group house with at least one roommate named "Dank Keith," I don't recommend).

5. If you have wildly different schedules, prepare in advance

Does your honey wake up for work roughly 45 minutes after you go to bed? Working a different shift from your partner roundly sucks — when are you going to hang out? When are you going to have sex? Are you genuinely expected to wait until your partner has the day off to watch all these Parks and Recreation episodes on your DVR? — but stress from waking each other up is at least one thing that you can prevent.

And all you need to do to not wake each other up is plan your morning/ bedtime routine in advance. Do everything you possibly can in a room that's not the bedroom — dressing, undressing, what-have-you. Try to pick out your clothes in advance, so that you won't be banging around in your closet while your better half fruitlessly tries to hide under their pillow. I would also suggest investing in eye shades if you're a light sleeper (I am genuinely addicted to mine), so your partner feels like they can turn on a light if they absolutely have to. Because having your partner stumble around in the dark until they hurt themselves is a guaranteed recipe for getting woken up.

If blankets are contested territory in your house — either because you two prefer different temperatures while you sleep, or because one of you rolls up in the blanket like you're a caterpillar building a cocoon so that you can turn into a beauuuuutiful butterfly — getting two separate blankets will transform your life. You can even buy two of the same blanket, if you're afraid that having two different blankets will look aesthetically bad, or make your friends think you're weirdos or something. Then, come bedtime, you're free to kick your blanket off or roll yourself up like a little Totino's pizza roll of sleep. Anyway you want it (your blanket), that's the way you need it (your blanket)!

7. If all seems lost, erect a pillow barrier

If you've got the king-sized bed, the mattress topper, the separate blankets, and you still feel like the person you love most in this world is trying to slide tackle you in their sleep, you can erect a pillow barrier: the final frontier in couples' sleep technology. It works the way it sounds: you build a tiny Berlin wall down the center of the bed, between your bodies, using throw pillows (or, if your bed is big enough to accommodate it, real pillows). If one of you goes berserk as soon as you fall asleep, these pillows should hopefully slow your roll (literally and figuratively).

And if none of these techniques work, and you end up needing to sleep in separate beds, here's a secret: those of us struggling with our pillow barriers and separate blankets envy you desperately. You're not a failure, you're living the dream! Enjoy it, hombre.