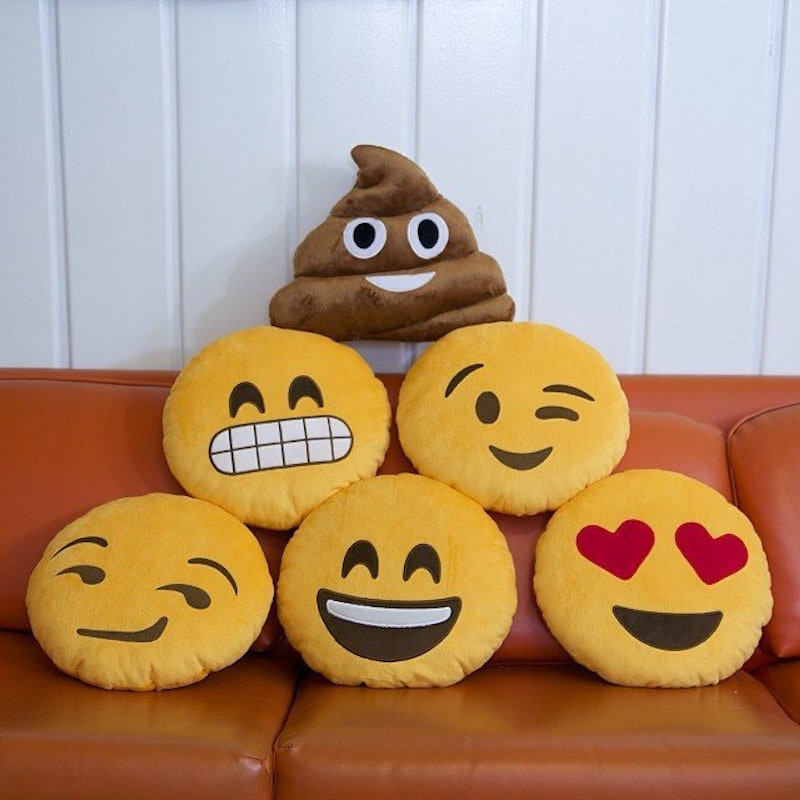 In case you needed any more proof that people in the U.S. are absolutely obsessed with using tiny little pictures to illustrate their every mood, here you go: According to Match.com's Singles in America survey for 2015, people who use emoji have more sex. And no, I am not making this up. Emoji usage apparently correlates with how much sex you have. Well...huh. Didn't see that one coming.

Match.com first began releasing the results of its annual Singles in America survey in 2011; this year's — number five, if you're counting — examined the attitudes and behaviors of more than 5,600 single adults age 18 and over through an online survey of more than 100 questions. Topics covered everything from love and technology to something they call “The Clooney Effect”; as such, it's probably not surprising that the sheer breadth of their findings ended up being quite expansive, indeed. For example, did you know that one of the top commitment fears for both men and women is being taken advantage of financially? Or that online daters are more likely to fall in love without being initially attracted to someone than offline daters? The more you know, right?

But obviously, the most important discovery was the aforementioned tidbit that people who regularly use emoji apparently have more sex than people who don't. By “most important,” by the way, I actually mean “most ridiculous”; I also mean “most entertaining,” though, because let's face it: That's hilarious.

Biological anthropologist Dr. Helen Fisher, who led the study, told TIME, “It turns out that 54 percent of emoji users had sex in 2014 compared to 31 percent of singles who did not.” Furthermore, the stats held true for men and women in their 20s, 30s, and 40s — which suggests it's not just a Millennial phenomenon or an indication of a generational gap. Interesting, no?

As always, though, we have to remember that correlation is not causation. Although we know that people who use emoji tend to get it on a little more than those who don't, we don't know why that is. I have a theory, though, and it's this: Emoji have become such a fixture of the way we communicate that they've also become an important part of the flirting and/or courtship process (whichever term you prefer). I mean, think about it: Online dating is by nature largely text-based (or at least, it is in the early stages of a relationship), which, while terrific in a lot of ways, has one major downside: You can't read things like tone or body language when conversing with a potential date. Emoji, though? They make it a little easier.

Okay, maybe not when you use them like that, but, well...hear me out. As Fisher noted, “Here we have a new technology that absolutely jeopardizes your ability to express your emotion…there is no more subtle inflection of the voice…and so we have created another way to express emotions, and that is the emoji.” They're markers: A winky face tells us something is meant flirtatiously; a smiley face denotes positivity, even if the words themselves don't sound positive on their own; and so on. Not for nothing did emoji develop its own set of grammatical rules.