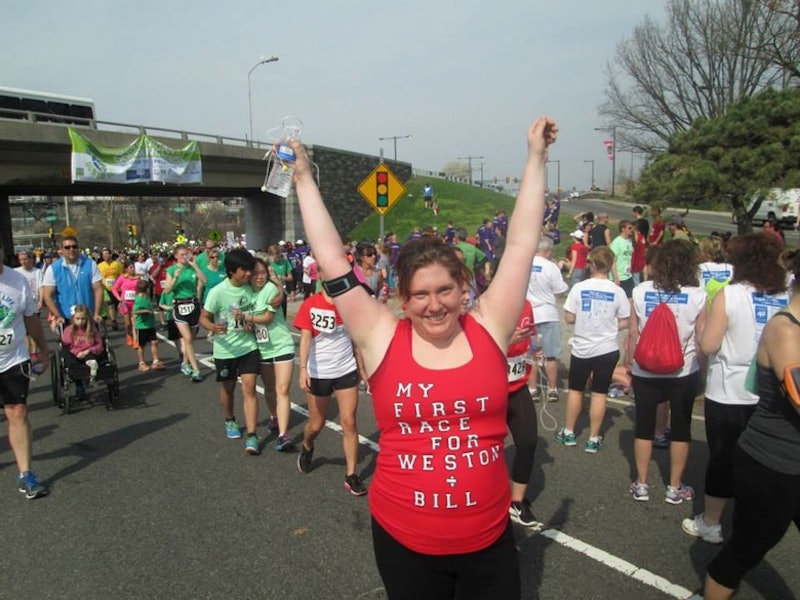 Editor's Note: February 22-28 is National Eating Disorder Awareness Week. Each day this week, we'll be featuring a piece about women's body image. And remember: If you're struggling with poor body image or an eating disorder, you're not alone, and help is available.

When you think of the phrase "eating disorder," who do you picture? Young girls with visible ribs poking out of their barely-there pubescent bodies? Teenagers with their heads dangling in a toilet bowl?

Most likely, you don't picture someone who looks like me. From a young age, I was praised for being a "good eater," meaning I was open to all different types of foods, and my weight was always "healthy".

Eating was a popular pastime in my family growing up, but cooking was left out of the equation. My mother’s goal each night was to serve a meal without using the oven, because she thought it made the house too hot. We ate packaged food covered in butter or cheese. Our proteins consisted of any meat my father could put on the grill, which oscillated between cheeseburgers, hot dogs, and pork loin.

At some point during my childhood, food became the reward. When my parents would have a major fight, or when my mom was sick in the hospital, my dad would bring me to a fast food place to eat. Over a Taco Bell Mexican pizza, he would promise me that things would get better, and that we would be a happy family one day. For a brief moment over that cheesy meal, I felt safe.

My mom had her first heart attack when I was twelve years old, and required an emergency quadruple bypass at age 43. That was the catalyst for other health issues, including several strokes, severe depression, and anxiety. It was a rare moment when my parents weren't fighting over her health, the inability to pay bills, or even how I was being raised.

My self-image, like most young girls, became skewed around the fifth grade. Not only did I want to look like the models on my WB shows or in my CosmoGirl magazine — I wanted to look good enough for my family to be happy.

During fall semester of my junior year, I began restricting myself to eating only kidney beans. My college roommates would beg me to eat something else. When I called home to lament to my mother about their negative overreactions, she only fueled the fire. “They're just bitter you're losing weight. Keep it up,” she reassured me over the phone.

My mother's weight yo-yo'ed throughout my childhood, and my father would belittle her for not being the size 8 she had once been. At night, I would sit at the kitchen table, watching her pop diet pills; each month, she'd try try a different brand that promised even better results. Sometimes, she would skip meals, but then, late at night, I would come down to find her binge-eating a container of cookies.

My mother never talked about exercise or eating in moderation. She never once considered signing up for a gym, or even walking around our neighborhood. After she became chronically ill when I was entering my teen years, she pushed her own looks to the side — and began to zone in on my appearance instead.

“We need to get you thinner, without that horrible stomach,” she'd say to me as a 17-year old. “You're just not that kind of thin girl like [insert skinny friend's name],” she'd point out.

For years, every time I left the house, I would ask her, "Do I look pretty, do I look skinny?"

My grandmother, my mother's mother, treated me similarly. Eventually, her routine remarks about my body made me anxious to even be around her. “Such a pretty face you have, if only you would lose weight,” she said during Thanksgiving, when I was 21. Within minutes, I went from feeling beautiful in my new red-cable knit dress, to barely being able to swallow a few bites of dinner.

When I would periodically attempt to exercise, my mom always made some negative comment. “You know people drop dead on the treadmill all the time,” she would say over her lit cigarette, when I would return home after my attempt at jogging around our neighborhood track. Another time, when I was being tested for a potential thyroid issue, my mother was downright giddy. "Oh, maybe now you can lose a bunch a weight if they put you on medication. It will be great," she exclaimed as we waited for the blood test results.

It was that night I learned that when the shower runs, it muffles the sounds of puking. Splashing my face with water, I felt an odd sense of relief. Although I had screwed up, I was able to fix my over-indulgence. I was 19 years old and a size 10. Is that who you picture when you think of someone who's bulimic?

Once I eventually moved out to go to college in New York City, I would get through a bad day by promising myself a decadent treat later. From buying myself a chocolate chip frappuccino every time I went to a class I hated, to eating two slices of white pizza after acing an assignment, food was a form of bribery.

Instead of spending my extracurricular hours playing softball and basketball like I did in high school, I was an editor of the college paper, an intern at a magazine, and spent most of my free time napping or drinking cheap beer. The effects on my body were evident.

During fall semester of my junior year, I began restricting myself to eating only kidney beans. My college roommates would beg me to eat something else. When I called home to lament to my mother about their negative overreactions, she only fueled the fire. “They're just bitter you're losing weight. Keep it up,” she reassured me over the phone.

Finally, after three months of total deprivation, I caved, and let myself have a crepe. Within minutes, the satisfaction of the treat turned into shame. The combination of the anxiety over breaking my diet — and the uneasiness my body felt after suddenly eating something rich — made it easy for the crepe to slide back up my throat.

It was that night I learned that when the shower runs, it muffles the sounds of puking. Splashing my face with water, I felt an odd sense of relief. Although I had screwed up, I was able to fix my over-indulgence. I was 19 years old and a size 10. Is that who you picture when you think of someone who's bulimic?

During my early twenties, I bounced between periods of binging and purging. When tears streamed down my face, it wasn't because I acknowledged that this behavior was destructive, but because the weight was not coming off faster. Those moments are some of the lowest points in my life, and I wish that would of have been my wakeup call, but that was still in the future.

Knowing that I was treating my body poorly scared me, especially considering the health problems that run deep in my family. My mother had her first heart attack at 42, and her first stroke at 44, while her father died at age 43 from a massive heart attack. Eventually, at 24, I found myself in the grips of a ugly depressive episode. I knew that I had to make a change, but I was not sure how to even begin to help myself.

Until one afternoon, when my three female co-workers and I were discussing what to give up for Lent.

“Why don’t we give up sugar, and processed food. We can focus on clean eating?” one of them mentioned as I slurped down my daily afternoon Red Bull. The three of them instantly became excited about the idea, and talked about all potential the health benefits. “Clean eating is a crock a sh*t” I thought to myself, even though I had no idea what it entailed.

At the time, my diet consisted of Red Bull, coffee, water, and 300 calorie frozen kids meals. The only thing I felt that I had control over was my ability to stay under 800 calories a day. But I agreed to join in, even if one of my main motivators for doing so was to show my coworkers that clean eating was bullshit.

So it began. I donated all of my canned and prepackaged foods, leaving my pantry bare. A friend took me to the grocery store and gave me a lesson on healthy shopping. We went through every aisle, looking at labels and reading ingredients. The first thing I learned about clean, healthy eating was that reading the ingredients is a necessity. An item can have zero calories, but when it is packed with chemicals you cannot pronounce, chances are it is unhealthier for you than an all-natural 1,000 calorie burger.

Slowly, I opened up to my coworkers about how I did not even know the difference between the taste of processed and natural food. They did not shame me, but they did point out that this was an opportunity to develop a healthier relationship with food.

At the same time, I began going to the gym on a regular basis for the first time since my freshmen year of college. I had made a commitment to run my first 5K that April. Over the weeks of training, my body begin to change in a healthier way. Clothes fit better, workouts were more productive, and my skin looked fantastic. For the first time in my life, I had an appreciation for food's purpose of nourishing my body.

In April 2014, I ran my first 5k in 40 minutes. Lent ended later that month, but my relationship with food continued to improve. I let certain things back into my diet, but my newfound education about food had changed my mindset for good.

Of course, things aren't perfect. But with the help of therapy, I am trying to accept that the remarks spit out by my mother and grandmother are more about their own insecurities than they are about me. As I watch my mother pull awkwardly at her clothes while critiquing herself in the mirror, I feel a sense of sadness for her. I know that her body is not the real thing that is bringing her so much discomfort.

When I made the mistake recently of telling my mother that a new medicine I was taking was decreasing my appetite, she said that it would be a great thing to help me continue losing weight. Instead of fighting with her, or listing all of the reasons why that was messed up, I just made a mental note to not bring it up with her again.

While my mother and grandmother may never give me the unwavering support I desire, I have welcomed other female role models into my life who demonstrate the positive effects of a healthy body image to me.

I now know that in order to live a healthy lifestyle, nourishment is required in all forms — physically, mentally, and spiritually. If I ever hope to break the cycle of self-hatred in my family, then I must make a continued effort to eliminate the junk from my life — in whatever form it takes. It ends with me.

More like this
10 Thanksgiving Alternatives You Can Celebrate This Month
By Katie Mitchell
Wimbledon Alters All-White Kit Rule Amid Candid Period Discussions
By Catharina Cheung and Rachel Mantock
The 15 Best Reading Journals For Book Lovers
By Debbie Lee
Bustle Newsletter: November 15, 2022
By Hannah Orenstein
Get Even More From Bustle — Sign Up For The Newsletter