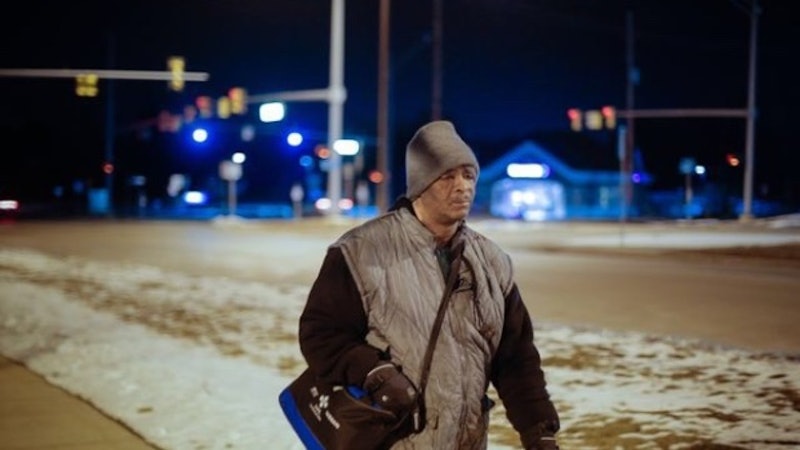 56-year-old Detroit resident James Robertson's daily commute to work sounds a lot like the old saying: When I was your age, I had to walk ten miles to school — uphill, both ways. But there are two big differences between Robertson’s work commute and our elders’ tales about their treks to school back in the day: Robertson’s commute is a reality, and it’s happening today.

Five days a week, Robertson walks 21 miles from his home in the city to his factory job at Schain Mold & Engineering in the suburbs, the Detroit Free Press reported. Ever since his car died ten years ago, Robertson has been walking to work rain or shine. He treks through dangerous neighborhoods and walks home late at night after his shift ends at 10 p.m. On most nights, his commute only allows him to get two hours of sleep. Even more impressive is the fact that Robertson has a perfect attendance record at work, in spite of this commute.

But while Robertson’s determination may be unique, his situation hardly is. Over the course of the last 16 years, participation in the U.S. workforce has declined significantly. While there may be jobs available, oftentimes the workers that need those jobs simply can’t get to them.

Robertson certainly isn't making this grueling journey by choice. When his car died ten years back, Robertson couldn’t afford to buy, insure, and maintain a new car with his wage of $10.55 an hour. The next obvious option would be public transportation, but Detroit buses don’t cover a large part of Robertson’s route to work.

Public transportation systems in Detroit, and in countless other cities across the U.S. are failing the people who need them the most. As CityLab points out, cities across the U.S. consistently vote to to defund public transportation, leaving many to make a choice between mobility and the additional expense of a car. With other expenses already piling up, many people are apt to forgo mobility. This lack of mobility is a big hindrance to economic recovery.

But this Detroit man’s story should mobilize more than just efforts to get him a car; Robertson’s situation should be a wake-up call to the bigger problems lurking beneath this one man’s predicament. A four-hour commute should not be requisite to earning a living wage.

However, as unemployment rates in Detroit hit almost 25 percent, workers are being forced to look outside of the city limits for work. But as more Detroit residents leave the city for work, the city’s mass transit system continues to decline. Yet, no one is addressing the root of the problem in Robertson’s case. They're giving him the funds to get a personal vehicle, but failing to address a problem that's scale extends far beyond personal.

This decline is a problem for everyone. When less people are working, the U.S. economy is threatened. While everything might seem all peachy with the U.S. economy right now as unemployment rates are down to 5.6 percent, Gallup CEO Jim Clifton points out that these numbers don't actually reflect reality. That 5.6 percent figure leaves a lot of unemployed people out the equation, including those who work part-time but want full-time employment, those who are underemployed, and those who are having such a hard time finding a job that they haven't looked in the last four days – just to name a few.

Moreover, when people lose the mobility necessary to access the jobs that do exist, the burden upon the rest of society increases as those who are unemployed rely more upon assistance. So while the overwhelming effort to help Robertson is certainly generous, it still doesn't address the real problem at hand. James Robertson isn’t the only one who needs a ride to work.