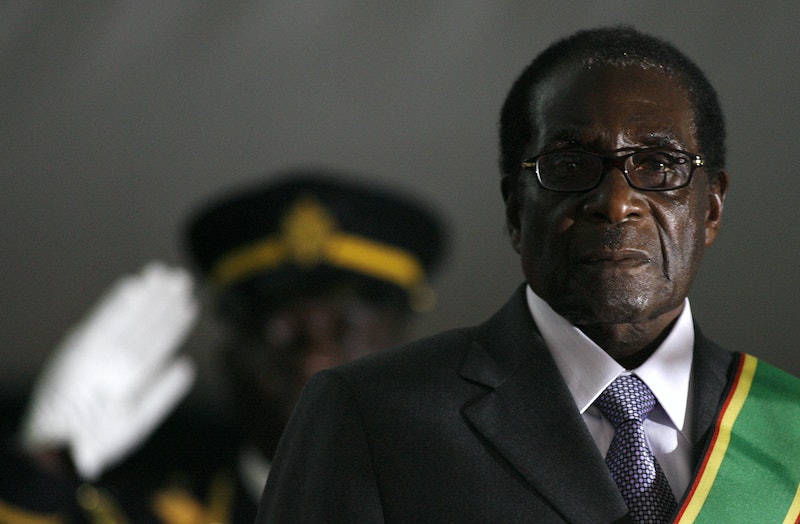 The 90-year-old president of Zimbabwe, Robert Mugabe, fell down a flight of stairs on Wednesday. His literal fall from grace is far from the only news; he allegedly ordered that journalists in attendance delete any photographic evidence from their cameras. Whether the fall happened because of ill health or a simple misstep, the allegations against the leader serve as a powerful reminder that freedom of the press continues to be threatened by his regime.

Mugabe had just returned from an official trip to Ethiopia. Following his homecoming, the president delivered a speech and after walking away from the podium, he fell to his knees and down a small staircase off the stage. His aides quickly grabbed him and escorted him to an awaiting car.

The purpose of Mugabe's speech was to address his nation's newest role as the Chair of the African Union (AU).

"Real progress" includes freedom of the press, and ensuring that journalists have a protected right to report and publish as they see fit. (Progress also involves ensuring LGBT rights, which Mugabe has consistently and dramatically refused to do.) If the allegations that unfolded after the fall are correct, Wednesday is simply another testament of Zimbabwe's suppression of the press.

According to the Committee to Protect Journalists, a Zimbabwe Broadcasting Corporation camera operator, Edward Chikomba was suspected to have been killed by government officials in 2007. His abduction and later death is thought to be linked to his alleged role in leaking footage of an opposition leader who was seriously beaten during police custody. The footage aired on foreign media and resulted in global condemnation of Mugabe's regime.

The abuses continued into the 2013 elections. The Guardian reported on the abductions and detainments of four Zimbabwean journalists during the election cycle by security staff of a political party (not Mugabe's) and other unknown assailants.

If Zimbabwe is to be a leading state of Africa, serving as a model for the entire continent, as Mugabe purports to want, then serious reform needs to occur — including protection of the press. Until that happens, Zimbabwe will remain an example of an oppressive state governing though carefully orchestrated censorship. It remains a dangerous place for journalists seeking to shed the truth on a regime with a precarious human rights record. If Mugabe doesn't want the world to see a slightly embarrassing fall, what else is he hiding?