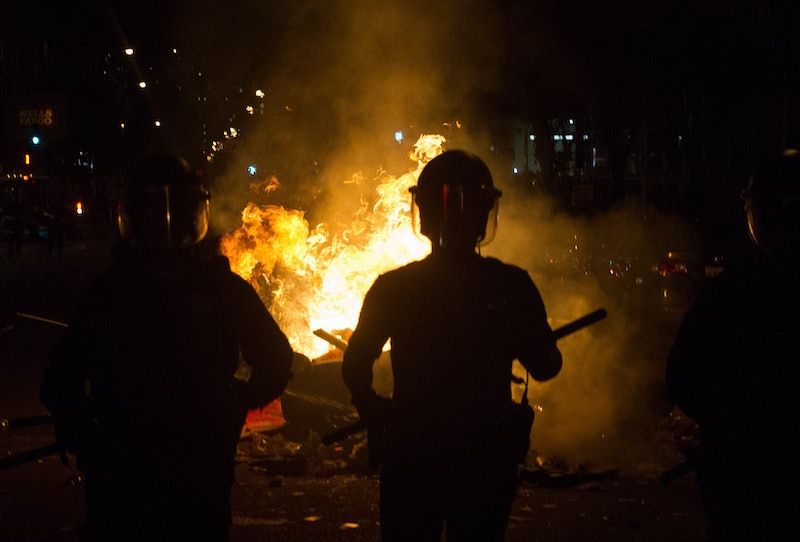 Just last week, three major fires destroyed buildings in San Francisco and displaced around 100 residents, many of whom were living in rent controlled apartments. One such former tenants were paying only $1,100 a month for a two bedroom in the trendy Mission District, one of the most expensive areas in the city with an average rent price of $3,250 a month — and that's just for a one-bedroom. The family, originally from El Salvador, had moved to the predominantly Latin neighborhood in the early 2000s, back when $1,100 was a relatively average rental price.

In addition to having to rebuild their lives as well as seeking employment — one of the residents worked at a Salvadorean restaurant on the ground floor that was also destroyed by the fire — they'll have to combat a market that has becoming increasingly more skewed towards affluent residents undeterred by sky-high rent increases. Overall, SF rents are up 11 percent since last year. Monthly rental prices for a two-bedroom apartment have increased by nearly $2,000 in just five years' time from July of 2009 to July of last year — well over the amount that many were paying to live at the building located on 22nd and Mission, now completely decimated by a four-alarm fire that hit last Wednesday, Jan. 28. Total damage to the building, which included restaurants and shops on its ground level, was $4.5M, to say nothing of the $4M of belongings damaged inside.

Residents looking to find any form of housing in the city face seemingly endless obstacles. Nearly 31,000 potential rental units are currently vacant due to ineffective policies like the Ellis Act, which may give landlords a leg up on evicting tenants but forces the unit in question to maintain its previous rent.

Likewise, a public housing wait list that spans around 1,100 people makes it nearly impossible for lower income residents to know when, if at all, they'll be eligible to move into a place they can afford. Prior to the wait list reopening in January, nearly 33,000 names were on the waiting list but were subsequently removed when applicants failed to respond to SF's Public Housing Authority.

Those considering purchasing homes who may be eligible for the city's Below Market Rate home lottery have just a 1 in 10 chance of being selected. San Francisco's housing crisis isn't new by any means. The issue precedes the start-up boom and the dot-com boom — an inclusionary housing ordinance first hit the books in 1992. The city's short-comings in bridging the housing gap are only magnified with this latest crisis, that has the Red Cross stretched to the brink as they try to provide temporary shelter for residents facing a far more permanent problem.