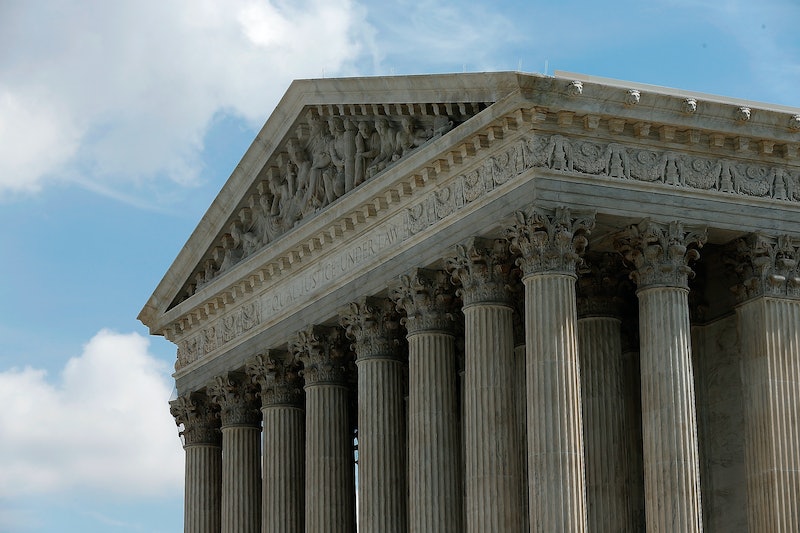 So here's a cheerful fact. We currently live in a country where a woman can legally be fired over breastfeeding because "men can lactate, too." At least that's the message the Supreme Court sent when they decided not to hear the case of Angela Ames who alleges she was fired from Nationwide Insurance after trying to get her employers to provide her with a place to pump breast milk. And if you think all of this sounds outrageous, I can assure you, it only gets more so.

According to Ames's account, after returning from maternity leave, she was informed that she would not have access to a room in which to pump breast milk for several days until her "paperwork had processed," something she had not been told before. She was told that in the meantime she could try to use a room used by sick employees, though it was occupied at the time she inquired. Since breastfeeding or pumping breast milk isn't something that can be put off indefinitely, Ames says she went to speak with her department head who instead coerced her into writing and signing a letter of resignation, telling her "just go home to be with your babies."

Yes, in the 21st century, this happened. A workplace basically sent the message that if women want to be mothers, they should stay home with their kids — because God knows no one at the office is going to even provide the bare minimum necessary to allow you to make being a working mom possible.

You know that "Nationwide is on your side" motto? Well, if you're a woman, it doesn't seem like it.

The even more outrageous part of all of this, of course, is that the trial court apparently did not consider this to be a case of sex discrimination, since they found that Ames did not take sufficient steps to complain internally — even though she went to her department head, who responded by forcing her to resign. But even if she had taken what the courts consider "necessary steps," apparently, the original trial court claimed her firing would still not be a case of sex discrimination because, and I quote, "men can lactate, too."

And while that's true, to claim that it somehow means firing a woman over breastfeeding is not a gender-based issue is to be willfully obtuse to reality. Ames was fired because her company refused to make basic allowances for a biological process that is coded as female and is almost exclusively undergone by female-bodied people. The fact that biological sex does not divide into stark, all-or-nothing, binary categories does not change that fact. To fire a woman because it would be too much bother to give her a place to pump breast milk is absolutely sex discrimination.

Unfortunately, the Supreme Court declined to take Ames's case, leaving the verdict of the trial court intact. So this lunacy is allowed to stand.

Welcome to America! Where gender binaries are completely biologically determined and totally absolute when we're refusing to recognize trans people, but as soon as it's time to give women rights in the workplace we can't wait to talk about male lactation.