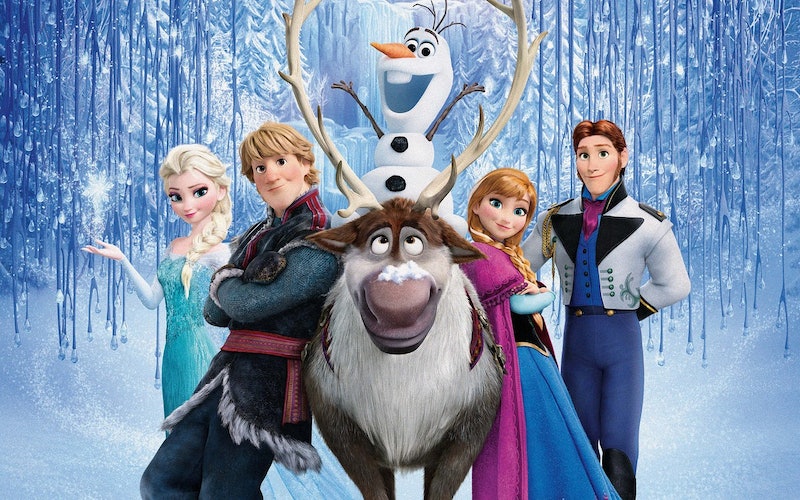 Fox and Friends is at it again. The talk show with a name like a children's book has decided to take on the kids' movie Frozen, and the results couldn't be more comical. On Wednesday, Steve Doocy described on Fox & Friendshow Frozen is helping to emasculate men in movies. Doocy dubs it the Frozen Effect — no, not the baby naming phenomenon in Sweden or the music-driven movie-making trend in Hollywood — and points to characters like Kristof and Hans as "fools and villains," going so far as to call them "evil and cold and bumblers."

Doocy thinks Frozen sends the wrong message to little boys, and to help back him up on his opinion that the real evils of the world are taunting him on the silver screen, he asks Concerned Women for America CEO and president Penny Nance to talk traditional gender role shop with him. Nance's CWA is all about Biblical values like supporting Israel and telling the UN to shove it, making her the ultimate authority to discuss male roles. Says Nance on the vile atrocity that is Frozen:

It's not good social science. When we bring our daughters to see Frozen or whatever the movie is we often have our little boys sitting there. Is this message helpful? We want them to know that they’re essential. We want to raise heroes. We want to raise real men that will stick in their families and be great dads and great providers and great husbands.

Acting as a mock representative for Disney, Doocy says, "If you were to make that argument to Disney or someplace else, they might say, well, you know, we just thought we would have some fun and it's easier to make fun of men than women, or what?"

Nance again voices her support for empowering men, but gets pretty bummed out about it coming at the expense of men. She then throws in an unnecessary and completely tasteless reference to Aurora, CO shooting victim Joe Blunk, who died protecting his girlfriend. Because there's no other way to hammer home your point about male providers and their essential roles in a Biblical-driven society than by throwing tragedy into the mix:

I would suggest to Disney and to Hollywood, "Lets be honest. You know, in a family it's important to have both a mom and a dad men are essential to our society." Steve, [Doocy] I was looking back at Aurora, Colorado and this great guy named Joe Blunk was the guy that threw his body over his girlfriend — over his young girlfriend — and saved her life. We want to raise real men. We want to encourage masculinity and not villainize masculinity.

She then further ruins your day after Doocy comments on how "it would be nice for Hollywood to have strong male figures in those kinds of movies." If David Bowie's "Heroes" isn't stuck in your head after she agrees with Doocy and proclaims, "We both can be heroes" then, well, sorry to do this to you. I know you're waiting for the low-hanging joke that everyone's probably already said so, here it is — Let it Go, Fox and Friends.