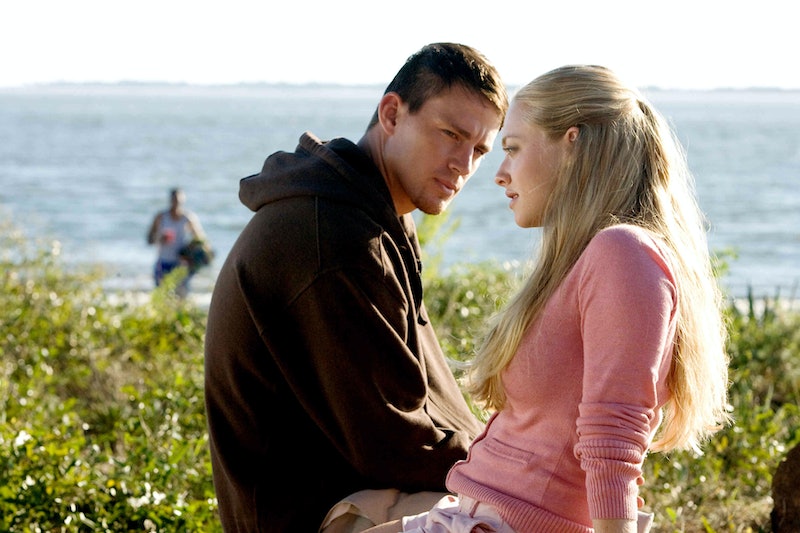 Everyone knows Nicholas Sparks is the ultimate romantic. So with the fifth anniversary of the Dear John movie on February 5 I decided to put his words to the test. I set up a Tinder profile like I was Channing Tatum's John Tyree character and used only quotes from Dear John to talk to my matches. Would the women be able to tell that I was using Nicholas Sparks quotes? Would they swoon over my romantic prose? I was determined to find out.

First I had to set up the profile. I didn't want to use pictures of Channing Tatum's face because people would be instantly suspicious, so I settled for a shirtless picture of his from the film. I cropped it so you could only see his chest (classy) and added a photo of the beach from the movie's poster. I was skeptical that I would get any responses. I know I automatically reject anyone who doesn't show their face, and I say no to shirtless photos, too, because those dudes tend to be tools.

I was right about it being hard to get matches. I swiped right for 700 women in the age range of 18 to 55 within 100 miles of me. You think Tatum's abs would have the women pouring in, right? Not even close. I only matched with 42 women. That's a six percent acceptance record.

But even with the women I did match with, I had a hard time keeping them around. Over half the women unmatched me as soon as I sent my opening message. That's a shame because I had a variety of Dear John quotes to work with and tried to keep things casual for the first message (aka no mention of love, which is really hard to do when you only have Nicholas Sparks quotes at your disposal).

Surprisingly (not), women weren't super into my lunar observations or my borderline obsessive interest in them. Twenty of these messages never received a response. It's so hard being a romantic guy these days. A disappointing number of my actual responses, though, came from women who were, shall we say, less interested in what I had to say. I started to notice a formula with their responses which lead me to believe they were spam accounts, but I didn't let that stop me from showering them with flowery, loving words. I encountered 11 of these spam accounts throughout my experiment, which was a quarter of my total matches.

But even the matches that weren't spam accounts didn't like me much more. Despite the fact that in Nicholas Sparks' fictional world these are sweet phrases, women who didn't know me found them (and my lack of pictures) much creepier.

As for getting away with stealing Nicholas Sparks' words? Nearly every woman who stuck around to talk to me knew exactly what I was quoting from. Out of the 11 matches that weren't spam accounts and actually responded to my messages, six of them called me out on what I was doing.

So what did I learn from all this? Well for one, women know their Nicholas Sparks movies. And secondly, it's just as creepy to pick women up with overly romantic prose as it is to use sexual puns. There is a time and place for lovey-dovey language, but it's definitely not when you first match on Tinder.