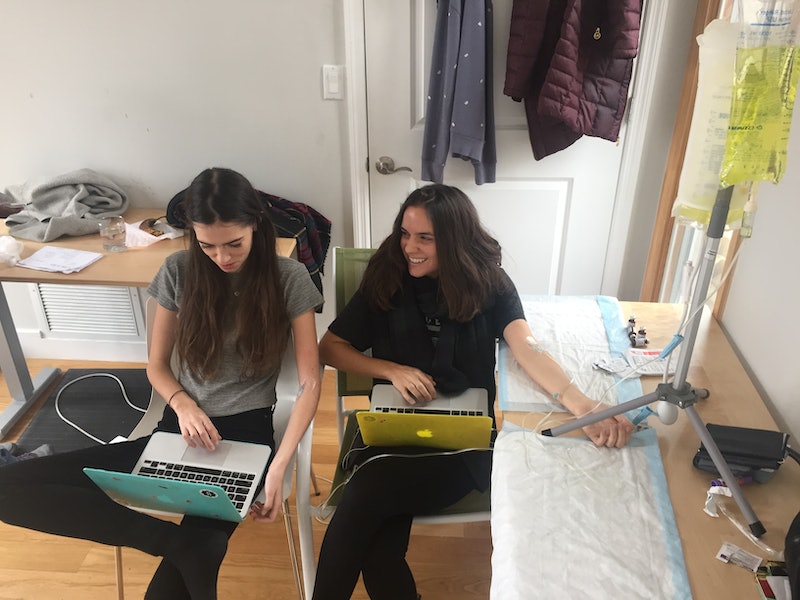 My friend Lauren's college roommate was an EMT, and he used to hook himself up to a hydrating IV drip when he was feeling rough after a night of drinking, a practice that seemed extreme to me at the time. I hadn't thought much of that hard-core hangover-curing measure since, until Cara Delevingne and Michelle Rodriguez posted a pic of their intertwined arms sporting matching drips in January of 2014. Apparently this was a thing people were doing — paying a couple hundred bucks for someone to come to their home after a night of drinking and set them up with an intravenous solution of hydrating fluids and anti-nausea meds to help ease their hangovers. When the NYC-based company The I.V. Doc got in touch with Bustle to see if we wanted to try out the service, I said yes.

Another editor and I scheduled the appointment for the morning after a company party, knowing that we would not be feeling our best, and would have a long day of writing and editing ahead of us. A representative from The I.V. Doc called me a couple hours before our 11 a.m. date and asked me a series of questions about my health and symptoms so that she could recommend a treatment package and secure a prescription. There were several available options:

I told her we wanted the treatment for a moderate hangover, opting for the Detox package, which cost $219 and included one 1000ml bag of a fluid and electrolyte-replenishing solution, and the choice of either an anti-nausea, anti-heartburn, or anti-headache medication to go along with it. At 11 a.m., a nurse, dressed in street clothes, arrived bearing all the supplies needed to make us feel like new. My hangover was relatively mild, while my co-worker Jenny's was pretty severe — she had met one of her remotely-based writers for the first time the night before, and of course they had to celebrate with shots.

I got hooked up first — I have a mild fear of needles so wanted to get it over with — and settled in for the 30 minutes it took for the two bags of medicine to drain into my arm.

I had apparently forgotten that my least favorite part of a recent emergency appendectomy was not the painful recovery but the fact that I had to have an I.V. in my arm for three days. Why did I agree to this again? Also, I faint when getting blood drawn. Great idea, self!

The nurse was a pro, expertly inserting the I.V. so that I didn't even get faint and clammy when it happened. There was an odd cooling sensation in my left arm as the liquid began to enter my veins, but it largely dissipated and I spent the next 30 minutes distracting myself by surfing the Internet with my right hand. Jenny was next up.

After we were both hooked up, we of course couldn't resist documenting the occasion.

Thirty uneventful minutes passed, the nurse removed the I.V.s, and we turned to each other to assess our symptoms.

I was feeling better — the kind of better usually easily achieved by an egg sandwich, a fountain Coke, and a short nap, but better nonetheless. Jenny experienced a brief rebound, but within an hour she was still nauseous, fatigued, and feeling pretty damn awful. When I told my contact at The I.V. Doctor, she said that, had she known Jenny was in such rough shape, she would have recommended the Revive Package for "deathbed relief" — it costs $269 and contains twice the hydrating fluid, plus the nausea, heartburn, and headache meds. Perhaps that would have done the trick.

So was it worth it? That depends on your symptoms and your budget. My nap-and-McMuffin remedy is considerably less expensive — though partaking in the former part of that cure is not feasible on a work day — and I find it equally effective when dealing with a mild hangover. As for the brutal, head-throbbing, nausea-plagued type of hangover, well, I've yet to find a simple cure for that, and perhaps The I.V. Doctor is it. Maybe if Jenny had opted for the Revive Package, she would have felt like new — but maybe not.

For now, I think I'll leave The I.V. Doc to the "European princesses and Olympic track stars" that, according to my over-protective mother's diligent research, reportedly patronize the service. My solution? Try not to get so drunk in the first place.

More like this
6 Abortion Advocates To Follow On TikTok
By Sara Youngblood Gregory
Every Single Big & Small Way You Can Fight For Abortion Rights
By Tess Garcia
The 7 Best Knee Sleeves, According To An Expert
By Andrea Hannah
This Viral TikTok Trend is Exposing Everyday Scams
By Sophia Moore
Get Even More From Bustle — Sign Up For The Newsletter