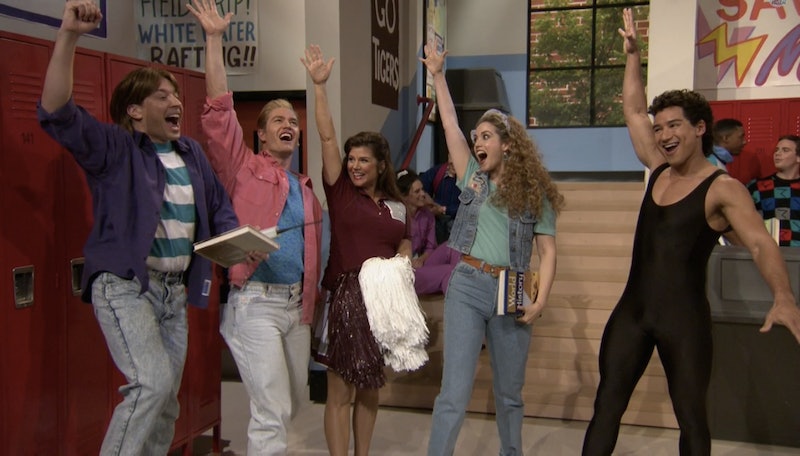 If you thought that there was no way that Jimmy Fallon would ever be able to follow up on his shot-for-shot remake of The Fresh Prince Of Bel-Air's opening theme, then you were wrong. Not only did Fallon nail the parody well, but it also seems to have given him an idea of what the people want: '80s and '90s nostalgia. On Wednesday's taping of The Tonight Show, Fallon joined the cast of Saved By The Bell for a trip down memory lane to the time when he attended Bayside High, and why do I even need to describe the clip to you? The cast of Saved By The Bell was reunited — and back in character. Feel free to ignore the rest of the article so you can watch the clip five hundred times.

The eight minute sketch united Mark-Paul Gosselaar, Tiffani-Amber Thiessen, Mario Lopez, Elizabeth Berkley, and Dennis Haskins as Zack, Kelly, Slater, Jessie and Mr. Belding respectively. As if that wasn't enough, we got a shoutout to the theme song, to the Zack Attack "Friends Forever" song, and even to Jessie declaring a rhythmic "I'm so excited!" The only thing that was missing from it all was Screech, but that was only to be expected. Dustin Diamond was arrested in December 2014, though why his absence meant that Lisa (played by Lark Voorhies) had to be missing too is really anyone's guess. Perhaps the latter was a simple scheduling conflict?

While it would have been nice to get the entire cast back together, I'm not going to complain about being able to get Zack and Kelly, and Slater and Jessie, and even Mr. Belding in one scene, back in costume and making the fans go wild. And go wild they did, as the incoherent screaming on Twitter still continues into Thursday morning.

Check out the epic sketch for yourself below.