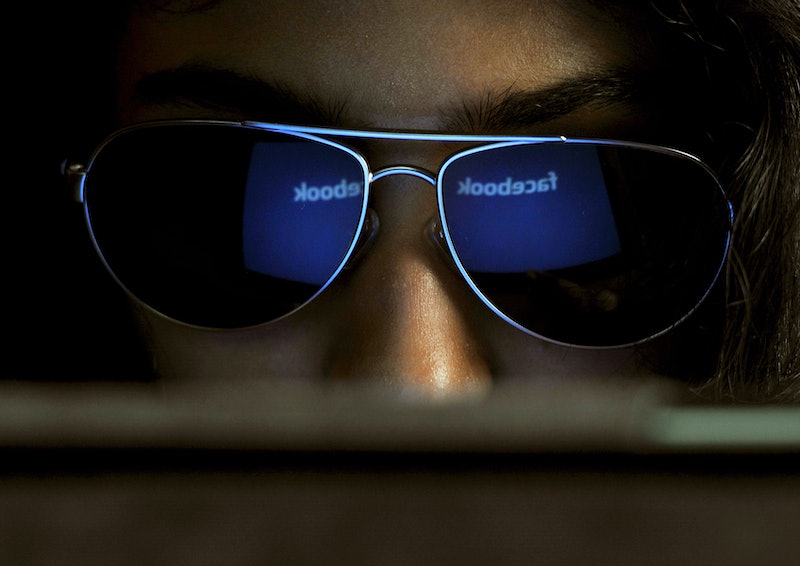 You probably won't be surprised to hear that yet another study has found that Facebook stalking can lead to feelings of depression — but this latest bit of research from the University of Missouri has an interesting take on the whole thing. Drs. Margaret Duffy and Edson Tandoc recently conducted a study to determine how Facebook usage affects us, and it turns out that people who use Facebook primarily as a method of surveillance — that is, to keep tabs on people they know without actually talking to them — are more likely to feel envious of their pals on the social network than people who use it to communicate and stay connected. It's sort of a “fear leads to anger; anger leads to hate; hate leads to suffering” thing, minus the trip to the Dark Side: Facebook stalking often leads to envy, which in turn can lead to depression. Let's take a closer look, shall we?

According to the Huffington Post, Duffy and her colleagues surveyed 736 college students from a large Midwestern university. It's worth noting that a whopping 78 percent of the subjects identified as white Americans, so we don't have a lot of data on anyone who falls outside of that demographic; additionally, 68 percent of the subjects identified as female, and the average age was 19. What they all had in common, though, was the fact that they used Facebook for an average of two hours every day.

The students then filled out a survey about their Facebook behavior, answering questions about how much they use it and what they tend to use it for. They were also asked to rate statements linked to envy according to how much they agreed with them: Things like, “I generally feel inferior to others” and “It somehow doesn't seem fair that some people seem to have all the fun.” Lastly, they were asked to rank statements linked to depression — such as “I was bothered by things that usually don't bother me” and “I talked less than usual” — by how much they agreed with them.

The researchers found that people who engage in “surveillance use” of Facebook — that is, folks who primarily use it to, colloquially, “Facebook stalk” people they know, but not interact with them — also experience symptoms of depression; however, those who use Facebook simply to stay in touch don't. The depression may be triggered by feelings of envy that arise from Facebook posts about things like vacations, new houses or cars, or happy relationships. Said Duffy, “We found that if Facebook users experience envy of the activities and lifestyles of their friends on Facebook, they are much more likely to report feelings of depression. Facebook can be a very positive resource for many people, but if it is used as a way to size up one's own accomplishments against others, it can have a negative effect.”

A number of other studies have also drawn the link between social media usage and depression, so that little tidbit isn't exactly new; what is interesting about this particular study, though, is the larger takeaway: Whether Facebook contributes to depression is largely dependent on how you use it. And you know what? That's actually a good thing. It means that we can remain in charge of the issue ourselves and take measures to mitigate the social media envy factor. As Duffy put it, “It is important for Facebook users to be aware of these risks so they can avoid this kind of behavior when using Facebook.”

It requires some careful self-examination — but if you can identify whether you tend to feel kind of icky after indulging in some Facebook stalking, then you can work on it by setting some ground rules for yourself. Maybe it's limiting yourself to a half hour of Facebook per day; maybe it's making sure you only use it to stay in touch with people and share things yourself; maybe it's jettisoning Facebook all together. Figure out what makes you feel better, give yourself some time to adjust to your new habits, and then carry on.

None of this is meant to minimize clinical depression, of course; after all, depression isn't just caused by one single thing — and a lot of the time, there are some biological things contributing to it which we may not have a lot of control over. If you're in that particular boat, definitely seek the help you need. But even so, it's comforting to know that we're not totally helpless in the face of Facebook-inspired envy and subsequent blues. Attitude shifts aren't always easy to make, but they're definitely not impossible as long as you're willing to put in the effort to do so.

And hey, whenever you find yourself getting jealous of your Facebook friends, just remember what we learned from Pat Regan's “Facebook Stalking Your More Successful Friends”: All that "success" is pretty much never exactly what it seems.

More like this
How To Protect Your Digital Privacy If You Need An Abortion Post Roe v. Wade
By Kaitlyn Wylde
What Is “Night Luxe?” Breaking Down TikTok’s New Aesthetic
By Courtney Young
TikTok Is Using A ‘Love Island’ Sound To Expose Their Weird Crushes
By Courtney Young
The Viral TikTok “30,000” Sound Fits Nearly Every Scenario
By Courtney Young
Get Even More From Bustle — Sign Up For The Newsletter