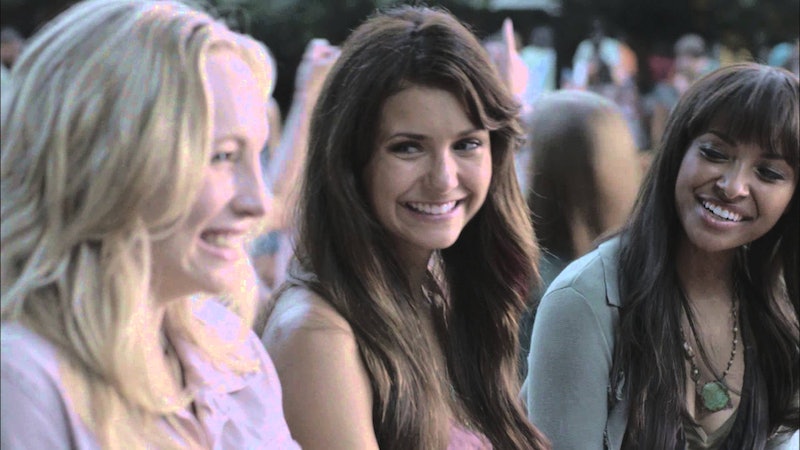 The CW Network's The Vampire Diaries premiered its fifth season tonight and it proved that you can leave Mystic Falls but you can never escape its drama. Caroline (Candice Accola) and Elena (Nina Dobrev) are officially off to Whitmore College, Jeremy (Steven R. McQueen) has been reanimated for the hundredth time and is going back to high school, Damon (Ian Somerhalder) is doing pretty much nothing as usual, and Matt (Zach Roerig) is back at the Grill following his globe-trotting (and threesome-filled) summer adventures with Rebekah (Claire Holt). As normal as it gets for Mystic Falls? Yes, but why isn't anyone asking questions?

Everyone seems to being living in blissed-out-post-high-school-graduation land where they all seem to have forgotten about their good friend Bonnie (Kat Graham) and Stefan Salvatore (Paul Wesley). Or they seem really convinced and are accepting that Stefan took off for three months without contacting anyone, not even to say good bye, and Bonnie went the same route but is sending postcards from beyond the grave, pretending to be alive. For a group of people that are notorious for not leaving well enough alone and asking too many questions for their own good, they're pretty satisfied with the shoddy and obviously false explanations for Bonnie and Stefan's absences.

Jeremy, who's in possession of seemingly endless supernatural powers, has been communicating with Bonnie's ghost, because of course. They're also still in some kind of relationship even though she's dead, which is nothing new for them considering they spent a significant time entertaining the same sort of arrangement in the past (when Jeremy was dead). In case we forgot, Bonnie died on the day of graduation during last season's finale... that was three months prior to this season's premiere and no one's figured it out yet? Not even her dad thought it was a little suspicious that his daughter disappeared and hasn't called, only sent postcards.

And seriously, Elena and Caroline, what kind of friends are you that you don't think it's strange when your third BFF, who's going to the same college as the both of you, doesn't want to move in with you? C'mon guys, the old Elena and Caroline would be all over this. I just don't get it. Granted, these two have both been busy with their respective love lives. Elena and Damon have pretty much spent the summer attached at the hip and basking in their "true love" and Caroline's been wrestling with the Klaus-or-Tyler drama (it appears she's chosen Tyler). It's a little bit of a stretch to say that none of these meddling kids have thought that it's strange that two of their closest friends are essentially missing.

Then there's Stefan, who's been drowning over and over again at the bottom of a river. He's disappeared before (cough cough his last Ripper-spree with Klaus) and who could blame him for doing it again after finding out that the girl he loves is in love with his brother? But still, Elena never leaves well enough alone when it comes to Stefan — she just can't (because deep down she knows they're meant to be together) and no matter how in love she thinks she is with Damon, she wouldn't just forget about Stefan. And she hasn't — she's just been avoiding the idea of him and so has Damon. Stefan, as she puts it, has been trying to contact her in a telepathic-type way from inside the safe. It's not until Silas, who looks like Stefan because Stefan is actually his doppleganger (ugh, not again), arrives in Mystic Falls to terrorize Catherine (who's now human) and tells Damon where Stefan actually is that he finally realizes how stupid he's been for not worrying about his brother. Yup, you're stupid, Damon.

Damon and Jeremy are the only two characters with any information by the end of this episode about the whereabouts of Stefan and Bonnie. Damon refuses to tell Elena because he doesn't want her to come home from college (where her dorm is obviously unrealistically awesome, like every TV/movie college dorm ever) or maybe because he's afraid she'll come to her senses and realize that Stefan is her "true love." Very selfish, Damon, really. Very selfish of everyone, really. Jeremy is STILL the only one that knows about Bonnie and it doesn't look like he'll be sharing that information any time soon. How long will it be until Caroline and Elena catch on that she's never going to show up for college? Or will they not notice because someone or something is looking for them on campus?

As per standard, the body-count has already started this season with Caroline and Elena's vervain-drinking roommate biting the dust on their first night out on campus and Silas slitting Bonnie's dad's throat in front of the entire town. Now that we're painfully aware that there's something rotten in Mystic Falls, how long will it take its inhabitants to realize it too? Also, Stefan is really important, so everyone had better hurry up and remember/save him. YOU'RE BETTER THAN THIS, GUYS.

More like this
Legacies Showrunner Said There Is Still Hope For More Vampire Diaries
By Gretchen Smail
Everything You Need To Remember Before Westworld Season 4
By Brad Witter
At 14, Kate Berlant Had A Wheelie Backpack & One Line In 'Lizzie McGuire'
By Samantha Rollins
Don't Expect To See Your Fave Modern Royals Depicted On 'The Crown' Season 6
By Jack Irvin
Get Even More From Bustle — Sign Up For The Newsletter