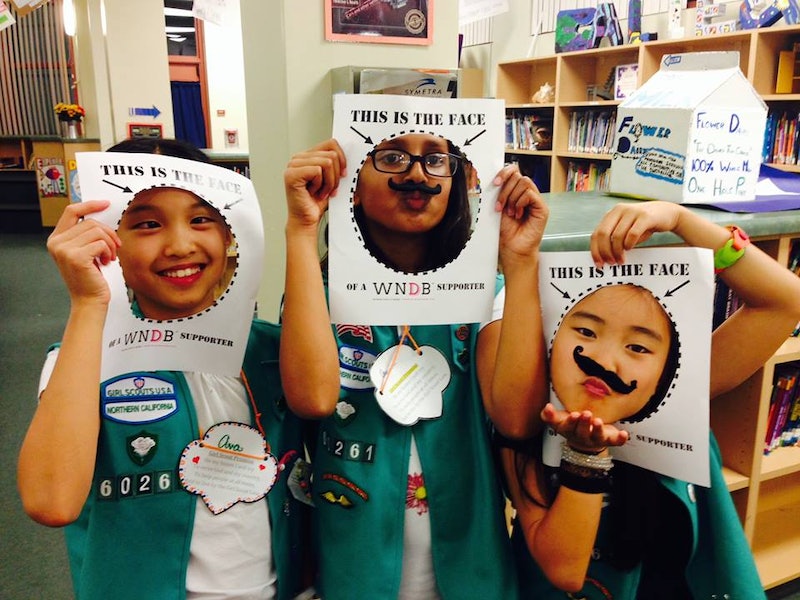 Last year, Book Expo America's first BookCon readers convention announced its line-up of 30 children's and young adult authors, and they were all white. In response, the We Need Diverse Books organization began, working hard to promote diversity in children's literature across the country, and running a super successful IndieGoGo campaign whose message spread all across the publishing world. However, some are concerned that Book Expo America may not have gotten the message. Thursday, they announced the panel participants for the Children's Book & Author Breakfast, and again, they're all white.

To be fair, there are only four authors represented, but all four are white, with only one woman: the exceptional Rainbow Rowell. She joins host Nathan Lane, The Day the Crayons Came Home author Oliver Jeffers, and James Patterson. Look, all four are supremely talented and this isn't to take away from their success and the definite validity in participating in the author breakfast, but would it have been hard to find a person of color to join the fray?

Particularly, I'd argue, after an amazing American Library Association Youth Media Awards ceremony that spotlighted so, so many incredible, diverse authors and books. And probably even in Book Expo America's best interest after the backlash in 2014. It would be a win-win, for us book lovers and BEA itself. But instead, the backlash is back, and rightfully so:

It's worth noting that the headliner at BEA this year is Jonathan Franzen, but there are no real details on what other authors will be participating. But if it's not chock full of deserving authors and books that represent diverse perspectives, it's a true shame, not to mention a total disaster for the legitimacy of BEA in the future.

I'll even help you out, BEA, because this cannot continue. If you're looking for some POC to include in your panels who have a children's or YA book coming out this year, here are a few names. You know, just off the top of my head.

To All The Boys I've Loved Before was a smash hit in 2014, and her sequel P.S. I Still Love You is coming out in 2015. Plus, she's part of the writing team that brought the incredibly successful Burn for Burn trilogy to life, and has the major Summer (starting with The Summer I Turned Pretty) series under her belt, too. So, yeah, she checks all the BEA boxes.

Rita Williams-Garcia is behind the incredible series that kicked off with One Crazy Summer and several other successful books. Her award shelf is stacked with a Newbery Honor Award, Coretta Scott King Award, a Scott O'Dell Award for Historical Fiction, and the PEN/Norma Klein Award. Oh, and she just happens to be publishing a book in 2015, Gone Crazy In Alabama, the third installment of her insanely successful series.

Sharon M. Draper is a (count them!) FIVE-time winner of the Coretta Scott King Award, with so many other awards that it would be hard to count. This year, she's publishing a children's book that's already getting loads of advanced buzz, Stella by Starlight.

Renee Watson, an accomplished children's book author, just this week released her incredible (just ask every critic on the Internet) young adult novel This Side of Home, and as a bonus she's a noted performer who has put on a one-woman show at the Lincoln Center in NYC, so she can handle the stage, BEA.

Marie Lu is a young adult shining star. And her 2014 middle grade series The Young Elites just solidified her place as one of the best in the biz these days. So it's perfect for BEA that she also happens to be releasing book two of that series in 2015.

And there are probably a dozen or so writers we could all add to that list of BEA candidates, so they should think a lot harder about what they're telling not only the literature community but the world with their panel selections.

More like this
Idris Elba & Tom Hollander Lead This Year’s Must-Watch Christmas Flick
By Maxine Harrison
Allie Rowbottom Will Have Her Feminism With A Side of Botox
By Samantha Leach
The 'Firefly Lane' Book Ending Teases Way More Tears To Come In 2023
By K.W. Colyard
'Bridgerton' S3 Teases Exciting Social Season For Penelope Featherington
By Bustle
Get Even More From Bustle — Sign Up For The Newsletter