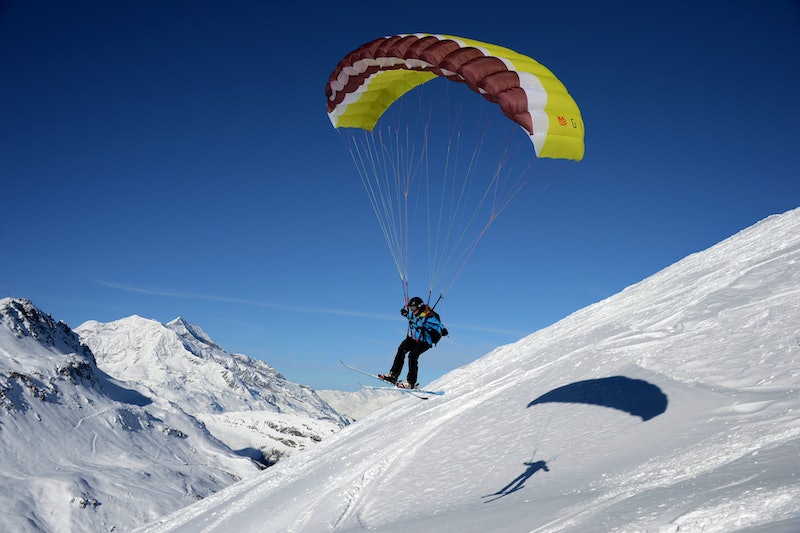 Speed riding, an extreme sport that combines freestyle skiing with parachuting, sounds terrifying on its face, but this video suggests that it might also be incredibly beautiful and maybe even meditative. Throwing your body off a mountain: totally relaxing, right?! Filmed during a speed riding session in January, the video shows two “pilots,” Syd and Theo, as they ski and fly through the peaks of Val-d'Isère, a ski resort in southeastern France. Although the opening seconds of the video show the speed riders grappling with wind and rocky snow, they soon settle in to what appears to be a smooth, relaxing glide among the mountains. As a viewer, it’s surprisingly calming to watch the pair float above the slopes. The soundtrack—a soothing synthpop song from Darius—doesn’t hurt either; I imagine that if this video had been accompanied by the music from Psycho, we’d all feel a lot less relaxed.

It’s important to remember that although speed riding may look simple and breezy, it’s actually crazy dangerous. The sport, which is particularly popular in France and Switzerland, has been described in The Telegraph as “not a complicated sport, but staggeringly difficult and dangerous as hell." According to Speed-Flying.com, more than 35 people have died speed riding (or speed-flying, as it’s sometimes called) since 2006. The website suggests that the sport is so dangerous precisely because “it may feel safer than it really is,” prompting pilots to take unnecessary risks. Furthermore, the site claims, “Because you typically are flying at high speeds at a very low altitude, there exists the possibility of serious injury or death.” The sport does look awe-inspiring and thrilling in the extreme, but I, for one, am content to admire from the safety of my computer.