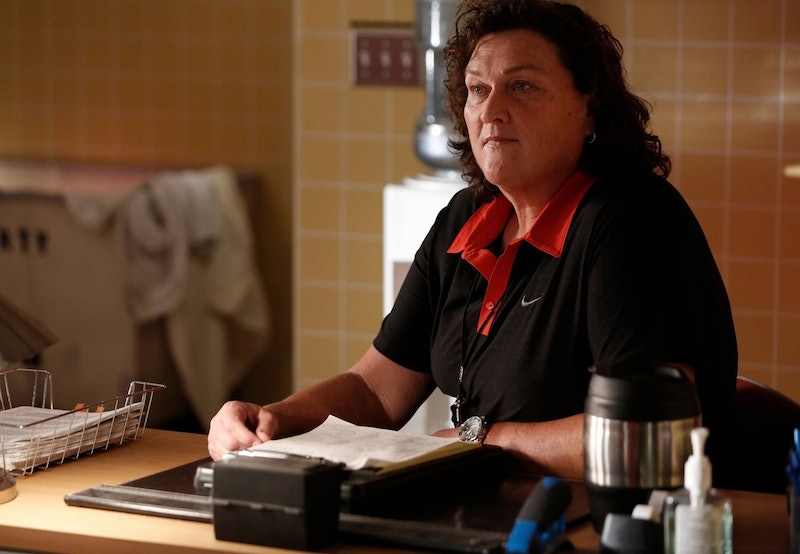 Next week is a big one for Glee, as they'll be unveiling Coach Shannon Beiste's new look. The Fox show previously introduced the story line a couple of weeks ago in which Coach Beiste admitted to Sue and Sam that he* identified as a man, and was coming out as transgender. In a rare show of empathy, Sue promised to support Beiste through it all.

Since then, actress Dot-Marie Jones took a break from the show, but, on Feb. 13 Beiste will return looking a little different: People magazine exclusively unveiled Beiste's new look on Wednesday and, unsurprisingly, the photo is already making the rounds on social media with plenty of commentary from fans and critics alike.

I hesitantly ventured to read the comments people were making on Twitter about Beiste's new look — honestly, I was worried they would be full of transphobia. And unfortunately, I was right, to an extent: There were some people who were angry at Glee for this story line because it's "wrong" to them. There were many others who were "grossed out" by Beiste's transformation. I saw a few "no thanks" and "ewww" tweets in response to the picture.

However, thankfully, I did see some other comments that gave me a lot of hope — not only were the majority of people excited for the story and supportive of Beiste, but a lot of attention was drawn to the pronoun usage. One user pointed out the importance of media sites referring to Beiste as a man. I know he's just a character and not a real person, but I think that it's still important to refer to him by his chosen identity. If we can do it for characters, imagine what that will mean for transgender people in the real world.

I also saw a vast majority of people who were happy the show was exploring this area, since transgender stories are so rarely told in mainstream media. It even got the attention of fans who had long ago given up on the show.

So yeah, there are negative comments, but there are always going to be those. It doesn't overshadow the fact that what I saw was the majority of people mentioning Beiste weren't even focusing on the picture of him as a man — they were just proud of the story in general.

That's how it should be. It doesn't really matter what Beiste looks like after his transformation. It just matters that the character is happy in his own skin, and that Glee is bringing awareness to an important issue. Hopefully, it will inspire viewers to respond with compassion to transgender people in their real life.

*Note: This writer will be referring to Coach Beiste using male pronouns because that's the way the character has chosen to identify.