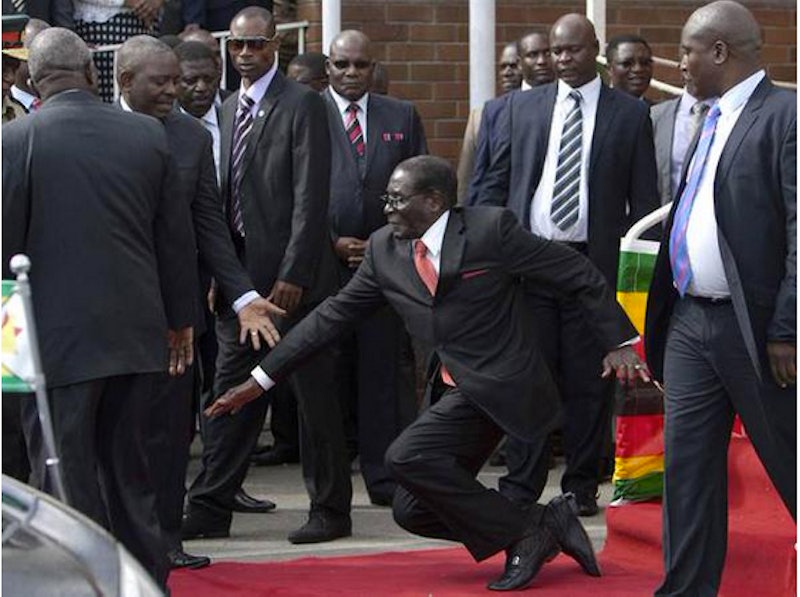 In the age of the all-powerful Internet, no one's actions are exempt from thorough scrutiny — and possible ridicule, because netizens are nothing if not brutally and painfully honest — and as the Zimbabwean government found out in the past few days, neither is its president. Robert Mugabe's fall on Wednesday prompted countless memes and a deluge of reactions on the Internet making fun of the incident.

ICYMI, Mugabe fell down the stairs of a podium on Wednesday after delivering a speech addressing Zimbabwe’s most recent role as the African Union (AU) Chair. Lest you think that's the worst of it, the move that cued the barrage of mockery was his and the Zimbabwean government's response to the fall — press photographers were ordered to delete the images of the 90-year-old leader's stumble, and Information Minister Jonathan Moyo pointed to other leaders that have slipped, like George W. Bush and, uh, Jesus, adding that Mugabe didn't even fall, anyway:

Obviously, that's not what happened. The Associated Press published a video showing Mugabe clearly falling down — which is totally fine in itself because humans fall all the time, but the fact that he went to such lengths to cover it up is perhaps cause for concern. Back to the Internet then, who was not about to tolerate such censorship and quickly turned the Zimbabwean leader's fall into #MugabeFalls memes.

While it might seem slightly cruel to make fun of a 90-year-old man falling — my conscience twinged a little — perhaps this could serve as a cautionary tale that even world leaders cannot escape the clutches of cyberspace.