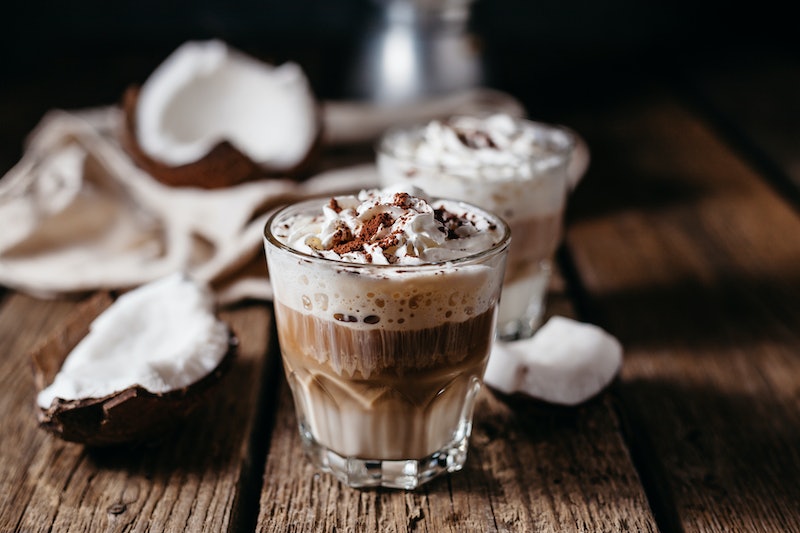 Yesterday, we found out that Starbucks is rolling out coconut milk as a non-dairy, non-soy milk alternative in stores nationwide on February 17. While a lot of folks have taken this to be pretty good news, some have expressed a little bit of concern over the ingredients: What, exactly, is in Starbucks' coconut milk? Is it “real” coconut milk? And what's "carrageenan" got to do with it? Well, yes, it's real coconut milk; but as is the case with most shelf-stable milk alternatives meant to be consumed the same way cow's milk is — in coffee, poured over cereal, with cookies dunked into it, and so on — there's a little more to it than that.

Here's the thing: There are a lot of different types of coconut milk, not all of which are meant to be used in the same way. The coconut milk you drink, for example, isn't the same as the stuff you use to make curries. So in order to clear things up a little, I did a little digging about each one. It's worth noting that I am not a food scientist, a chemist, or a nutritionist, so I am by no means an expert; nor is what's presented here the be-all, end-all of coconut milk primers. Still, though, what I found might be worth sharing. Ready to tease out the differences between all those varieties of coconut milk?

If you like to cook Thai dishes, odds are you're familiar with canned coconut milk already. It's made by simmering shredded coconut with water; the difference between coconut milk and coconut cream has to do with the ratio of coconut to water used to make it. Generally the ingredients list is pretty basic, consisting of coconut, water, and occasionally an additive like guar gum to preserve it. Guar gum is derived from the guar bean; although it can sometimes cause digestive problems, it's safe to eat in the quantities used for foods like coconut milk.

Boxed coconut milk is more or less the same thing as canned coconut milk; it just comes in a different container. You use it for the same purposes, and it contains pretty much the same ingredients: Water, coconut, and maybe an additive to make it shelf-stable. The advantage of boxed over canned is that it's BPA-free, although as The Kitchn notes, it might not taste as rich. The brand Aroy-D contains no additives — just water and coconut.

Refrigerated Coconut Milk in a Carton:

This is likely the stuff that Starbucks will carry — it comes in a carton, and you'll find it in the refrigerated dairy section of the grocery store (not on the shelves in the specialty foods aisle). It's meant for drinking in the same way that any other refrigerated milk product is: Cow's milk, soy milk, rice milk, almond milk, you name it. While you can't substitute it for canned coconut milk in curry recipes, you can use it as a milk substitute when baking. It's also similar to all the other non-dairy milk alternatives out there in that it usually has more additives and fillers in it than the canned stuff: Silk's refrigerated coconut milk, for example, contains coconut milk, cane sugar, natural flavor, carrageenan, and yam flour.

A note about carrageenan: There's been some debate over whether it's safe to eat, but the general consensus is that it's A-OK. According to HuffPo, there are actually two types of carrageenan, degraded and undegraded; the undegraded type is the one that's been approved for consumption by multiple authoritative bodies, including the FDA and the Joint FAO/WHO Expert Committee on Food Additives (JECFA). By the way, carrogeenan is also found in a whole lot of things you're probably already consuming: Specific brands of milk, cheese, yogurt, cream, almond milk, soy milk, and so on. Wellness Mama has a terrific rundown of what we do and don't know about the stuff, so head on over there for more.

The bottom line: It's fine to eat, but if it makes you nervous, then go ahead and avoid it. Totally your call.

You can also make coconut milk by adding water to either coconut milk powder or to concentrated coconut cream. The powdered form is pretty much like the coconut version of powdered milk; in addition to coconut, it can also contain things like maltodextrin and casein, a milk protein used to keep the product's fat from separating. Concentrated coconut cream is 100 percent coconut ground incredibly finely and packaged in a jar.

So there you have it. The TL;DR version is that different types of coconut milk serve different purposes; furthermore, they're all safe to eat. Bottoms up!