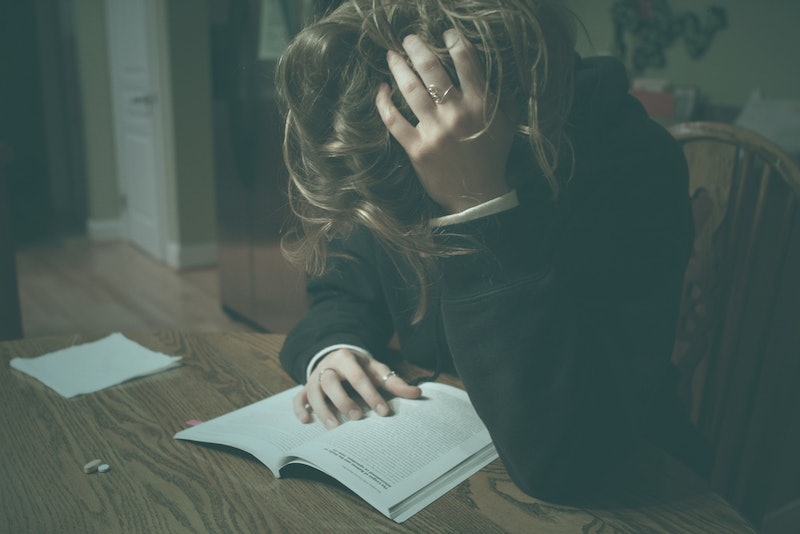 If you find that you spend the majority of your time stressing out over money, well, then ... welcome to America. According to a December 2014 Pew Research Center report, the number one thing that’s keeping Americans up at night and worrying is money. And while we can be excited that unemployment numbers are down (thanks, Obama!), the painful reality is that, if you adjust for inflation, wages have only risen two percent in the last seven years. That’s not just in some fields — that's across the board.

Meanwhile, the rich are just getting richer: The Pew Research Center found that the 20 percent of top earners in this country are making seven times more than that of those in the middle class salary bracket, and 70 times more than those who are at the very bottom of the income totem pole.

Of course, money isn’t the only thing stressing Americans out. Here are six other things that Americans are most likely to freak out about these days.

The American Psychological Association found that 60 percent of the population blames work for the reason they just can't feel relaxed.

A 2013 Work Stress Survey found that work-related stress is on the rise, with 8 in 10 employed people citing their job as a major source of stress in their life. Only 17 percent of workers in that particular survey could say that nothing about their jobs were stressful.

In 2014, the Harvard School of Public Health found that on top of being stressed about work, 51 percent of people find that their concentration on the job suffers because of stress.

For 47 percent of the American population, family responsibility is a major reason for the stress in their life. Between trying to financially provide for the family and the stress that comes with being a parent (77 percent said parenthood was stressing them out), the findings are not even remotely surprising.

According to another 2014 study, 35 percent of single parents and 35 percent of parents of teens also reported family to be the most stressful factor in their lives.

Forty-six percent of Americans cite health concerns as their main source of stress. And these concerns aren't just about personal health issues, but the health of the people around them, too: In 2014, the Harvard School of Public Health poll found that 43 percent of Americans are stressed about health issues, with 38 percent of those people worrying about their own health, and 37 percent worrying about the health of a loved one. The poll also found that people who are in poor health are twice as likely as those without serious ailments to report huge amounts of stress in just the last month.

The same year, a different study by the same Harvard group found that 49 percent of people suffered a major stressful event in the past year, and 29 percent of those stressful events were due to illness or disease, followed by the death of a loved one at 16 percent.

With divorce rates between 40 and 50 percent in the United States, it's no wonder personal relationships are a big cause of stress. Death of a spouse, drama within friendships, and loneliness due to the lack of a romantic relationship are all also reasons why 58 percent of Americans report relationship-related stress, according to the American Psychological Association.

Millennials, in particular, take a hit when it comes to how much relationship stress affects their lives. In 2013, a Harris Poll for the APA found that 59 percent of Millennials felt that the relationships in their life were the main reason for their high stress levels.

Not to be confused with health concerns, poor health on its own can cause stress, which is a vicious cycle, since stress can be the cause of poor health.

But the good news is, despite all this, Americans’ stress levels are decreasing. From 2007 to now, the average stress level on a one to 10 scale has gone from 6.2 to 4.9, so that’s something! See? If you look hard enough you will find the silver lining in everything.