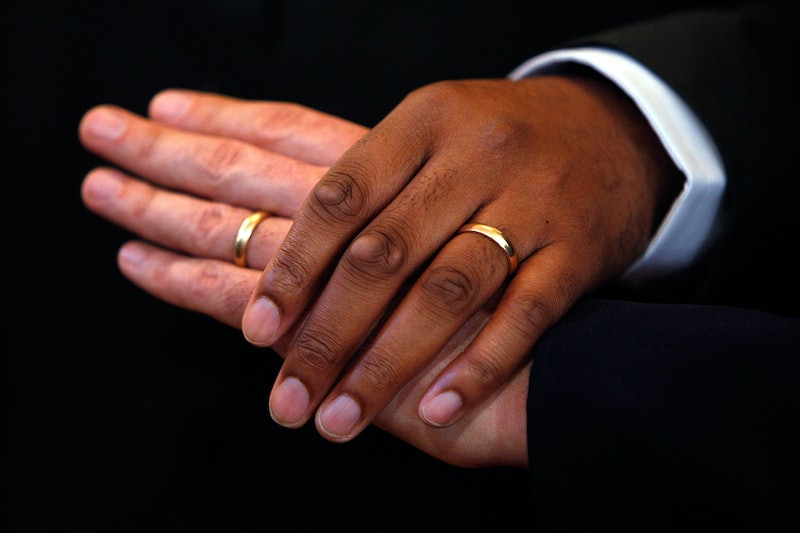 So in case you were looking for something to annoy you today and the rest of the Internet was letting you down, here goes. An conservative alliance of Catholics and evangelical Protestants is set to release a manifesto against gay marriage that calls it worse than divorce and cohabitation. And considering how opposed Catholics are to divorce, and how opposed pretty much all conservative religious people are to premarital sex, that's a pretty big statement to make.

The Evangelicals and Catholics Together coalition has predictably never been on board with the idea of gay marriage. After all, given that Catholics and evangelical Protestants really have nothing in common doctrinally, their main unifying factor is shared a conservative stance on social issues. They statement, which is to be published in the March edition of the conservative journal First Things, seeks to uphold the "truth about marriage," and laments the recent advances in marriage equality.

It states, in part,

The revolution in our marriage and family law, already well advanced, marches under the banners of freedom and equality. But these noble ideals are here gravely misapplied. When society systematically denies the difference between male and female in law and custom, our fundamental dignity is diminished, the image of God within us is obscured, unreality becomes legally established, and those who refuse to conform are regarded as irrational bigots.

The statement also adds that, "An easy acceptance of divorce damages marriage; widespread cohabitation devalues marriage. But so-called same-sex marriage is a graver threat, because what is now given the name of marriage in law is a parody of marriage."

Really? Really? You're really going to argue that people who make a loving commitment to one another do more to devalue the institution of marriage than Kim Kardashian's 72 day marriage? Because that line of reasoning is so flawed that people have been making fun of it, in exactly those terms, for years. And then here you went right out and said it anyway. It'd be cute, if it weren't so offensive.

Plus, from where I stand, such an argument is not Biblically supported.

If people oppose gay marriage on religious grounds, I can't stop them — I think they're wrong, but I accept there are all different ways to read the Bible. But if you're going to base your bigotry in Scripture, at least try to be reasoned about it. Saying that gay marriage is a bigger problem than divorce or cohabitation on religious grounds implies that God finds it more offensive. Which is just not borne out by the Bible.

The Bible talks about marriage a lot. It talks about divorce and proscribed sexual behavior a lot. You know what the Bible barely mentions at all? Homosexuality. I mean, if God really did care that much about the issue, if He cared more about it than premarital sex or divorce, you'd think he'd have talked about it more.

(Also, for the record, the Bible talks way, way, way more about how to treat the poor and underprivileged than it does about marriage, homosexuality, or sex.)

In other words, this new set of priorities isn't coming from God. It's coming from a group's own discomfort and personal prejudices. It isn't a ranking of things God finds most offensive but a ranking of things Evangelicals and Catholics Together finds most offensive. So if nothing else, thanks for making the hierarchies of your bigotries so plain.